The ATP World No. 16 and No. 18 players took to the court Sunday, April 7, 2013 at the Doug Mitchell Thunderbird Sports Centre for the penultimate Davis Cup by BNP Paribas Quarterfinals match. A victory for Canada’s Milos Raonic over Italy’s Andreas Seppi, would propel Canada to a historic first appearance at the semifinals in September.

Seppi came into this match having defeated Canada’s Vasek Pospisil on Friday, but any hopes he may have had of a repeat performance quickly vanished. Raonic gave him no quarter, taking the first two sets via a volley of service aces, 20 in total, that nonchalantly clocked over 190 km/h consistently. 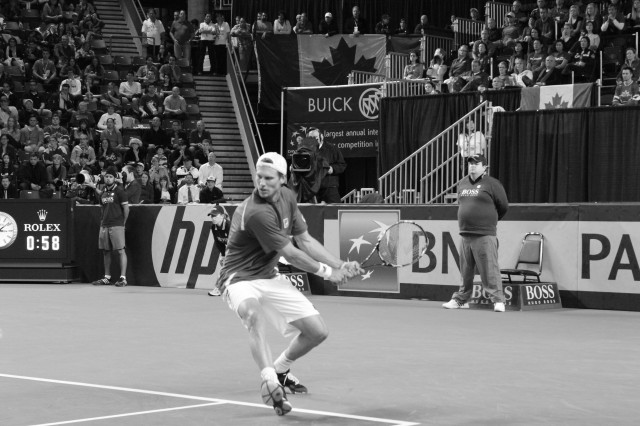 Continuing an Italian trend all weekend, Seppi stepped up his game in the third however, winning the set, 3-6, after taking an early 3-0 lead. Roanic commented saying, “I think Seppi had to play really well, I didn’t make too many mistakes. Of three of his five service games in the third, I had break chances on three of them, so it’s not like I got completely outplayed in that third set. I felt like I had opportunities, he just converted better than I did. He had break chances on way fewer games, so that’s just what it came down to. It’s unfortunate that set got away from me, but I just kept plugging away.” 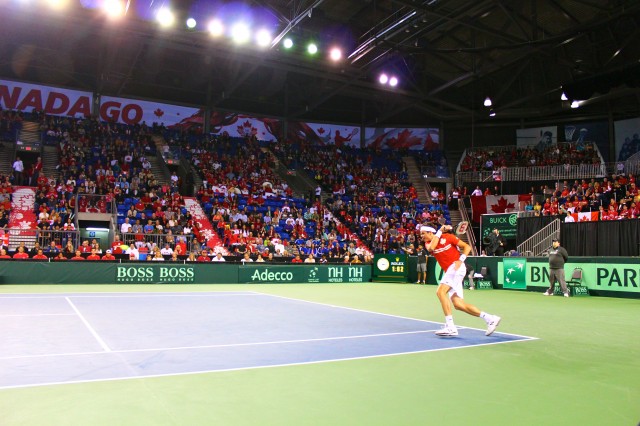 Early in the fourth set, Seppi would have yet another early opportunity to break Raonic, earning a break chance in the third game, but the 22-year-old Canadian would not be denied victory. Raonic would captured the final break on his second match point, dashing Italian hopes for a fifth and deciding quarterfinal match. In total, he went three for 10 on break points, while saving two of three that he faced. 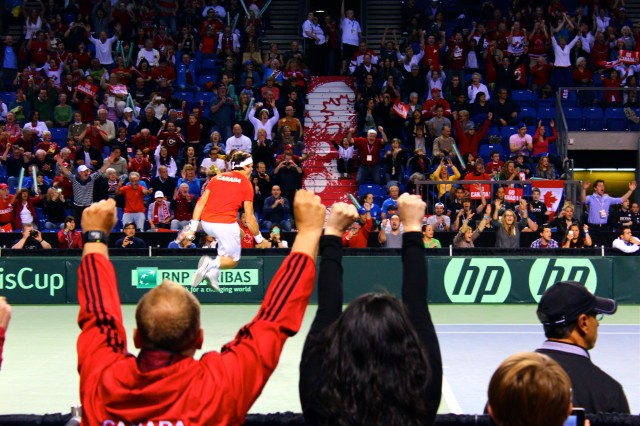 Raonic burst into emotion as he clinched the final break, taking the match 6-4, 6-4, 3-6, 7-5, and the crowd filling the stands all around him answered in kind. With his roar still ringing loud and long, his fellow Miele Canadian Team members rushed out onto the court, with champagne in tow, to celebrate history having been made. When asked why he ran away from the uncorked bottle Raonic joking answered, “I don’t drink!”

Canada, who was playing in the Davis Cup quarterfinals for the first time ever, following a 3-2 first-round victory over No. 1-ranked Spain in February, now advances to the semifinal. Canada will now take on 2010 Davis Cup champion Serbia in the semifinals. The Serbians defeated the United States 3-1 this same weekend in Boise, Idaho, where world No. 1 Novak Djokovic secured the tie with a win over Sam Querrey in the fourth rubber. The tie will take place September 13-15 in Serbia, with more details following later this month.

“I’ve been trying to pinch myself since match point,” said Miele Canadian Davis Cup team captain Martin Laurendeau. “I can’t even remember match point, the ball went into the net and then I blacked out. Three years ago, Milos saved match points against a guy from Dominican Republic in Toronto, and now we’re in the final four. There are a lot of countries in this competition that are hungry, and we’re down to four so it’s a great honour.”