Saturday, April 6, 2013, the second day of the Davis Cup by BNP Paribas quarterfinals, brought about chances for redemption. Canada’s Daniel Nestor and Vasek Pospisil would aim to redeem themselves for the doubles loss during the first round against Spain’s Granollers and Lopez. Pospisil, coming off a loss on Friday against Italy’s Andreas Seppi, would need to mentally overcome that loss and try to give Canada the edge going into Sunday’s final two rubbers.

Italy would not be without blemish however, as Fabio Fognini had suffered a loss against World No. 16 Milos Raonic the day before as well. The Italian, though previously not scheduled to play the doubles rubber, was nominated just prior to the match ahead of his countryman Paolo Lorenzi, to team with Daniele Bracciali. 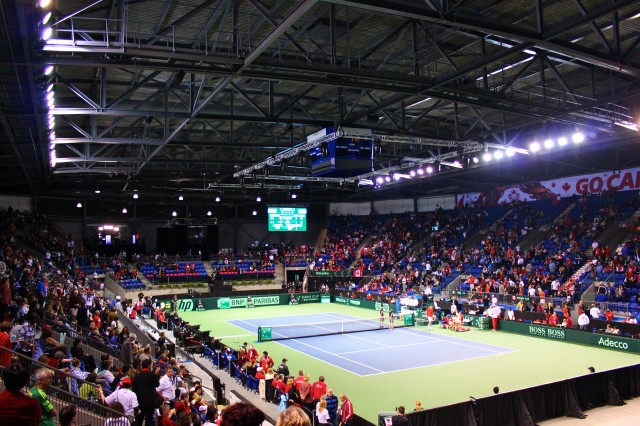 The Canadian pair would dominate the first two sets 6-3 and 6-4 respectively, but showings signs very reminiscent of the Pospisil/Seppi match from Friday, Canada would drop the third and fourth sets, each 3-6.

With a boisterous crowd around them, emulating the famous Vancouver Whitecaps’ Southsiders, whether that fits with the sport of tennis or not, both teams walked out onto the court for the fifth and deciding set. Italy jumped to an early lead, but Nestor/Pospisil answered right back, evening the score at one game-a-piece. Italy would win a game, Canada would answer. In a spell of repeated déjà vu, reaching games 10, 11, and even 12, Italy quickly took the advantage each time, and Canada fought back hard to even it up.

Then, the decisive moment, four hours and 25 mins into the match, deep in the belly of 14th game, in the fifth set, Canada finally took the lead. Mere minutes later, the beautiful symphony of Nestor’s slices, combined with Pospisil’s determination to not let another match slip him by, came together to finally silence Fognini/Bracciali. Canada’s Daniel Nestor and Vasek Pospisil defeated Italy’s Fabio Fognini and Daniele Bracciali 6-3, 6-4, 3-6, 3-6, and a thunderous 15-13! 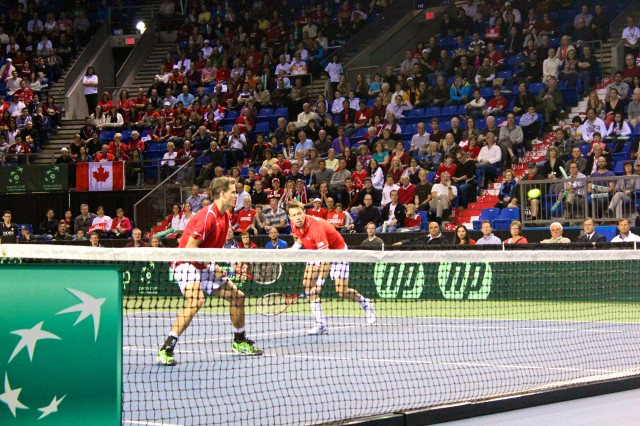 “After the match yesterday, losing in five sets and being up two sets to love, there’s no way I was going to let that happen today, in the sense where I was going to do everything in my control to literally fight for every single point in the fifth set,” said Pospisil of digging deep. “And I made a couple adjustments on my return of serve which paid off and I started returning really well.”

Nestor continued, “By the end you’re just playing, you’re not thinking, you’re trying not to get nervous, and you’re almost too tired to get nervous, and whatever happens happens, that kind of feeling. There’s a lot of times during the fifth set especially when you can get frustrated about missed opportunities and credit to both of us for staying positive, we never got negative one time no matter what the situation was, even in the third set and that was a missed opportunity. Vasek stepped up his level in the fifth, he won the match because I had a lot of break points that I didn’t connect on at all and Vasek made his shots and that was the difference.” 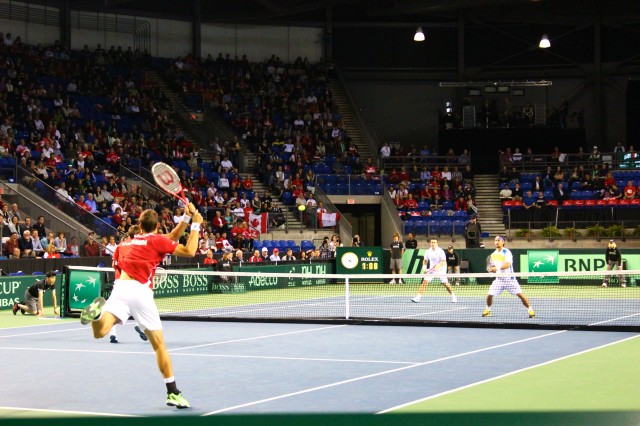 Nestor, who had been nursing an injury to his right calf that he suffered last month in Miami, elaborated on his condition saying, “I had felt a pop in Miami, so I didn’t know what my status would be. There was no tear which was good news from our medical staff, but there is always a chance you can re-aggregate it. Yesterday I asked Martin that considering my injury, or even without my injury, if Milos wanted to play, him and Vasek might be the better team. But then we wanted Milos at 100% for Sunday, so that didn’t make any sense. So I figured that playing at 80%, on a fast court, would be good enough. I was hoping it would be good enough.

On numerous occasions the Italian players, captain, and team were up in arms, complaining about the enthusiastic crowd in attendance and the disturbances it caused to their game. When asked, Nestor defended the fans saying, “I don’t think [their complaint] is fair consider what we’ve been through in South America and different places in the world. Our fans are getting this treatment because maybe they crossed the line a little bit here and there but they’re fans, and they’re speaking their voice, and it’s not during play. If you can’t deal with someone criticizing you or this and that, and making fun of you, then you shouldn’t be an athlete. It goes on in a lot of sports, and we shouldn’t be punished as much as we have been this weekend for a few things that happen here and there. Its part of the Davis Cup, and part of what makes it special, and I hope those fans are back tomorrow doing the same thing.”

Canada now has the 2-1 lead in the quarterfinals heading into Sunday’s two singles rubbers, which see Canada’s Milos Raonic taking on Andreas Seppi, and Vasek Pospisil knocking on redemption’s door once more against Fabio Fognini. If Raonic defeats Seppi, Canada will have a 3 point total in the Davis Cup by BNP Paribas quarterfinals, and will move on to the semis. The final match would not need to be played.

The matches will begin at 2pm PT, and will be broadcast on Sportsnet and TVA Sports. For the full TV schedule, please click here.