Pospisil falters, but Raonic evens it up.

Following a historic victory over Spain in the first round, Canada makes it first appearance at the Davis Cup by BNP Paribas Quarterfinals this weekend, April 5 to 7, 2013. The Doug Mitchell Thunderbird Sports Complex at the University of British Columbia once again plays host to the tie, which sees the Miele Canadian Davis Cup Team take on an Italian squad that boasted the same win-to-loss ratio in the first round.

The first singles rubber of Friday April 5, 2013 saw Canada’s Vasek Pospisil taking on Italy’s Andreas Seppi. Going into these quarterfinals, both had previously played and beaten each other in competition. With the boisterous Canadian fans backing him, Pospisil quickly took the first two hard fought sets 7-6 and 6-4. Even though the majority of the judging challenges throughout the match went in Pospisil’s favour, Seppi, holding advantage at set point in the third set, would win that particular challenge and the set 6-4, followed by the fourth, 6-3. Seppi, the three-time ATP World Tour titlist. would embrace this momentum to take the fifth and final set, 6-3. His victory would put Italy comfortably up 1-0 going into a weekend, with much more tennis still left to be played. Pospisil had 20 aces in his five set losing effort.

“In the third set he stepped up for sure,” Pospisil said of the definitive shift in the match. “Right from the first game, he played great, I couldn’t really do much. He put more first serves in the beginning, he played very aggressive, more aggressive than the last time I played him and the first two sets. 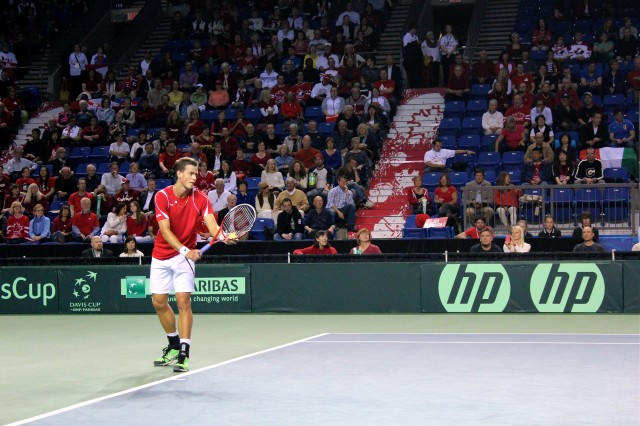 A mere 20 minutes later, World No. 16 Milos Raonic took on Italian Fabio Fognini in the second singles rubber of the day. After dominating the first set 6-4, Raonic fought through a long, but decisive tie breaker to win the second set, 7-6. After parlaying back and forth between advantage and deuce in the third and deciding set, Roanic claimed a victorious 7-5. The Canadian number one had 25 aces fly past Fognini in his two hour long match for the win. 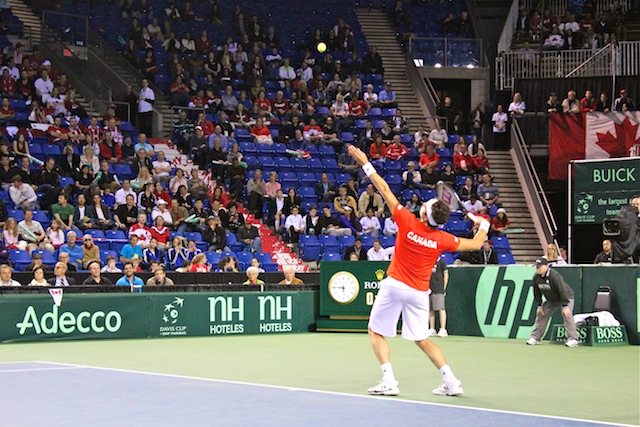 “I’m fortunate enough here at UBC to [get the] win, and I probably showed it more here than I normally do in other matches,” Milos said regarding his jovial display of emotion at the end of the match. “We gotta keep fighting. We gotta stick to our identity. And keep doing what we’re doing.”

This win gives him 4-0 straight victories at the very quick court at UBC, which when your clocking serves at 221 km/h, can be devastating  for his competitors. “My serve is something I spend a lot of time on, and I’m proud of the respect it gets,” He added. “I think I’m getting better in other aspects of the game. I think I stepped up and was able to break his serve at critical moments. My serve gets the attention, which means I’m putting a lot of pressure not only with my service games but also his service games, him knowing that if I get ahead in the set I can close it.” 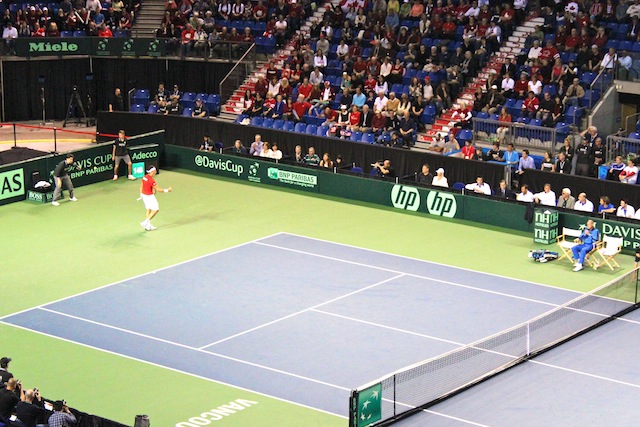 The Davis Cup by BNP Paribas remains the largest annual international team competition in sport. A total of 130 nations have entered the competition in 2013, with over 500 players taking part in over 80 ties held in roughly 60 countries.

Along side the matches between Canada and Italy this weekend, three other World Group quarterfinal ties are taking place: USA vs Serbia, Argentina vs France, and Kazakhstan vs Czech Republic. If Canada is successful in these quarterfinals, they would play Serbia or USA away.

Stay tuned to Vancity Buzz for daily recaps and on-site analysis of the matches and all the Davis Cup by BNP Paribas news.