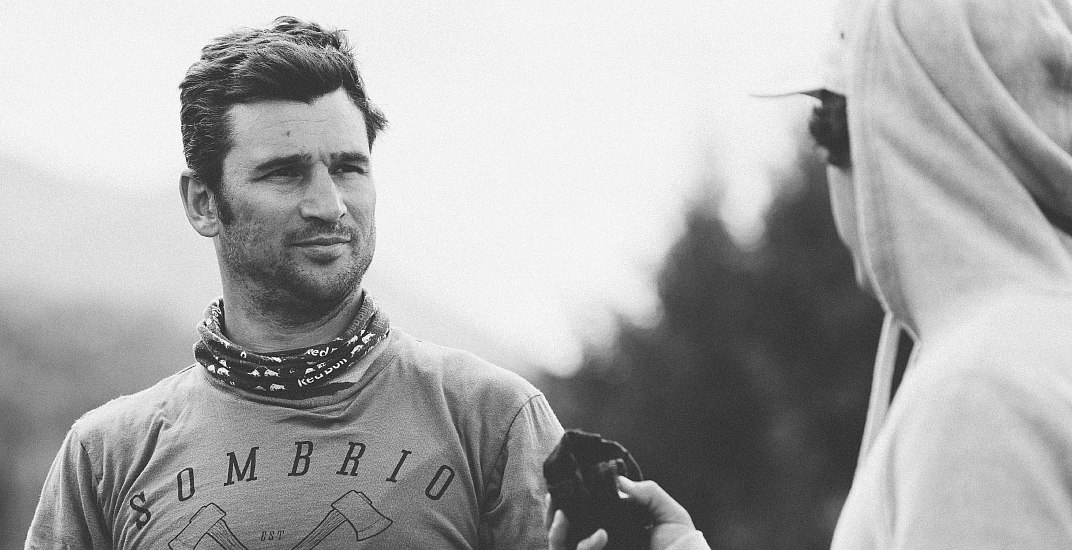 Fear. You either thrive under it or you avoid it at all costs.

Most people choose the safer option.

But for others, fear keeps them alive, allowing them to do things they had never imagined.

Thirty-five-year-old freeride mountain biking pro Darren Berrecloth, also known as ‘The Claw,’ embodies what it means to look fear in the face and live life as an adrenaline rush junkie. It’s this attitude that scored him his career of travelling all over the world to compete.

And it’s an attitude that he’s had from day one.

“I kept getting fired from my work placements because I wanted to leave early for bike competitions. At the very first Whistler jump joyride contest I got called in from my counsellor at BCIT who pinned me up against the wall, basically telling me to ‘forget about this childish biking thing’.”

“This was a very clear moment in my life when I thought ‘peace out.’ I walked out the door and never turned back.'” 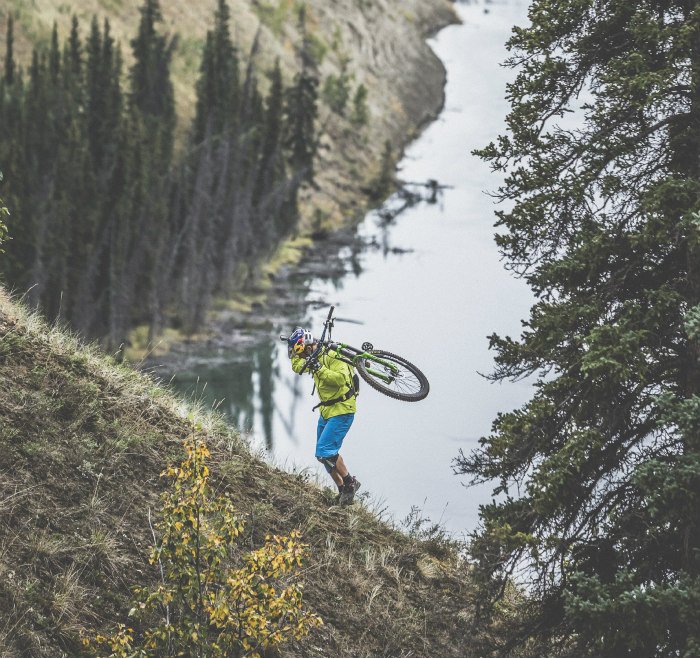 Daily Hive sat down with 35-year-old freeride mountain biking expert Darren Berrecloth to interview him regarding his role in the documentary Riding the Tatshenshini, a Red Bull TV and Freeride Entertainment documentary. In it, the viewer gets to see him navigate dangerous (and breathtaking) terrain within the Yukon, BC, and Alaska.

Berrecloth has 17 years of freeride mountain biking experience. He rides extreme style, down some of the biggest mountains imaginable, handling anything that mother nature offers.

But landing what’s arguably one of the coolest careers you can think of wasn’t as easy as you might think for Berrecloth. He was passionate about mountain biking from a young age, but he couldn’t afford a mountain bike until he was 20. 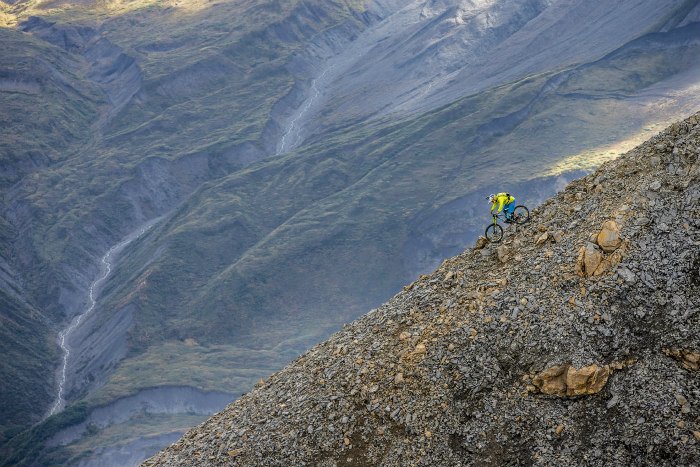 Filming Riding the Tatshenshini was especially significant for the pro mountain biker as he explored the theme of global warming, seeing the environment through a unique lens as he plummeted down the mountains’ precarious soil.

“This project has a bit of an environmental angle to it because we’re shedding light on the glaciers and global warming. We do talk about that in great detail and we went to an area where a photo of a glacier was taken in the early 20th century and compared it to today. It’s about eight kilometres away from you now.”

The documentary saw Berrecloth team up with ‘The Godfather’ of freeriding Wade Simmons (CAN), slopestyle pioneer Tyler McCaul (USA,) and rookie Carson Storch (USA) for an unforgettable two-week journey through Canada’s northern wilderness, battling the elements on a raft in search of the country’s most impressive, untapped terrain. 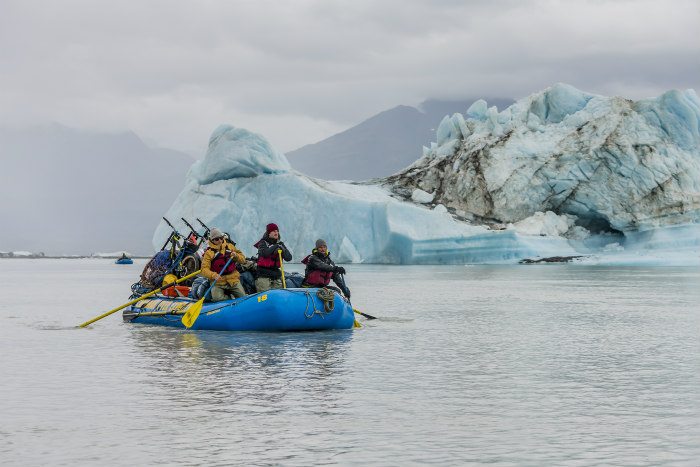 “The riding was definitely a lot more rocky than we expected, even for the Rockies. We were searching for some dirt because that’s what we wanted but at the same time we had to learn how to ride the rocky stuff than what we had previously known.”

But surprisingly, the riding wasn’t the scariest thing that the group encountered as they were filming in an area with the highest density of grizzly bears in North America.

“We were walking up a slope checking out some terrain and I thought it was a bad idea. There was a big grizzly bear 150 yards above us, just standing up on its hind legs. We backed down and all of a sudden two cubs popped up, not much smaller than the mom. I said oh my god we need to get out of here. Fortunately, the bear went the other way since we weren’t threatening its livelihood.”

If you watch Riding the Tatshenshini for yourself then you’ll get to see the group encounter spectacular glaciers and unexpectedly rocky terrain along their journey. And that will be easy for you to do as the documentary is available to watch on Red Bull TV as of today. You can also watch it in BC and Alberta for free, in 4K and HD, on Channel 707 if you have Telus Optik TV. French viewers can watch the documentary by tuning in to TVA Sports 2 at 8 pm EST on October 26.

“Too many people these days are intertwined with social media and digital blah. I’m involved in it because of my job but I would much rather be out in the mountains enjoying them,” Berrecloth concluded. 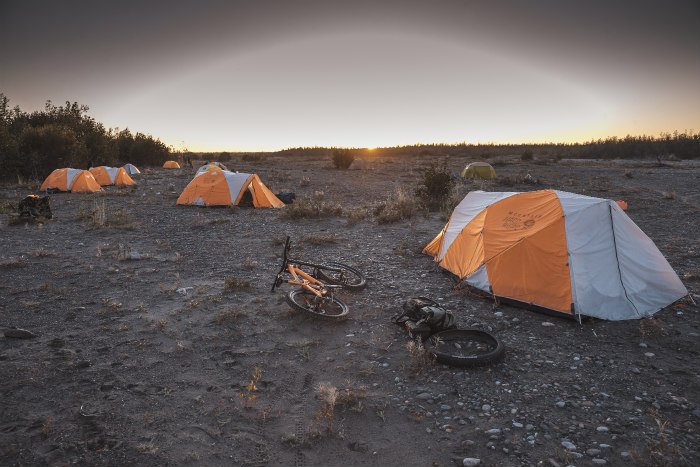 Perhaps what’s most notable about this film is the viewer’s ability to see Berrecloth explore Canada’s terrain in a way that nobody else has. It speaks to the idea that no matter what it is that you do, there’s always so much more to discover. Berrecloth’s attitude could be the catalyst for change in your own life, a reminder that when someone tells you to not do something, to say ‘screw that’ and do it anyway.