With the hockey world still reeling from the shock of the ballot stuffing on behalf of John Scott actually working, today delivered yet another surprise: Daniel Sedin has been separated from Henrik.

Yes, that’s right, today the league announced the full NHL All-Star game rosters, and Daniel Sedin made the cut, while Henrik Sedin did not:

Here’s the All-Star rosters from the press release. pic.twitter.com/24o9C8lVZt

This isn’t the first time this has happened, of course. Back in 2008, Henrik Sedin went to the All-Star game all by himself (who can forget the throne pictures?) and put up two assists. The gauntlet has been thrown down, can Daniel Sedin out-pace his brother in their eternal competition to prove which Twin is slightly better? Daniel still hasn’t gotten over that time Henrik beat him at Canasta.

With Henrik getting the majority of the spotlight due to his position as Canucks Captain, now is the time for Daniel Sedin to shine on his own. This year Daniel Sedin has shown a rougher side to his game, a side that says he no longer cares what you think. Last game he took a puck to the mouth and lost several teeth, but he didn’t care. The bleeding only made him play harder, and he scored a goal later in that same game. Nobody makes Daniel Sedin bleed his own blood! 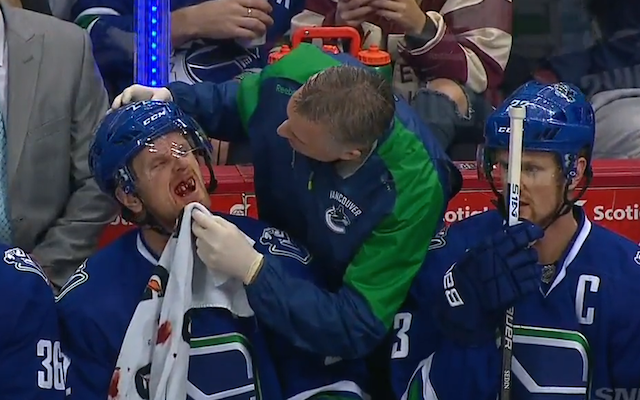 At this point it’s safe to assume Daniel probably ripped out the rest of his teeth so this would never be a problem in the future should he get hit by a puck again.

The Canucks goalie charity is also paying dividends, as their practice of giving away All-Star goalies to beleaguered teams is paying off with former Canucks Roberto Luongo and Cory Schneider making the roster as well.

Overall, the Canucks are probably wishing both Sedins had been passed up for the All-Star game. With the twins doing most of the heavy lifting on offense this year, and with Henrik dealing with a nagging injury, a vacation in the Bahamas would have probably been preferable to extra ice time. Who will pass the mimosas to Henrik now?

Still, it should be fun to watch Daniel Sedin attempt to conquer 3-on-3 hockey, something his team has struggled with this year. Playing with John Scott might not be the most ideal situation to try and win in a 3-on-3 situation, but maybe this year we’ll see the first fight at a modern NHL All-Star game.

Daniel has just been itching to get into a scrap, you can tell.