Thierry Smits’ ReVoLt was a simple solo of incredible athleticism. Performed by Australian dancer Nicola Leahey, it laid bare the intensity of being a woman under societal oppression. Leahey’s explosive precision and emotional dexterity brought ReVoLt to life Smits’ choreographic fight for freedom.

Watching a woman grip at her own body with an emotional struggle that matches her physical struggle is not easy. The all-too-real oppression of the female body was bridged by the universal fight for freedom as the audience witnessed Leahey twist and pull herself into compromising positions. Her performance and Smits’ choreography spoke to the inescapable duality of the internal struggles of confidence and desires against the external forces of expectations and societal norms.

Smits is known to use the stage as a place for political discourse, and ReVoLt was no different. ReVoLt is a meditation on the historical chains and pedestals women have found themselves in and on; Leahey continually begged for freedom from self-imposed restrictions as she held herself and moved through a looping choreography of tender violence. Leahey’s persistence in continually meeting her edge of endurance was not a work of submission so much as it was a fight for the universal desire for self-determination.

ReVoLt was simple, stripped down. Leahey danced in a square of light, wearing a long camouflage t-shirt, and was accompanied by a persistent rhythm of unassuming beats and electronic sounds. This minimalism of repetitive movements with the simple costuming, lighting, and sound allowed the audience to rely on the imagination for explanation and meaning. Yet, the content was far from simple. Perhaps too much was left for the audience to interpret as the program notes revealed more than the choreography did.

Nonetheless, Leahey’s performative prowess left the audience wanting more and more. Her clarity and commitment was never pushed to the limit; but her interpretive and physical talent transcended the choreographic simplicity as her long blonde hair emphasized the impact of each movement. Leahey’s engaging performance, coupled with the modest and repetitive movement score, seemed to echo the insidious ability of political violence to surpass physical violence. 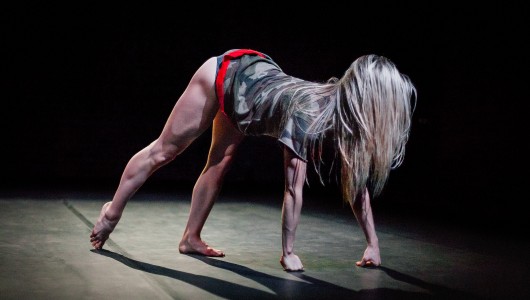 It’s interesting to think of ReVoLt next to other dance works presented in the Dance Centre’s 2015/16 season. Back in November, Jan Martens’ The Dog Days Are Over brought audiences to their feet with the 70 minutes of jumping. The Dog Days Are Over maintained a continual process of revealing and overtime gave the audience more to understand about the development of Martens’ jumping dance. On the other hand, ReVoLt showed it all within the first 10 minutes.

The DNA or essence of ReVoLt, while physically beautiful and politically pertinent, sustained its presence in the same few gestural movements for the entirety of the performance. The repetitive nature of the work made it slightly frustrating and uncomfortable to sit in the theatre seat for so long, however the minimal development of the choreography can speak to the reality of the oppression of the female body.

The oppression of women has been an unavoidable struggle for generations. There has been great and undeniable progress for women’s rights since the 1950’s let alone the 18th century, yet time has erased nothing and oppression is as present as ever. The form of oppression may change, but it is still felt on a global scale. ReVoLt, with the barely changing movements brought a needed discomfort. Perhaps the audience was asking: why is Nicola still dancing, why has the choreography not ended? Yet, the question pouring out of this piece was: why are women still oppressed in so many differing forms?

ReVoLt was ultimately representative and not explorative. It hit hard because seeing a woman wrap her own arm around her neck in a way that makes it look like someone else’s arm, is frighteningly relatable. Fighting the forces that exist both inside and out is exhausting; Leahey and Smits showed that equality and freedom are not to be met with violence, but with persistence and endurance.

ReVoLt ran May 5-7 at the Scotiabank Dance Centre. No shows remaining. Check out more information on Company Thor and Thierry Smits here.