Ten years after their separation, Holy Body Tattoo remounted their 2005 work, monumental, with the live accompaniment of the celebrated Canadian band Godspeed You! Black Emperor and multi-media projections by Jenny Holzer. Thankfully, the Queen Elizabeth Theatre had capacity for nearly 3000 audience members, as both Holy Body Tattoo and Godspeed You! Black Emperor have immeasurable support here in Vancouver.

Once the horde of people made their way into the theatre, one could see young contemporary dance connoisseurs dressed to the nines sitting alongside people in their mid-forties sporting t-shirts emblazoned with profanity; the audience was buzzing in the excitement. As the music began and the patrons hushed, the curtains rose to unveil nine bodies on pedestals standing in deformed, yet natural positions. Slowly, one of the dancers, Jamie Wright, began to move through a series of abrupt gestures that showed both a struggle and an ease in standing on the pedestal. Gradually the other eight dancers joined her in an astounding choreography of amplified gestures and positions which moved in and out of synchronicity.

The punishing movements of the dancers – continuous drops to the knees on small pedestals in-time to the music is not an easy feat – met the overpowering, yet satisfying, score of Godspeed You! Black Emperor. The dancers and the music would crescendo in perfect harmony. Building and deconstructing in similar but distinct ways, the music and choreography built narrative of universal disconnection and interdependency.

As monumental progressed over its grueling 75 minutes, the dancers made their way off and on their pedestals through moments of aggression, consolation, support, and conflict. These viscerally extreme moments when the dancer’s hair and sweat would whip together with the music, emphasized the physical pounding of the sound wall created by Godspeed You! Black Emperor.

Despite the sensory overload provided by the extraordinary dancers and the precise musicians, monumental spoke to the madness, speed, generally self-serving, and fragile reality of contemporary life. As soon as the lights came up on the dancers and the audience saw them on their white pedestals, there was nothing else to expect but for them to fall – what goes up must come down. The rigidity of the pedestals and the way they confined the dancers’ movements reflected the way that we can become slaves to our work, feel limited by our jobs, and become frightened by our future. 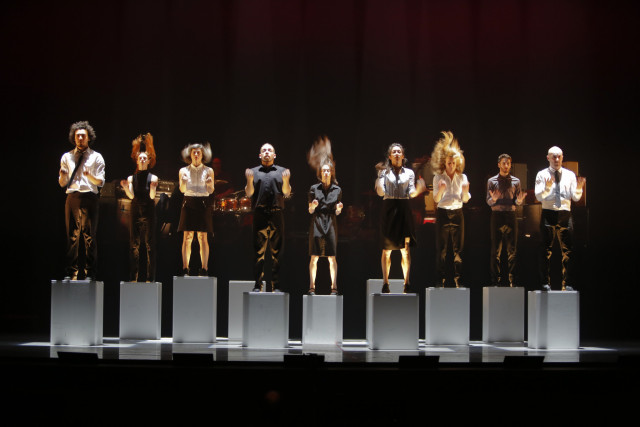 The interactions between dancers, sometimes violent and sometimes gentle, reflected the way many of us go through our daily lives in hope of personal gain at the expense of others. Regardless of our massive technological progress, we still need human connections; our need for intimacy and our perpetual advancements seem at odds with one another as we destroy both ourselves and the planet we live on. Despite the theatrical frenzy of individual dancers losing their identity within the group, and the music growing to nearly unbearable volumes, the hope of peace on a social and personal level were echoed as the final image of the nine dancers comforting themselves at the front of the stage dissipated.

Watching the nine dancers continually challenge their bodies while feeling and listening to the surrounding music for 75 minutes was exhausting. However, without such a length, the dancers would never have reached the rawness and collapse that they did. Witnessing the choreographic demands of monumental was satisfying yet left the audience with harrowing images of destruction and a recognition of our potentially discordant lifestyles.

After a decade since its debut, monumental still unleashes a message of urgency and sincerity.