One of the many wonderful things about contemporary dance is its ability to poignantly ask the audience to participate in moments of social and personal criticism. Part of the biannual event Dance in Vancouver, a slow awkward and The Righteous Floater were two pieces that opened a reflective door into what it is to be human; they gave a delicious taste of the dynamic and ever evolving contemporary dance scene in the city.

This event happens every two years and consistently connects the diverse contemporary dance that is being made in Vancouver. This year a multitude of exciting artists from the city presented works in a variety of platforms from proscenium arch theatres, to a hotel, to Vancouver at large. The double billed show with The Biting School and dumb instrument Dance was a perfect example of the rich choreographic voices alive in the contemporary dance community.

Created and performed by Aryo and Arash Khakpour, The Righteous Floater spoke to the complex relationship of brotherhood through physical and visceral moments of connection and separation. The intensely loud voice that began the piece spoke to the unceded territories the work was created and performed which immediately set the tone for the personal and political experience that the audience would watch transpire in The Righteous Floater.

Knowing that the performers were brothers, every interaction between them was seen through a lens of rivalry, love, hate, care, and destruction. The brotherhood performed on stage was amplified to create a mythological and dreamlike world. It was both authentic and full of a childish gravity. Images of conflicting battles and protection were intensely constructed in a way that gave the audience time to understand what was being shown yet, just as life itself, the images would swiftly melt into the construction of a new image. As they lit candles to mark time and different ideas or chapters, a red thread of sublime comedy provided unity and cohesion. The pacing was quick enough to keep the audience engaged and still kept us on our toes, scared yet excited to see what trauma would unravel next.

Arash’s strong and grounded body moved with imperceptible speed emphasizing the intensity with which every physical choice was made. In the moments his body released and Aryo manipulated his form, the childish games being played gained a sense of reality and spoke to the insidious side of any relationship, be it between brothers or cultures. The opposing lankiness of Aryo’s shape was exciting to watch as he filled the theatre with passion, focus and a unique generosity. Ending with an image that endured in the mind of the Khakpour’s signature dark and dry humour, their childlike games were again emphasized through their adult forms and their exceedingly engaging commitment in their performances. 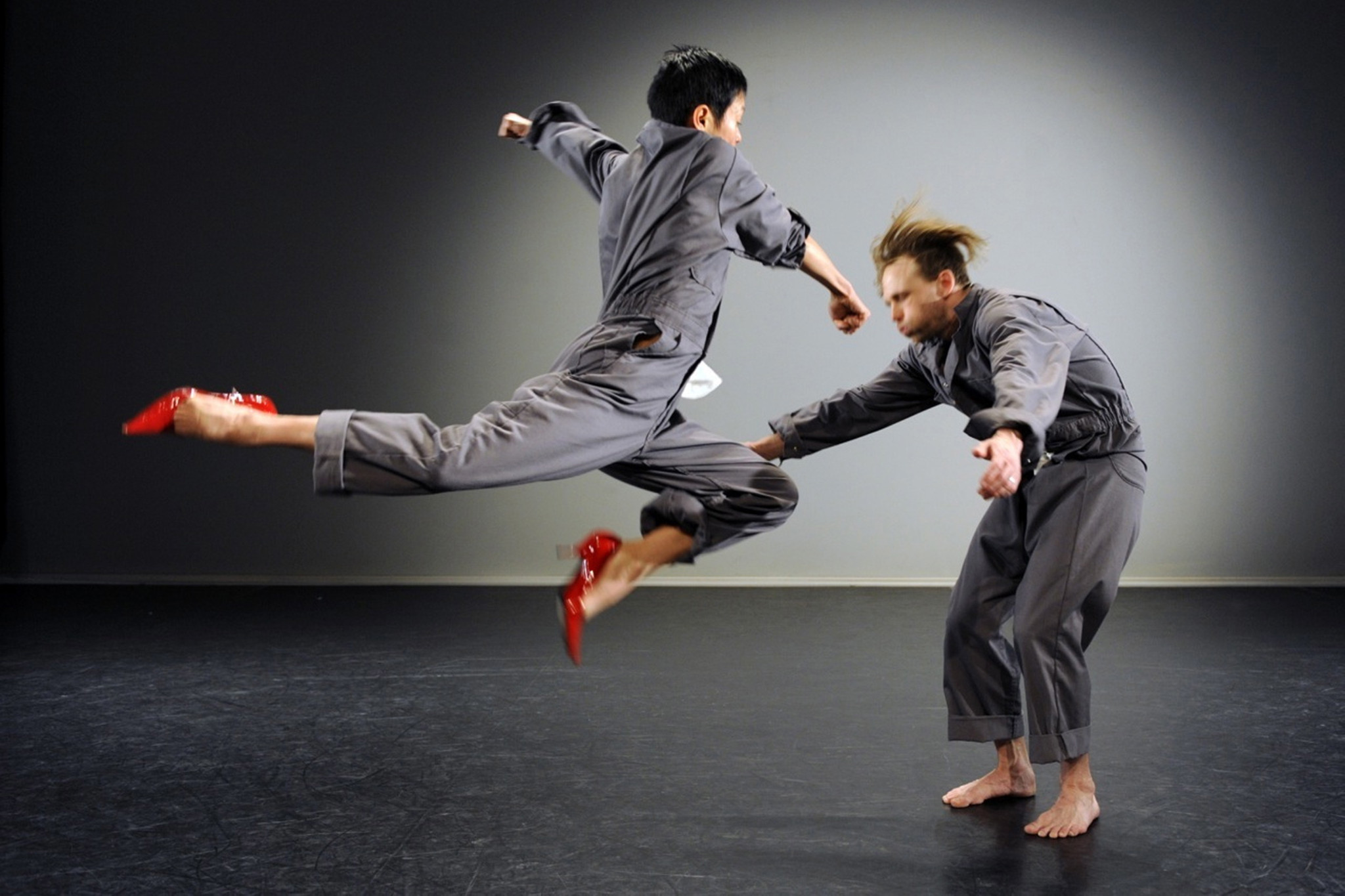 A slow awkward, created and performed by Ziyian Kwan in collaboration with James Gnam, was a simple expression of the complex and inherent feminine and masculine duality that exists in us all. Their bodies oozed intelligence in the intricate partnering that looked simultaneously impossible and mundane. The two bodies seemed to collide yet melt into one another; Kwan and Gnam in their distinctly feminine and masculine bodies blurred the lines between gender and instead defined the cooperation of yin and yang.

Dance in Vancouver claims to give the public the best of the best and this year, the did just that. Both dumb instrument Dance and The Biting School promise an exciting future for contemporary dance, the arts in general, and for the Dance in Vancouver events yet to come.

The Righteous Floater and a slow awkward ran as part of Dance in Vancouver November 18-22 at the Scotiabank Dance Centre. No shows remaining. Check out more information on The Biting School here and dumb instrument dance here.