Ballet BC has some of the best ballet dancers in the city. Every performer in their recent Program 3 showed unmatchable athleticism as they performed I and I Am You by Jorma Elo, 16+ a Room by Emily Molnar, and Bill by Sharon Eyal. These three huge works ended the company’s 30th season by pushing the physical limits of the dancers and engaging the audience with a broad conceptual range.

The three works complimented one another as the audience experienced a transition from the more traditional choreography of Finnish-born Jorma Elo, to the boundary pushing and raw movement of Israel’s Sharon Eyal. Elo’s I and I Am You was a more position based work where the dancers were sculpture-like in their form and used a soft swiftness in their movement.

Set to Bach, this work was reminiscent of the centuries of classical ballet where dancers moving in unison was equally offset by solos and duets. The piece began with five circular, orange lights, gently glowing at the audience. The dancers never seemed to acknowledge these lights, or the lights’ resemblance to eyes staring at the audience, yet the performers moved with glee and sensitivity as they showed off their strong technique and enviable talent. 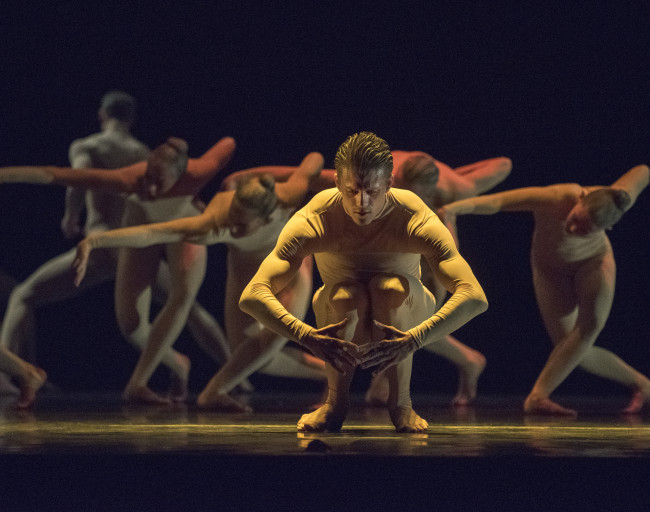 Scott Fowler and Artists of Ballet BC cred Chris Randle

16+ a Room began with a dancer holding a sign that read “this is a beginning.” Seemingly counter-intuitive, this sign provided structure as the dancers moved with an unchanging water-like quality. This sign perhaps was a tribute to Rene Magritte’s “Ceci n’est pas une pipe” or “The Treachery of Images” in asking the audience to quesiton the perception of time and narrative in dance-based art. “This is a beginning” became both true and untrue as it was shown over and over again; it became a mark for the audience to understand the infinite possibilities of interpretation one can find in a dance.

Molnar’s choreography asked the dancers to find a thick and viscous tone in the body while still working to find precision and speed. It was incredible to see the dancers succeed at such an impossible task. However, it was slightly unsettling to see the unequal amount of stage time given to the men over the women, especially as the mens’ choreography was more exciting than the women with the varied qualitative dynamics – ranging from vibrating to exploding to suspending time – and their loud performative presence.

Nonetheless, 16+ a Room was an expressive exploration of space; the form based choreography which focused on the shape and architecture of the movement rather than the meaning, allowed for harmony between the dancers. Such harmony starkly opposed the homogenization, and loss of identity that occurred in Eyal’s piece, Bill. 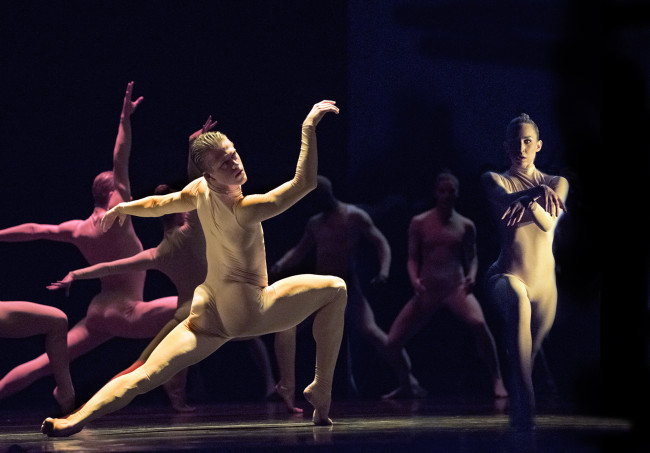 Bill was an intimate piece that barely filled the humongous Queen Elizabeth Theatre. The internal states that translated into the movement onstage was hard to pick up as the size of the theatre diffused the visceral experiences of the dancers. Bill followed Eyal’s presentation of the dancing body as something that simultaneously thinks and moves. The progression of the piece felt trance-like as the performers became genderless bodies, moving together in mathematical yet organic sequences. There was this magical moment in Bill when the layers of the music was emphasized by the layers of dancers as pulsating torsos and limbs transformed the stage into a garden of life and death.

If you saw Eyal’s company L.E.V in Dance House’s 2014/15 season, you can imagine the provocative and writhing choreography of Bill along with the dancers clad in skin-tight unitards that covered the body from wrist to heel, yet not masking any inch of the performers’ bodies.

The brilliant lighting of James Proudfoot added yet another level of beauty to Program 3 as his design both flattered the dancers’ movements and added a necessary drama to the exquisite athleticism of each piece. Specifically in 16+ a Room the floor would appear white, and suddenly drop out to be a black and endless mass that consumed the dancers. Ultimately, Program 3 brought the satisfaction of seeing professional dancers do what they love in the endless quest to communicate the choreographer’s and composer’s vision. It was with immense virtuosity and rigour that the performers were able to engage the audience for an entire evening of dancing.

Program 3 ran May 12-14 at the Queen Elizabeth Theatre. No shows remaining. Check out more information on Ballet BC and information of their upcoming season here.