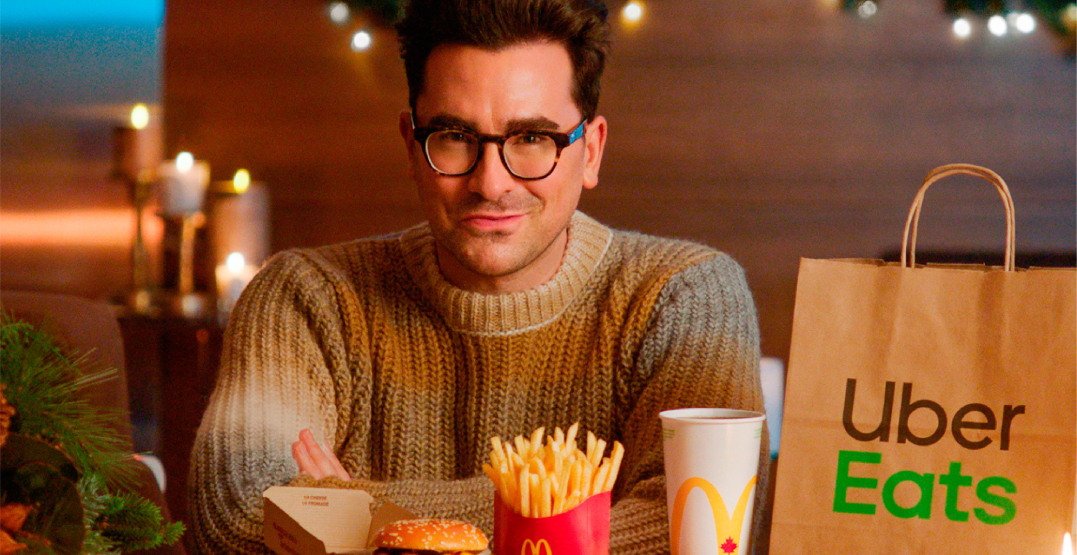 It’s the match made in heaven we didn’t know we needed: Dan Levy and Uber Eats. Yes, you read that right: the prodigal son of Schitt’s Creek (and defacto Canadian royalty) has teamed up with the mecca of food delivery — and all for an amazing cause.

This Christmas, Uber Eats and Levy are helping families in need by donating $50,000 to Ronald McDonald House Charities Canada. Did we mention you could also win $5,000? More on that later.

If you haven’t already binged Schitt’s Creek — the little CBC show that just earned Levy three Emmy Awards — we’re here to let you know you’re missing out. Big time. Levy’s come a long way from his days as the former host of MTV Canada’s The Hills After Show, joining his real-life dad, Eugene Levy, on-screen as a member of the hilariously flawed Rose family.

While we like to imagine his holidays are something like we see in Schitt’s Creek, Levy set the record straight in the hilarious “Reasons for the Season” ad with Uber Eats. It turns out, the Toronto native gets stuck shovelling snow and untangling those annoying Christmas lights… just like us. Oh, and he, too, has to listen to his rambling great aunt’s political views. Oy vey.

The extra good news here is the next time you’re craving a Big Mac, an extra side of large fries, that Oreo McFlurry, or an Egg McMuffin (or all of the above) between now and December 14, you could win big. Uber Eats and McDonald’s Canada are giving Canadians a chance to brighten up their holidays and win $5,000 on every McDelivery order over $25 (before taxes and fees).

And this isn’t one of those contests where there’s just one winner: there are 14 prizes in total. You’re entered for a chance to win when you use the promo code “Reasons” with your McDonald’s order of $25+ (before taxes and fees) on Uber Eats (conditions apply, see below).

There’s a little something extra with every order, too. McDelivery orders between now and December 7 will also be treated to two Junior Chicken sandwiches for free with an order of $25 or more of McDonald’s delivery, only on Uber Eats.

And for those with a sweet tooth, you’ll be treated to six complimentary McCafé Li’l Donuts from December 8 to 14. We don’t want to tell anyone want to do, but marking dates in your phone calendar (and/or setting an alert) is never a bad idea.

To get your McDelivery, order through the Uber Eats app. Happy holidays and remember: good friends tell friends about this sort of thing.

NO PURCHASE NECESSARY. A purchase will not increase your chances of winning. 14 prizes are available worth $5,000 each. A mathematical skill-testing question must be correctly answered to win. The odds of winning depend on the number of entries received. The contest begins at 6:00 AM EST on December 1, 2020, and ends at 11:59 PM EST on December 14, 2020. Full rules available at uber.com.