In part one, we looked at Roberto Luongo’s arrival in Vancouver and his first year with the team. Luongo had just finished his playoff run and had one of the best seasons a Vancouver goalie has ever recorded in this city. Though Luongo would continue to put up remarkably consistent numbers in his time in Vancouver, he would never approach the 47 wins he put up in his first season. Some might argue his playoff performances peaked in 2007, as his future playoff runs were marred with key losses in which he didn’t play particularly well. It was almost as if Luongo had set the bar too high in his first season.

That isn’t to say people stopped supporting Luongo immediately after the 2007 season ended. It was more of a case that 2007 was a year that not many people expected much out of the team. As the years went by, the expectations were raised, and Luongo no longer had the benefit of the doubt from the fans when it came to “just happy getting to the playoffs.”

As the team marched towards its 2011 Stanley Cup Finals destiny, those expectations went from “make the playoffs” to “how can this team NOT win a Cup??”. As a result of the fan bases’ intense desire to win, any bumps in the road were treated like the Cuban Missile crisis, with fans and media alike breaking down each game as if the teams survival depended upon it. A poor shift from Tanner Glass would have a thirty page thesis written about it the next day. 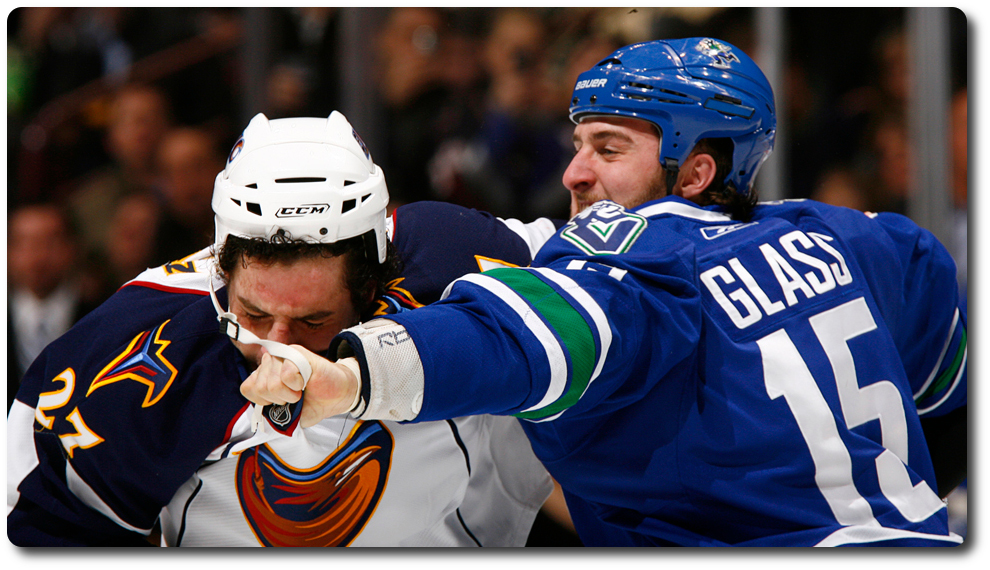 “The problem with the Canucks is the fact they let Tanner Glass jab with his left. If he would utilize his right hook more, the Canucks would win more games.” – Page 17 of GoCanucksGo19 thesis.

This is why anytime Luongo didn’t have a great game, or a season ended without a lengthy playoff run, people would question why, and many of those questions led straight to the goalie. After all, he is the last line of defense, so if something went wrong, surely he played a part in it.

One of the very first bumps in the road was when Luongo started coming down with his infamous “October slumps”. This probably played the biggest role in his inability to match his 47 wins from his first year with the team, as each season onward he would inexplicably play very poorly to start the year. As Daniel Wagner pointed out, aside from 2007, Luongo’s worst month in each season in Vancouver was October. It became a tradition to have plenty of beer on hand to help get you through the month of October as you waited for the good Luongo to show up. Theories for Luongo’s poor play in October ranged from “He’s letting his twin brother who isn’t very good at hockey play that month” to “Space Jam might have been a documentary about Luongo all along.” 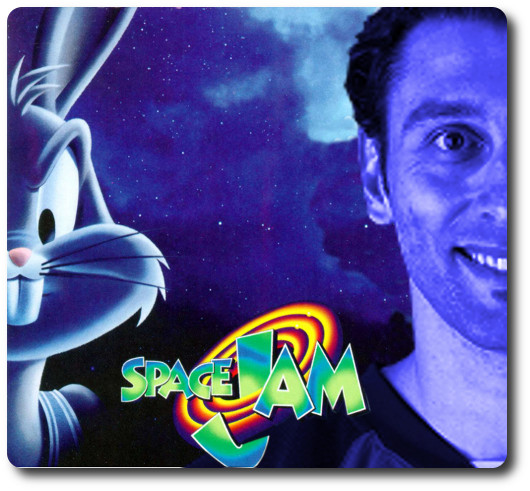 The second bump in the road came when the Canucks failed to make the playoffs in Luongo’s second season. Although he put up solid numbers and was voted the team’s MVP, Lu won only one of his last eight starts of the season. This would lead to the Canucks losing their grasp on a playoff spot down the stretch. Keep in mind this was a season which featured cameos from Jason Jaffray (Who Nonis said was a potential 40 goal scorer in the off-season), Brad Isbister, PP specialist extraordinaire Byron Ritchie, Ryan “Poor man’s Raymond” Shannon, and who could ever forget, the one, the only, Matt “I swear I used to play in the NHL” Pettinger. It was far from Luongo’s fault this team failed to make the playoffs, but the chinks in the armor of the mystique of Roberto Luongo, one that seemed impervious just the season before, were starting to show for some fans.

Of course it’s unreasonable to expect a player to maintain what Luongo did in his first season. Optics can be everything in sports, though, so when the playoff losses mounted these moments from Luongo’s past were what was brought to the forefront when evaluating his performance.

Regardless, as a result of their failure to make the playoffs, Dave Nonis was fired (where he quickly became absorbed back into the womb of Brian Burke in Anaheim) and Mike “Bold Moves” Gillis took over the team.

Despite how people judge the reign of Gillis, the team got better under his watch initially, culminating with the great run in 2011. The Canucks roster was bolstered with the additions of Mikael Samuelsson, Manny Malholtra, Christian Ehrhoff, Raffi Torres, Dan Hamhuis, Chris Higgins, and to a degree Mats “10 second shifts” Sundin. Ryan Kesler was coming into his own, slapping his stick on the ice demanding all of the passes, starting the rise of the elite second line center he was soon to become. The Sedins were introduced to the joy of favorable zone starts under Alain Vigneault and began putting up a couple of 100 point seasons between them. The Canucks had turned into a legitimate threat to win the Stanley Cup. 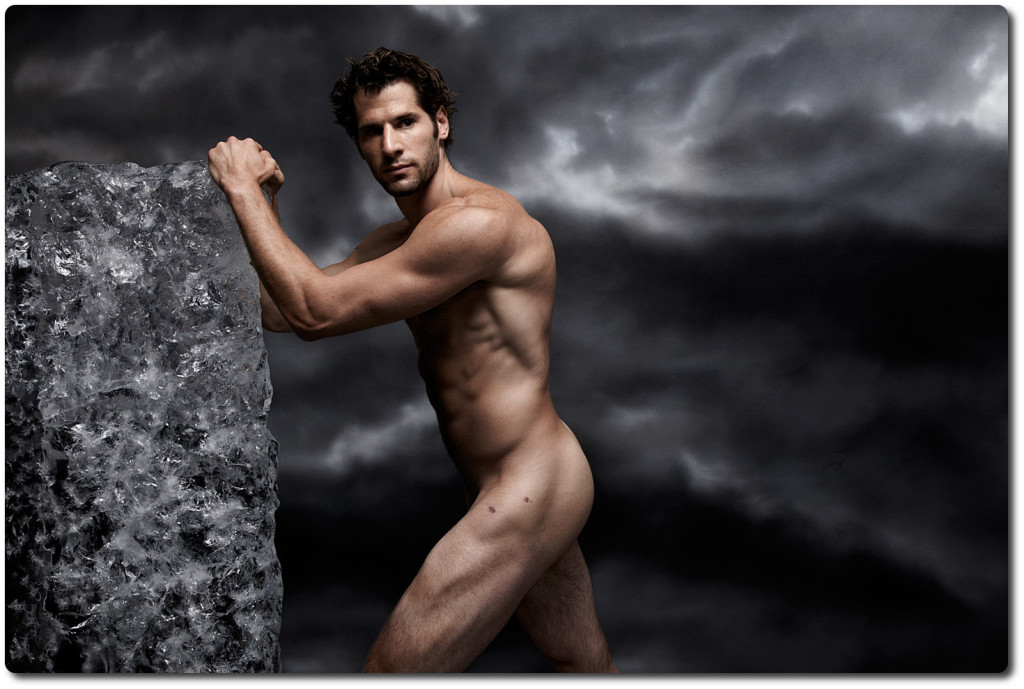 Of course, Presidents’ Trophies don’t hold much weigh in the hockey community, so Roberto Luongo’s regular season performances from 2009-2011 (33, 40, and 38 wins respectively, average of .920 save percentage) meant nothing if the team didn’t go far in the playoffs.

The 2009 playoffs got off to a great start, as the Canucks swept the St. Louis Blues in the first round. This was a wonderful moment for me, as I owned a Kyle Wellwood jersey, and was high fived for the first and only time for wearing it when Kyle scored a goal in the first round.

The second round match up against Chicago was a different story. Initially it seemed like the Canucks were going to get a stranglehold 3-1 lead on the series, leading game four 1-0 with around three minutes left to play. One bad Mitchell clearing attempt later (all of Vancouver screamed at their TVs at Mitchell for not using the open side to clear it), and the Hawks tied the game, later winning in overtime. They would take that momentum and never lose a game again in the series, taking it in six games. The sixth game is where things got bad for Luongo: 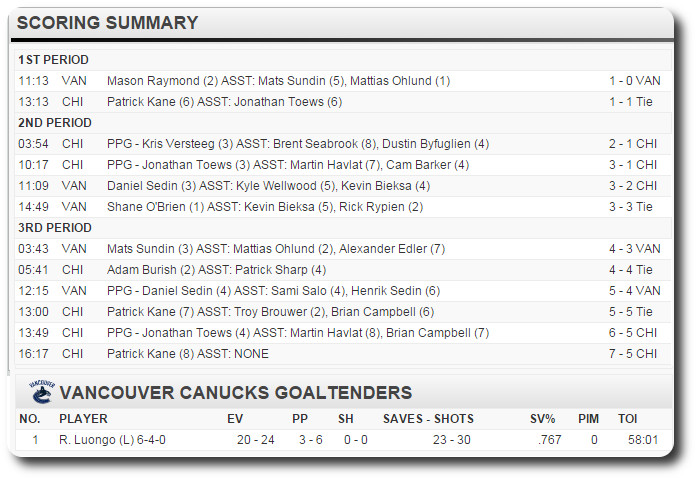 In a back and forth game, where it felt like the Canucks just needed one big save, they never managed to get it. Again, the team didn’t play well overall defensively, but Luongo’s performance, and that ugly ugly stats line, was the last memory of that season.

After another great regular season in 2009-10, the Canucks took out the LA Kings in the first round (Yes, there was a time when the Canucks could actually beat the Kings) with Luongo making several highlight reel saves, including an around the world save on Ryan Smyth:

Heading into Chicago, the Canucks look poised to get their revenge. Just like the year previously, however, the Canucks lost in six games. Once again Luongo had a couple of sub par games on the road, foreshadowing a dark future in the 2011 Finals. 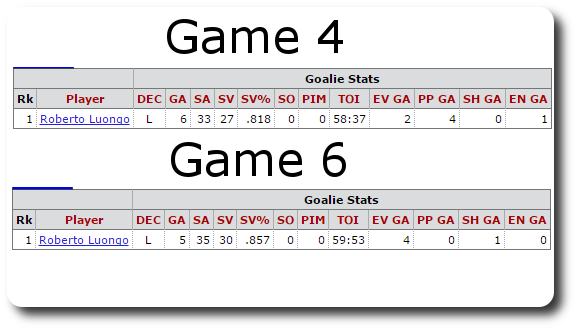 Chelsea Dagger was the musical equivalent of Mark Messier’s face in Vancouver, as people shuddered at the memories of the Chicago goal song playing after each home goal.

2010-11 of course, was perhaps the finest season the Canucks have ever had. Statistically they were dominant, and stylistically they were fun to watch. They roared into the NHL playoffs on the back of their first Presidents’ Trophy and came upon a familiar foe in the Chicago Blackhawks. The Canucks took a 3-0 lead in the series, before managing to barely escape with their lives in a seven game, overtime thriller. The series also marked the first playoff appearance of Cory Schneider, as he got the start in game six, before cramping up and being replaced by Luongo. Luongo would go on to lose the game in overtime.

Regardless, the Canucks bounced back and took out Nashville in six and San Jose in five, with Luongo playing better and better in each round. People might not remember, but Luongo was particularly great in the series against the Sharks, especially in the game five overtime.

Still, the Finals rolled around, and the Canucks lost on home ice in game 7 against the Bruins. This series will be remembered for a lot of things (Tim Thomas playing like an alien god sent to the earth to conquer and destroy it for one), but one of the biggest takeaways was again Luongo’s play on the road. 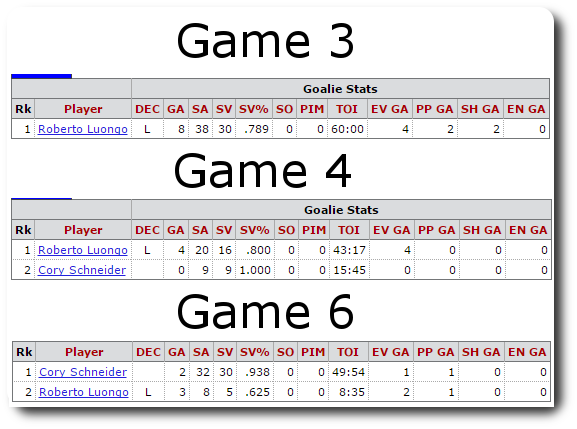 Regardless of what happened, there was a strong perception heading into 2012 that the Canucks had question marks in net with the emergence of Cory Schneider, and questions about if the Canucks could ever win with Roberto Luongo. Fans were divided on Luongo, many still feeling he was the best goalie the Canucks had ever had, and the right move was to put their faith in him. Others felt Luongo collapsed in big moments, and wanted to go with the guy who had risen through the system in Cory Schneider.

In part three, we will look at how Luongo eventually turned the criticism against him into his favor and won the hearts of Vancouver over again, without even having to win a game. @Strombone1’s emergence is up next.