Thursday night marks the return of the undisputed NHL Twitter champion, former number one goalie for the Vancouver Canucks, and the best damn tire pumper seen around these parts in years, the one and only Roberto Luongo.

While it seems like just yesterday that the Canucks somehow Jedi mind tricked their way into trading a package based around a broken down Todd Bertuzzi for a young up-and-coming Roberto Luongo and spare parts (Lukas Krajicek and Sergei Shirokov were sadly not the missing pieces of the puzzle), time has indeed flown by as Luongo’s eight years with the Canucks are firmly in the rear view mirror.

Most of the buzz about Luongo’s return is talked about in the way you might explain the best burger you’ve ever had, using urgent reverent tones trying to describe just what makes Luongo so great. Sure, there are some naysayers, but for the most part you get the feeling Lu will be met with a standing ovation on Thursday, with some “LUUUUUU”‘s thrown in for good measure. A far cry from the “I hope you break your leg, Kesler!” Ryan was met with upon his return.

Still, it wasn’t always such a loving relationship between Vancouver and its former goalie. In the beginning, it was almost a cold, professional relationship, where it felt like there was a considerable wall between Roberto and the media and fans. How did we end up here, then? Well, let’s take a fun trip down memory lane, shall we? 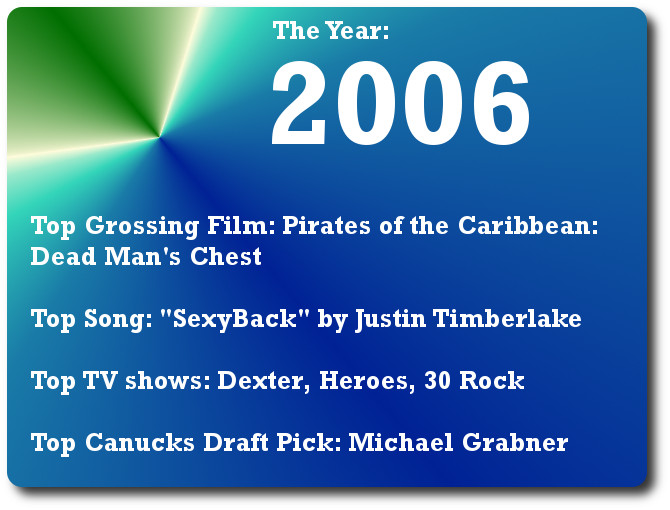 It was a strange time in Vancouver when the Canucks landed Roberto Luongo. After having struggled to find a starting goalie ever since Kirk McLean left town in ’98, the Canucks finally found themselves with one of the premier up-and-coming goalies in the league, Roberto Luongo aka “that guy who was always Team Canada’s goalie in the World Championships.” The best part? It only cost them Todd Bertuzzi (who had given up on being a power forward ever since “The Punch”), Bryan Allen, and Alex Auld.

Roberto arrived without a contract (he was an RFA at the time) and to be honest, there was some slight concern Roberto might not sign a new deal with Vancouver. After all, he had gotten into a dispute over his contract with the Panthers which led to the Vancouver trade in the first place, so maybe there was a chance he would sign a short term deal and look for the earliest exit when he hit unrestricted free agency a year later. It didn’t help that Roberto said he would need some time to think before he decided on signing a contract with Vancouver.

In hindsight it makes perfect sense that someone wouldn’t rush into agreeing to a new deal before they had time to embrace the impact of a trade. Luongo was trying to sign a deal with Florida, and even admitted later in Vancouver that he felt he was close to a deal with Florida before being dealt to the Canucks. To find out that was thrown out the window and he was on his way out of town the next day, well that would have caught most people by surprise.

Luongo would soon sign a four year deal with Vancouver (in what was Phase One of Operation: Grow Greasy Hair) but the optics were now set in place: Luongo had trouble leaving Florida and it would take him some time to warm up to Vancouver. It would set a tone of Vancouver constantly trying to convince Roberto to stay in Vancouver, one that lasted for quite a while. Luongo would even keep a Pink Panther tail on his first Canucks mask as an homage to his time in Florida. This wasn’t a big deal, but it did add to the general feeling that Luongo’s heart was in another place early on. 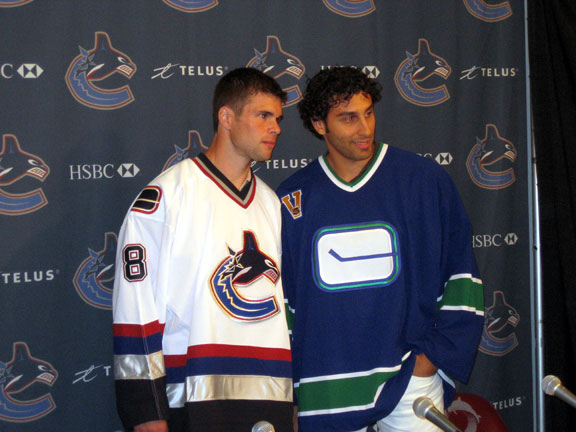 Another example of the pandering was during a Q&A session, where Luongo was asked if he had had a chance to check out Commercial Drive yet to see the Italian pride on display during the 2006 World Cup. Why wouldn’t Luongo, part Italian, want to move to a city that had such a huge Italian fan base? See how sunny it is today Roberto?? That’s TOTALLY what it’s like every day here, we promise!

Even though management insisted it wasn’t the case, this tone reached its zenith when he was named captain of the Vancouver Canucks.  Again, Mike Gillis insisted Luongo being named team captain (something he had to clear with the NHL as a goalie hadn’t been captain since 1948) had nothing to do with convincing Luongo to sign long term, but again, the optics looked a bit off to some of the fans. Why name a goalie captain in what amounted to name only, as he couldn’t even serve the on ice role of captain. Willie Mitchell was the person who would be allowed to talk to on ice officials. Luongo couldn’t even have the “C” on his jersey, instead choosing to symbolize it on his mask instead. It might have been that Gillis and Vigneault honestly felt Luongo was the best man for the job, but from the outside looking in, it smelt like pandering. 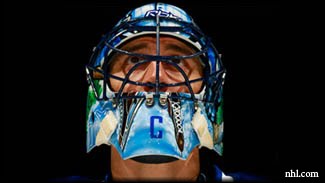 Still, this was a city starving for a star goalie, so all was forgiven early on. Dan Cloutier, the goalie Vancouver was trying to break up with but had refused to move his stuff out of the apartment, gamely told the press he was excited to battle for the number one spot on the team. Roberto for his part, didn’t laugh out loud when he heard this, and instead talked about just going in nets and showing what he could do.

Luckily Cloutier’s number one fan Marc Crawford had been named the coach in LA, and he convinced the Kings to trade for ol’ Dan. Dan went on to struggle without being attached to the West Coast Express (LA also forced Dan to wear a normal goalie mask which pretty much drained him of what little powers his previous Osgood-esque mask gave him) and Luongo went on to have one of the best seasons in Canucks goaltending history.

Just how good was it? Luongo went on to have a career high 47 wins, finishing the season with a .921 save percentage and fell just short of winning the Vezina (it went to Brodeur, but come on, this was a Canucks team that at times was fueled by a red hot Jeff Cowan. Yes, the Brabarian was relied upon for offence. Luongo WAS the Vancouver Canucks in 2006-2007. The man deserved the Vezina!)

Luongo’s first round match up in 2007 against Marty Turco and the Dallas Stars, although not the most exciting hockey ever played, was a goaltenders duel down to the last second. It was such a close battle that Turco ended up with three shutouts, a .952 save percentage, and a 1.30 GAA and he STILL managed to lose the series. In Luongo’s very first playoff game ever, he stopped 72 shots, leading the Canucks to a quadruple overtime winner.

The best part about this game (aside from the amazingly poor standard definition world we once lived in) was Kelly Hrudey sweating it out on air as he watched to see if his 73 save playoff record would be broken by Roberto. The relief on Hrudey’s face when it wasn’t broken was noticeable.

Luongo would go on to play some of the best hockey of his career against a Stanley Cup bound Anaheim team in round two, but would be stopped short in five games. This series is most well known for the shocked look on Dave Nonis’ face when Dany Sabourin started the first overtime period of game five while Luongo was indisposed (he was pooping), and because Luongo put his hand up to call for a penalty and was subsequently scored on to end the game later in overtime.

So how did Roberto Luongo’s first year in Vancouver, one that was universally heralded as pretty much one of the best first seasons you could have with a team, lead to periods of frustration between the fans and Roberto Luongo over the next several seasons? We will look at that in part two.