Opened last December, Powell Street Brewery has seen a huge demand for their three craft beers.  And while their website hasn’t even launched yet, it hasn’t stopped beer lovers from cramming in the doors to get at batches before they sell out.

Powell Street is one of many breweries that have found a home on the east side in the last few years and are centrally located beside other popular craft brewers like Parallel 49 and Coal Harbour Brewing.  Since opening, the team over at Powell Street have been busy focusing on three main beers:  the malty Old Jalopy Pale Ale, the hop filled Hopdemonium IPA and the dark Dive Bomb Porter.

Those three beers are the mainstay of Powell Street, and it shows. While the company hasn’t quite got a fully functioning website just yet, a regular newsletter informs fans when beers are available, and when they are selling out; sometimes a new batch can sell out in under a weeks time!

Creatively, Powell Street is looking to expand beyond their regular styles and have just released a Belgian Witbier for the summer.  They describe the beer as a perfect patio beer with hints of orange, coriander and ginger.

Currently Powell Street offers their beers in 650 ml bottles or refillable growlers.  They can also be found at the following liquor stores: 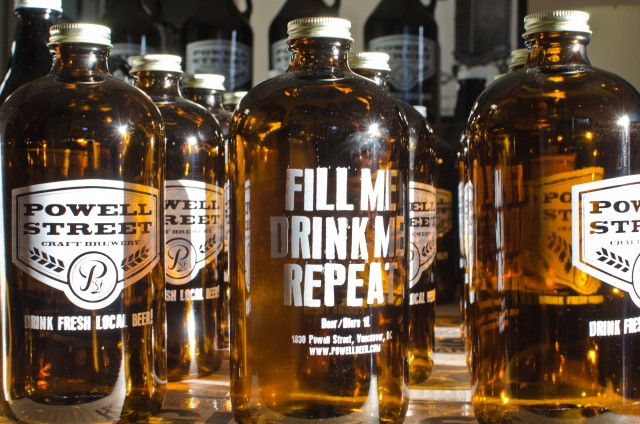