As the number of coronavirus outbreaks around the globe continues to climb, the World Health Organization (WHO) has now declared a global health emergency as a result.

The WHO made the declaration at a news conference today.

As such, Ghebreyesus said “we must act now to help countries prepare for that possibility. For all these reasons, I’m declaring a public health emergency of international concern over the global outbreak of novel coronavirus.”

And the greatest concern “is the potential for the virus to spread to countries with weaker health systems and which are ill-prepared to deal with it.” 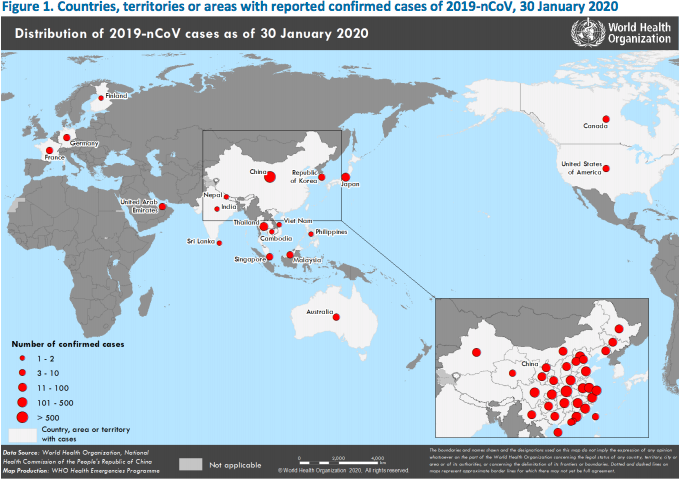 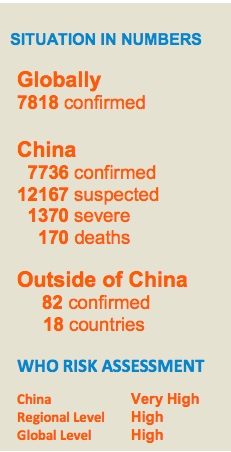 Coronavirus situation in numbers as of January 30 (WHO)

Canadians told to avoid all non-essential travel to China

The WHO announcement comes on the same day that the Government of Canada advised Canadians to  avoid all non-essential travel to China – the third time it has issued such an advisory over the past week.

Initially, Global Affairs said Canadians should avoid all travel to Hubei Province including the cities of Wuhan, Huanggang, and Ezhou, “due to the imposition of heavy travel restrictions in order to limit the spread of a novel coronavirus.”

Their advisory has since been updated to include avoiding all non-essential travel to China, not just the province of Hubei.

“There is an outbreak of a novel coronavirus in China,”  a government statement said. “Several airlines have suspended or reduced flights to and from the country. Chinese authorities have imposed travel restrictions in parts of the country. Further restrictions may be imposed on short notice. It may be increasingly difficult to travel within the country or in and out of it.”

On Wednesday, Air Canada said it would temporarily suspend all direct flights to Beijing and Shanghai from January 30 to February 29.

At this time, the airline operates direct flights to both locations from Toronto, Montreal, and Vancouver.