A Coquitlam mother of three is outraged after she received a bylaw violation warning because her children were being too noisy playing outside.

Jana D’Addabbo’s Facebook post, which is making the rounds on social media, shows a photograph of the “Notice of Violation” issued Saturday just before 2pm.

It advises D’Addabbo to speak to her children about being considerate of neighbours when playing outside, and to have them keep yelling and screaming to a minimum.

The Manager of Bylaw Licensing for the City of Coquitlam, Andrea McDonald , says the bylaw talks about “noise that disturbs the neighbourhood” and not specific times of day.

“If it’s generally kids playing, playing hockey that sort of thing, having a fun time, I would say generally or typically that would not be something we would take enforcement action. Our goal is to have a conversation with people to let them know that something perhaps is disturbing the neighbourhood.”

The warning was issued just before 2pm on Saturday.

McDonald says staff are investigating the complaint to see if the volume at the home was in violation of the rules.

“The standard is, is it unduly disturbing to the neighbourhood, that is what our investigation would be looking in to.”

She adds the notice of violation is a warning, not “ticket,” which would incur a financial penalty.

The mother says she’s ashamed and disgusted to be a City of Coquitlam resident, and that she rather her kids play outside then sitting on iPads not being active. 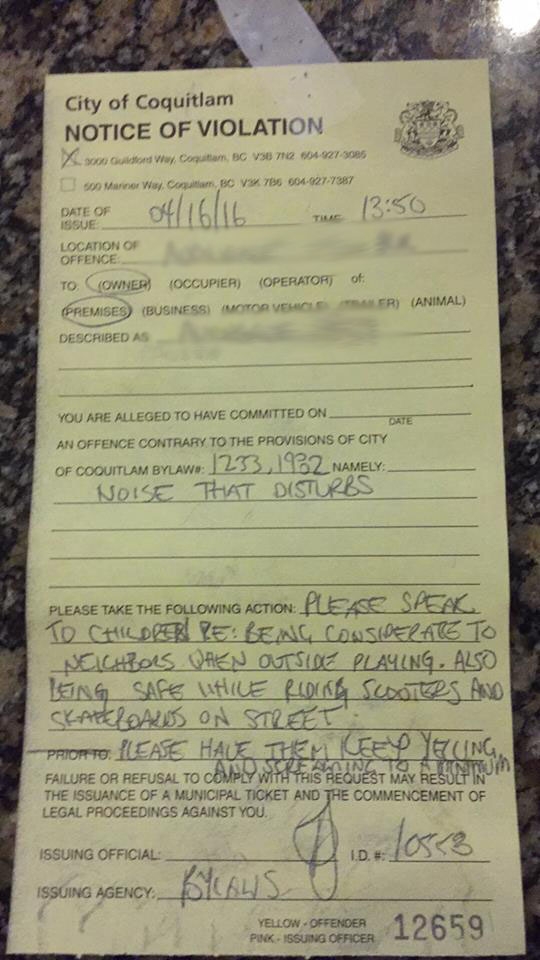