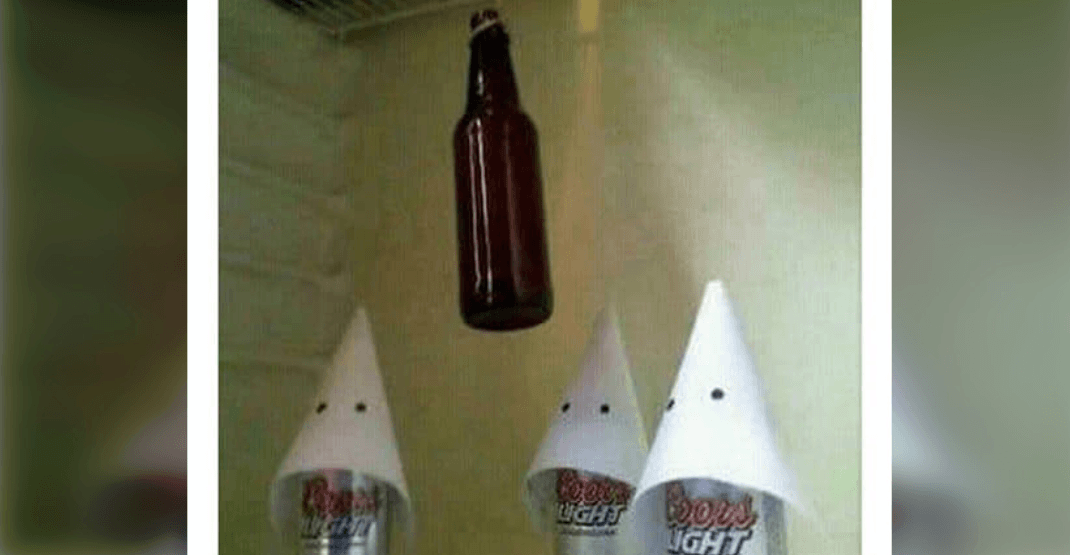 A now-closed Coquitlam company has faced heavy criticism after posting a photo depicting a mock lynching scene with beer cans and a brown beer bottle.

On June 3, Coquitlam Liquor, Tobacco, and Food Delivery’s website showed a picture of three Coors Light cans topped with white, pointy paper hoods and a brown beer bottle tied up with a noose.

The photo began making rounds on social media and the company was swiftly called out for posting the racist image.

The picture began circulating on Facebook last night. So far the backlash online has been swift.

Now it looks like the owner is responding to some of the negative reviews on Google. #Coquitlam #vanpoli pic.twitter.com/YhTcLaMpX8

In one response, the owner defended the image saying “Ita [sic] only a photo of beer bottles so it’s not racist.”

Tasyana Siouras who lives in Maple Ridge saw the image posted in a local Facebook group for people of colour. She said everyone in the Facebook group “did not take it well.”

“All of us think it was something not to be joked about,” she told Daily Hive.

For Siouras, the photo was telling of how racism still exists in Canada, despite opinions that it is worse for people of colour in other parts of the world.

“There have been several people in my life who have told me that by living in Canada I shouldn’t be worried about racism or I shouldn’t be too concerned about it because it is worse in America than it ever is in Canada,” she said.

“So something like that to happen 20 minutes away from where I live… was not too surprising for me which is sad to say because I am aware that racism does occur in Canada because I am black…but it was just a really good eye-opener for the people who say it doesn’t occur in Canada to see that it does occur very close to home for most people.”

Daily Hive attempted to reach out to the owner via phone but did the call went directly to voicemail.

“You’re not really willing to stand up for what it is that you’ve done and apologize for it. You’re simply saying that it’s simply a photo that we should all be laughing at.”

“My fear is that they are just going to rebrand it as a different business name, a different model, but with the same owner and try doing it again and not having learned their lesson.”