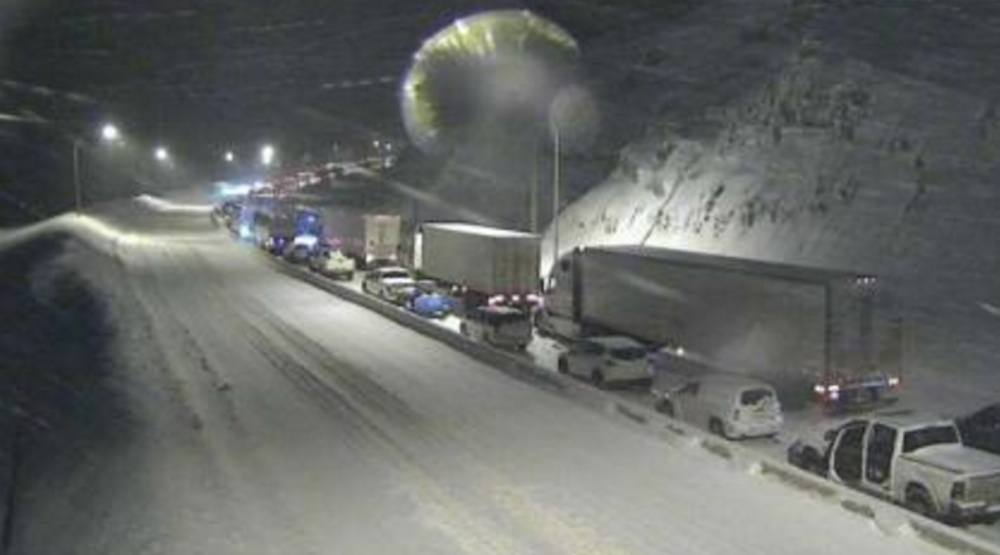 BC Ministry of Transportation

UPDATE at 8 am Saturday: Both the Coquihalla Highway in the northbound direction and Trans-Canada Highway remained closed, with stranded motorists and their passengers spending the night in their cars. Transportation crews brought food and water to those stranded on the highway.

At this time, it is estimated both the Coquihalla northbound and Trans-Canada highways will open by 10 am, but this could change. Southbound lanes on the Coquihalla reopened earlier this morning.

Hundreds of cars on the Coquihalla Highway, also known as Highway 5, are stranded this evening due to a decision to shut down the route in both directions.

According to the BC Ministry of Transportation, the route is closed between Hope and Merritt due to poor road conditions from snowfall and freezing rain leading to spun out trucks. And as a result, there is high congestion along the route – approximately 2.5 kilometres of stalled bumper-to-bumper traffic in the northbound direction.

Some people have been stuck on the Coquihalla Highway for more than six hours late Friday evening.

#BCHwy5 closed in both directions between #HopeBC and #Merritt due to spun out trucks & severe traffic congestion.https://t.co/DPB778Mttz

@MechanicalAdlem I have called our contractors, they are saying there is a 2.5km back up NB. Hoping to have more info for you shortly.

The latest closure was announced by the Ministry at 9 pm. At this time, it is believed that the route could reopen in the northbound direction at 1 am, but there is no estimate for the southbound direction.

One alternate route, the Trans-Canada Highway (Highway 1), is also closed this evening between Yale and Boston Bar. Maintenance crews will be clearing over 20 avalanche control sites overnight; the route is not expected to open until Saturday morning, between 6 am and 9 am.

However, for those who need to travel to the interior, Highway 3 is currently open.

Any non-essential travel through the mountain highways should be postponed until conditions improve.

Facing similar conditions 24 hours ago, many drivers and their passengers were also stranded overnight on Thursday when poor road conditions forced a road closure. At one point, Metro Vancouver was completely cut off from the BC Interior and the rest of Canada as all mountain highways, including Highway 99 through Whistler, had shut down. Most of the routes reopened later in the day.

Just because it said it was open, doesn’t mean you should go. #coquihalla @DriveBC #whatamess #driversafety pic.twitter.com/bSXRdWLi8T

The backlog at the #coquihalla summit is massive. Good luck everyone! pic.twitter.com/H9ipl26nQn

And we are through! Cars only being let through #coquihalla @GlobalBC pic.twitter.com/0ZTrT9hU9l

I made the news 😂 pic.twitter.com/XsCQrD0bhb

The #coquihalla has been at a standstill going on for a hour @DriveBC @KGordonGlobalBC The wind is picking up too pic.twitter.com/wd6xI56oKU

Well, there’s a #firstforeverything. Spent the night on the #Coquihalla with hundreds of other travelers. Luckily baby Morgan and our Tiger cat were home safely with my parents. #winterdriving #highwaythruhell #socold #clinicretreatfail #backhomesafeandsound #latergram