A beautiful new letterpress map of Vancouver uses the simplicity of circles to illustrate the city’s layout.

Part of a series of 15 global city maps, Portland, Oregon-based artist Archie Archambault has now expanded his collection to include its first Canadian city. Archambault’s “minimalist Vancouver map in a mid century style” was created with the input of 15 Vancouverites.

“Archambault started printing maps on a 19th-century letterpress machine in 2011,” explained Slate in a 2013 profile of the artist and his work, when it was a smaller collection of U.S. city maps.

The artist told Slate his philosophy behind using circles:

“Mostly it’s an aesthetic decision,” he says. “The theory behind it is that a circle is the softest shape for the eye, so it’s easier to absorb information.” Most neighborhoods don’t have hard corners, he says. “The circle is the most important shape, it’s the simplest shape, the most beautiful.” 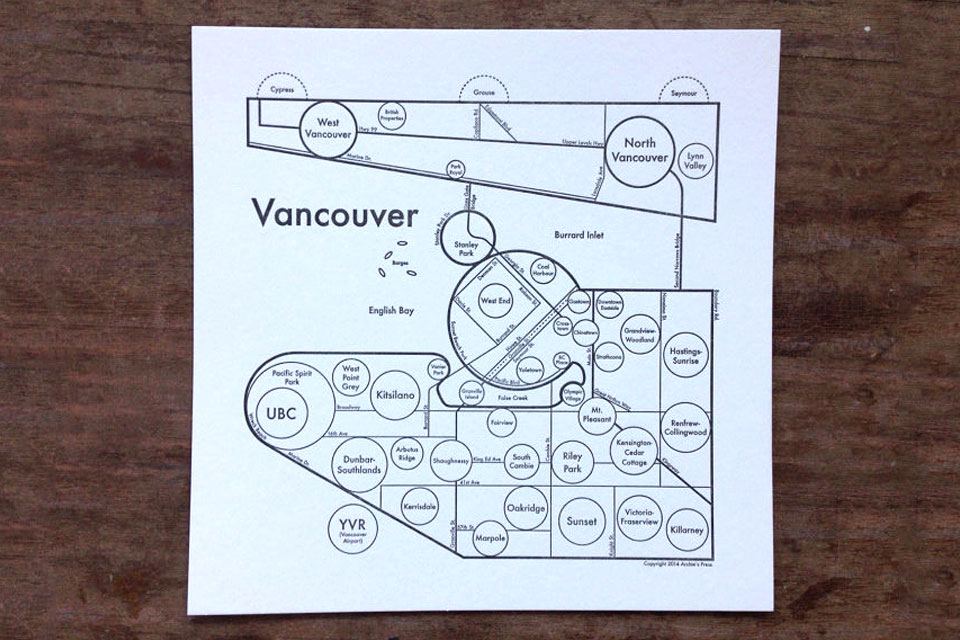 Archambault’s maps marry form and function; these stark melds of typography and circles are meant to be used for navigating and getting to know a city. He explains on his website:

New research indicates that GPS’s are hindering our ability to create mental maps of our surroundings. My maps aim to install a “Map from the Mind” for each city, simplifying structures and districts in the simplest terms.

Also in his collection are cities such as Amsterdam, Denver, New Orleans, Chicago, and of course his own city, Portland. The Vancouver map comes in an 8″ x 8″ letterpress print (USD $22) and a 17.5″ x 17.5″ screenprint (USD $29), and they are available for purchase online through Archambault’s Archie’s press Etsy shop.