A classic Vancouver day of overcast skies and light showers mark the last day at The Warehouse Studio for Converse Rubber Tracks.

The Belle Game roll into the space with their gear and the last session chugs along like clockwork. Adam Nanji re-strings and tunes his guitar while the rest of the band set up their instruments. Singer Andrea Lo sips on some hot tea and warms up her voice for the session. 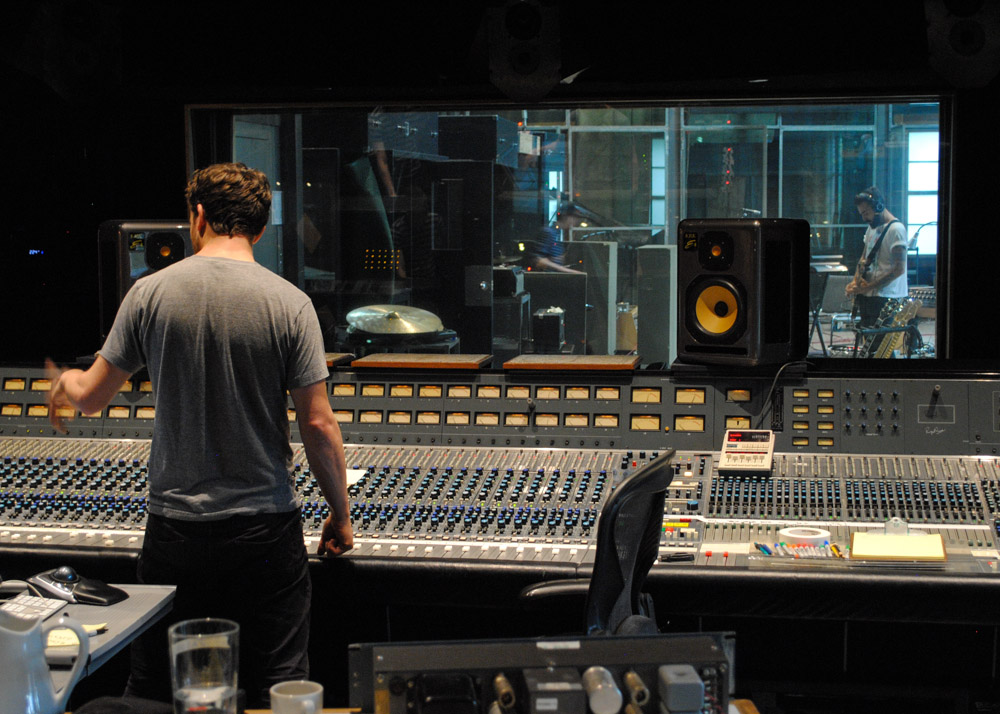 We got a chance to sit down with band members Andrea Lo (vocals), Katrina Jones (synths), Adam Nanji (guitar) and Alex Andrew (drums) to talk about their experience with Converse Rubber Tracks so far. 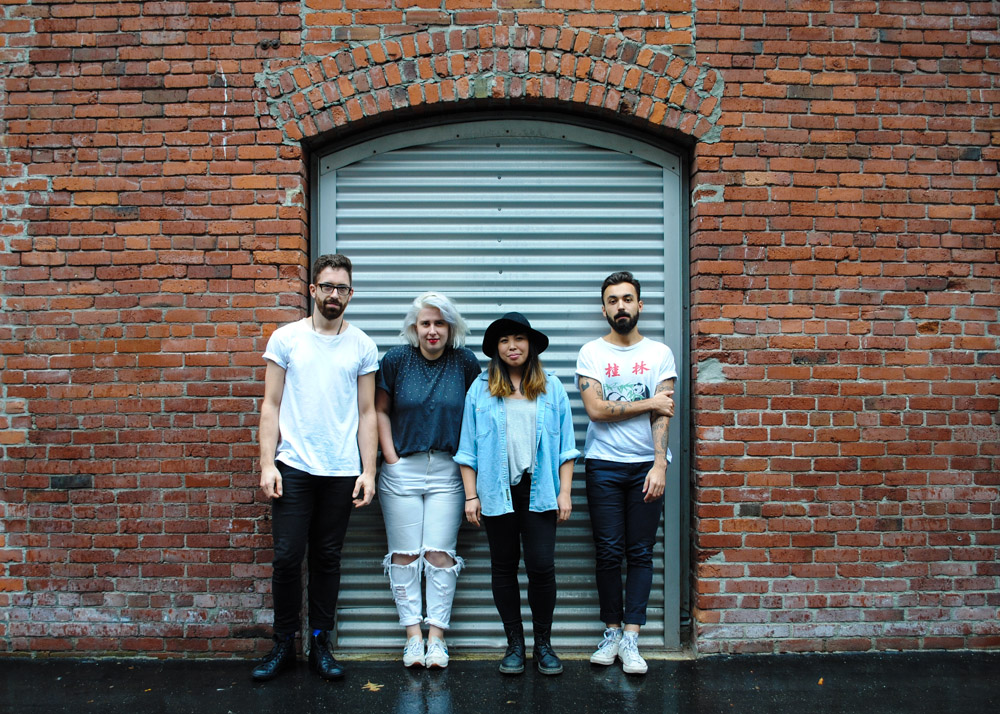 Andrea: I’m Andrea and I sing.

How was your summer? I know you guys played a bunch of festivals, travelled and were also working on the new album as well?

K: Yeah, this summer we were doing exactly that. We played a few festivals and we just finished actually, about a week ago, recording our album. We still need to mix and master and finish it, but yeah we finished recording this summer. 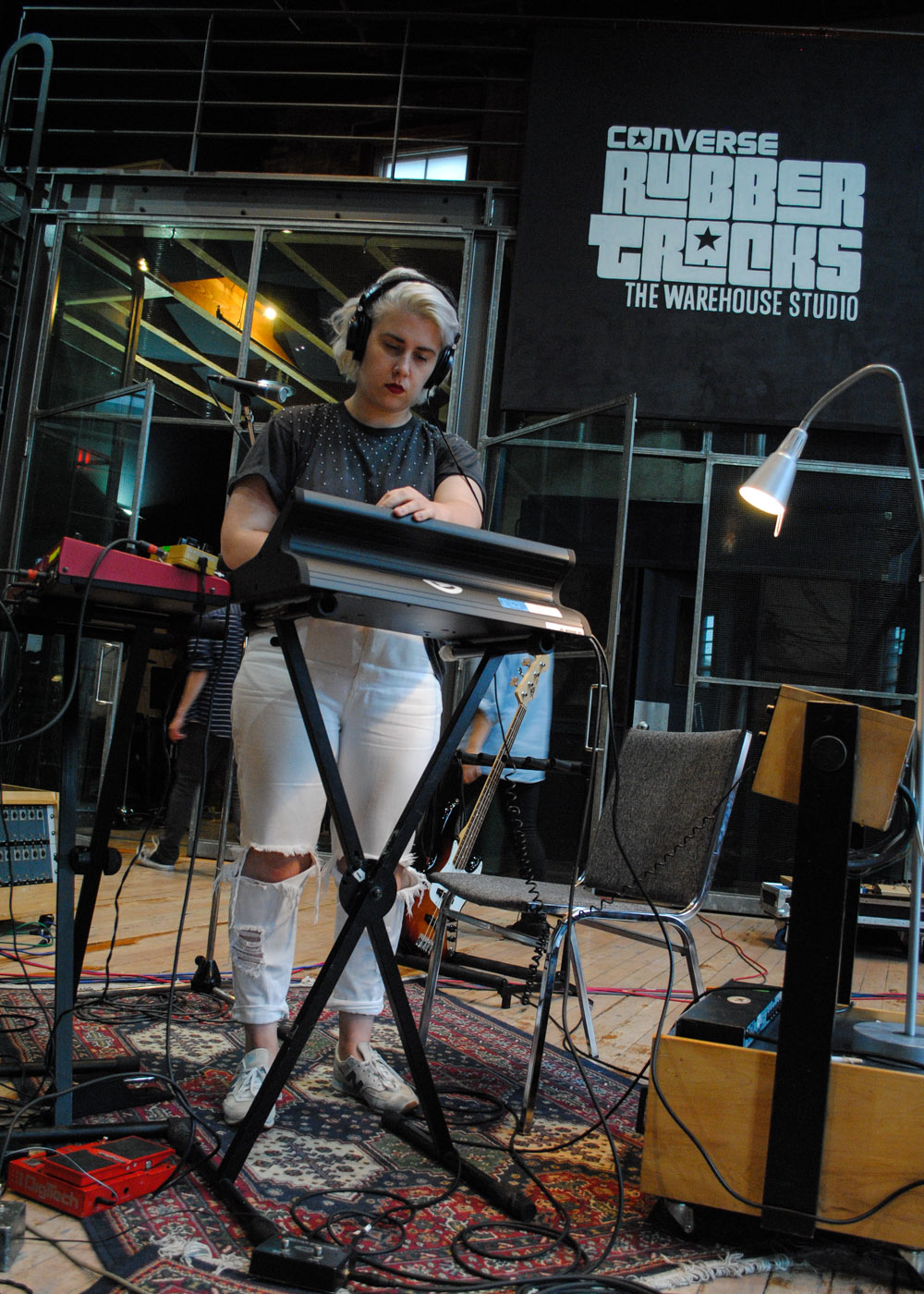 Did you do any recording in Vancouver at all? Or kind of just back and forth?

K: Everything happened on the east coast. We started in February and did two weeks in Montreal first. Then Andrea and I did two weeks in April and May recording vocals, then the four of us went just now to finish it, and that was all in Toronto.

AA: I think Toronto is still considered the east coast even though it’s not at all on the coast.

K: Unless it’s on the coast of a big lake! Haha!

Tell us about your experience with Converse Rubber Tracks so far

AA: It’s been really cool. It’s really amazing to walk in and get a free studio day with all this amazing equipment and this incredible room that’s so beautiful on the inside. I think we all feel really lucky. It’s also cool because we just did finish recording our album, but to have a bonus day to come in and do all the things we maybe wouldn’t normally try or get to do. To have a day to just experiment.

AL: In addition to that, the team is really great, very welcoming and knowledgable. The fact that they’ve been going hard for however long and knowing that this is their last day in Vancouver, their 12th day in a row, and they’re gonna go on to other places and keep working; it’s really impressive to see how engaged they still are. So engaged and so excited and interested and their ears somehow are still fresh. Pretty cool. 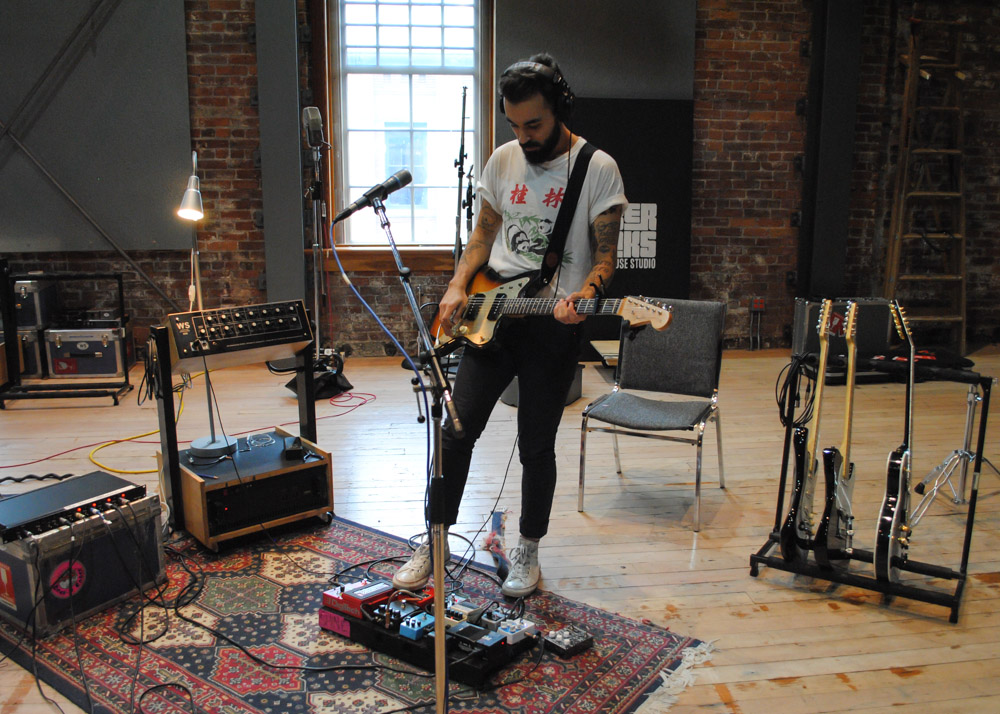 You guys have spent most of the year working on your new album. Is there anything you can leak to us about it?

AA: All we can say is that it’s very, very different from our last album. So if you didn’t like us before, you might like us now.
[laughter]

What are you guys working on for this session with Converse Rubber Tracks?

K: Well, we’re working on the things for the record that we didn’t really get a chance to finish. So right now we’re working on some little intros and outros and interludes that we were thinking about putting on the record. Then we thought, since we’re coming in here, just this week we decided to write a new song. So if we get to that today, it’ll just like all stuff that may or may not be on the record. 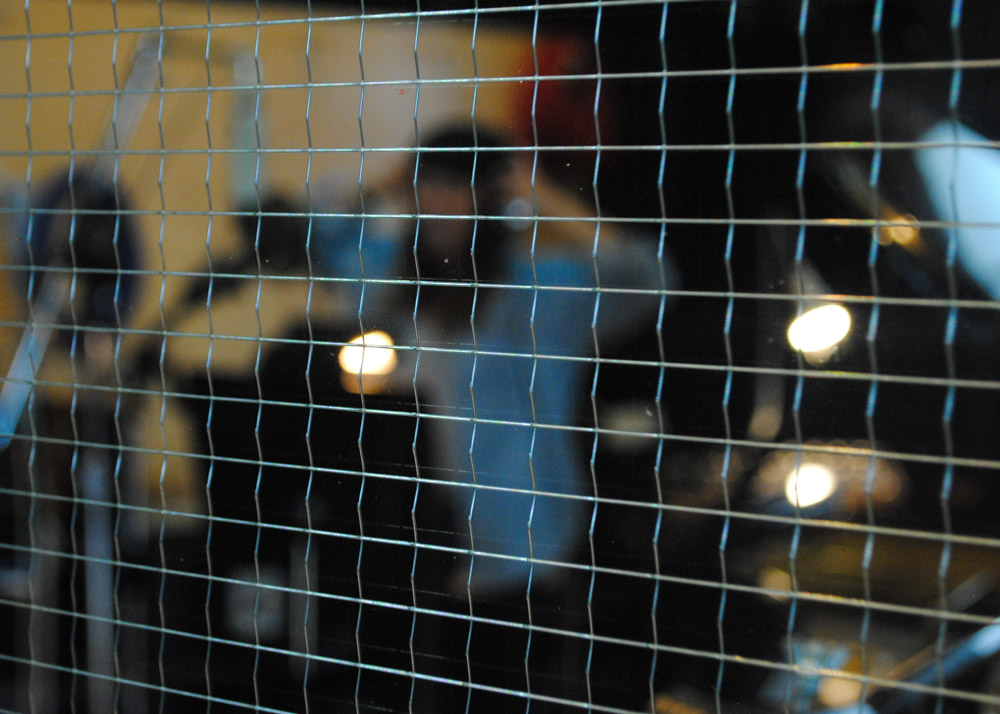 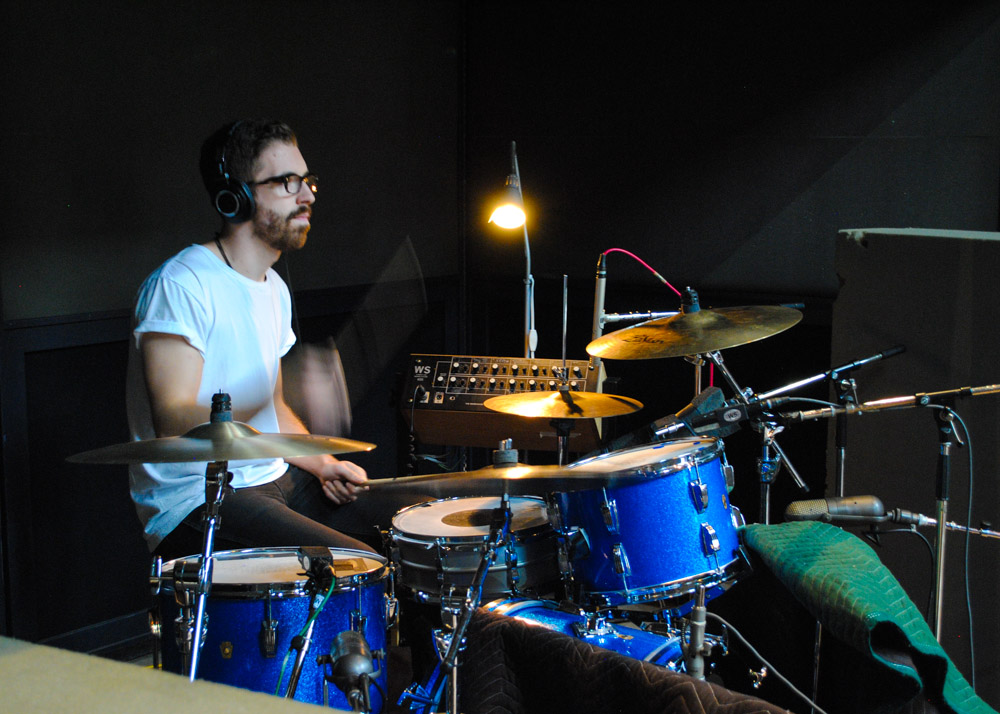 Generally, you guys live in Vancouver and you just travel around to tour and play festivals and record. Is there a reason why you went East to record your next album?

K: Yes, it’s because our producers are based there. It just worked out that way, having us go there to work with them instead of them coming here.

AA: People usually ask us, well isn’t it cheaper to just fly a few people out instead of flying four people over there with all your bags? Where in reality, the deals that we’ve been able to get and being able to stay with friends and knowing certain people and certain studios and that kind of thing, it actually ends up costing pretty much the same.

AL: Also, we were really spoiled when we went to record part of the record in Montreal and part of the record in Toronto. It worked out perfectly because the gear was like a candy store at the last place we were in, and I don’t know, it’s good to get out of the city too. To not have to be involved in a day to day life while trying to work on a creative process was really great. No distractions and just creating music. 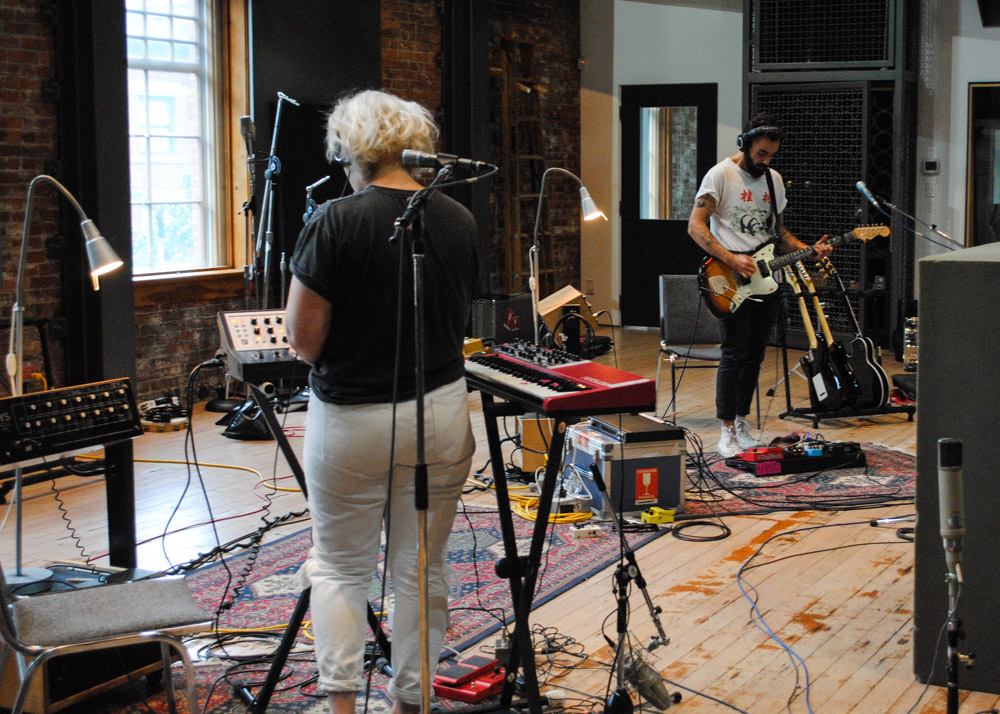 The next Converse Rubber Tracks “pop-up” studio in Vancouver will be at The Warehouse Studios from Monday, October 19 to Friday, October 23. Musicians of all genres in the Vancouver area are invited to apply for free studio time to record their original music alongside a team of experienced engineers at no cost. At the end of their studio time, the artists retain all the rights to their own music. Registration for this opportunity opens today on converse-music.com/rubbertracks/vancouver.