He had seen his golden child Ronda Rousey lose her title and her mystique months earlier.

Heck, he even saw a Holly Holm vs Ronda Rousey re-match lose some steam when Meisha Tate took out the new champ with a late submission in round five of the co-main event of 196.

And now his last shining light in the battle for your money was snuffed out when Nate Diaz took out the Notorious One in round two of the main event at UFC 196 with a rear naked choke submission victory.

If you take away the McGregor mystique, the result of this fight shouldn’t be that shocking. You have a guy fighting up two weight classes against a guy who normally fights above him as it is. In a UFC world where fighters dehydrate themselves to lose 15-20 pounds just to make weight, Conor walked in at 168 pounds.

Nate Diaz has a good reach, is a taller fighter, and is a good striker. Sure, he might not have killer power, but the man can throw punches in volume. Add in a great BJJ base for Nate, and it’s not that surprising that McGregor ran into trouble.

But that was the brilliance of McGregor. He had a way of making you believe anything was possible. “Mystic Mac” became a thing because McGregor kept calling his shots, and he kept coming through on them. Sure, the UFC had seen a bit of McGregor in Chael Sonnen, but McGregor was different. McGregor was winning all of his fights, and topped it off by knocking out one of the greatest pound for pound fighters in Jose Aldo.

It felt like there was nothing he couldn’t do once he put his mind to it. This is a man who stole the belt from Aldo during a verbal exchange and declared himself “The King” then went out and did just that, he became the king. It was this very bravado he kept backing up that made him the most money man in the UFC. He was like a real life action star, coming through no matter what.

Except that is the cruel nature of MMA. Styles make fights, and as Ronda found out against Holly, sometimes believing in yourself can only do so much. 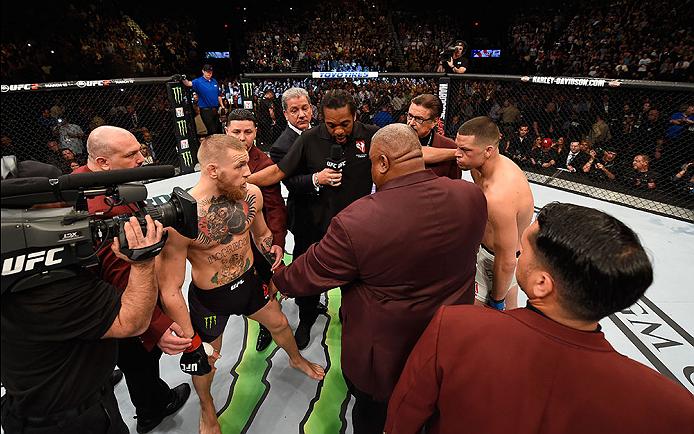 The fight started off with McGregor actually winning the first round. He was landing punches, and even cut Nate open. Blood was flowing heavily down the side of Nate’s face. You began thinking to yourself “He’s going to do it, that crazy bastard is going to do it.” It felt like just a matter of time until Conor landed a knockout punch.

There were some warning signs, though. Nate’s reach was a bit of an issue. Conor had to jump in trying to land his overhand left, and Nate’s jab was finding its range. Conor’s belief in himself, always set to extreme, meant his hands were down by his sides for a lot of the fight. Conor preferred using head movement and footwork to avoid punches, but again, some of Nate’s punches were landing.

Then in the second round things began to unravel when Nate landed a couple of punches that wobbled Conor. He fought through it, and even tried a return barrage of his own, but Nate wasn’t phased. His “punches in bunches” kept landing to the point where McGregor hit that point that all scared strikers hit, the “oh crap, I’m in trouble, I’d better shoot for a takedown.” point. Which is where Nate’s excellent BJJ took over. There aren’t many worse people you can shoot on while punch drunk than Nate Diaz.

The only thing shocking about the rear naked choke he slapped on was that he didn’t raise two middle fingers while doing so.

In many ways, the loss mirrored Rousey’s loss against Holm.

Both fighters talk a lot of trash, and it seemed like McGregor was ramping it up against Nate. He was doing his usual verbal bullying the entire time.

McGregor even mentioned fighting Floyd Mayweather days earlier, which seems to be the death knell for any on top of the world fighter, much like it was for Rousey.

During the weigh ins and stare-downs this week, it was McGregor who seemingly over-reacted to Nate Diaz, once punching the hand of Nate, and another time flinching in response to a head fake. Rousey famously lost her cool over Holms hand being near her face during the weigh ins as well.

It felt like both Rousey and Conor had been built up to such impossible heights that the only direction left was a great tumble down.

To be fair to Conor, though, this fight felt like it could have gone either way. If these two fought again you certainly wouldn’t assume Nate would win. It’s just that on this day, Nate got the better of McGregor. McGregor himself admitted after the fight he wasn’t efficient enough with his striking, and he certainly looked tired in the second round after getting rocked by Diaz.

Losses happen all the time in MMA of course. Many just didn’t expect it to happen to Conor tonight.

See ya at #UFC200, @TheNotoriousMMA. Your fairy tale is over. You got nowhere to run now. Time to a rematch, pussy. pic.twitter.com/67fmic8qxG

Where do they go from here? Minutes after the fight ended, Jose Aldo called out McGregor for a re-match at UFC 200 (in which there is no way he wrote that tweet, but good on his PR people for it). Despite the loss, seeing how fighters like McGregor and Rousey respond is still a huge draw.

It should also signal to McGregor to stay within his own house, and stick to the 145 division, or the very least, 155. Nate Diaz isn’t exactly a power guy, so one could only imagine what Robbie Lawler might do to Conor.

As for Dana White, he’s probably backing up a dump truck of money to GSP’s door as we speak.

As for the fans? Jon Jones remains as one of the last mythic fighters (in the octagon at least) in the UFC, and he takes on Cormier in UFC 197.

Will another fabled legend fall? Or will Jon Jones shine once again?