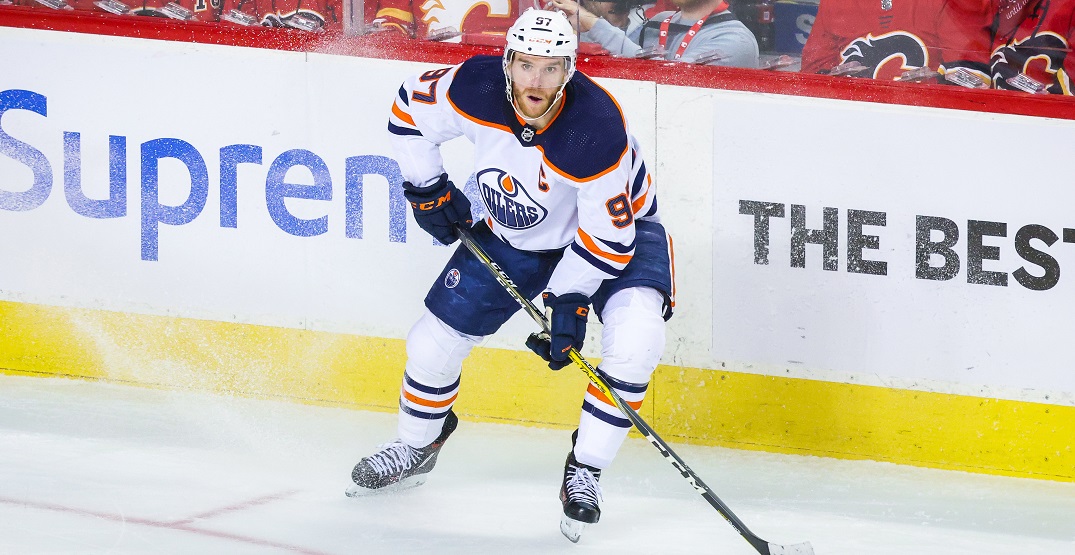 Connor McDavid just might be able to singlehandedly drag the Edmonton Oilers to a Battle of Alberta series win.

And after that? Who knows, but it really does seem like anything is possible when #97 is on the ice.

During the Oilers’ 5-3 win on Friday night over the Calgary Flames, McDavid had another performance for the ages, contributing a goal and an assist as the series evened out at one game apiece.

Considering he put up a league-leading 1.54 points per game this season, it’s no surprise to see him hit the scoresheet on multiple occasions.

But the goal itself was one of those that just stopped about everyone in their tracks — including Calgary’s defence — to cut the Flames’ lead from 3-1 to 3-2.

“Always hungry to make a play, so just happy to contribute,” McDavid said.

What’s not ho-hum is the stats that McDavid now has through nine playoff games: six goals, and 14 assists for a total of 20 points. No player in the last 30 years has hit those heights in their first nine games.

Oilers Connor McDavid is the fastest player in the past 30 years to reach the 20-point mark in the postseason pic.twitter.com/oF3OpLWQhG

Only seven players in history have even hit the 20 points mark in nine or fewer games.

And as the Oilers continue moving on, we’ll only continue to see McDavid’s name come up in more distinctions, records, and categories.

Wayne Gretzky set the record for most points in a single playoff year with 47 in 1984-85 in 18 games. McDavid’s on pace for 40 if he plays 18 games, but it’s not TOO far out of the realm of possibility that he could actually break the record should a) the Oilers keep playing and b) play enough games for him to overtake Gretzky.

It’s a tall task, for sure. But would you be that much of a dreamer if you believed he could actually do it?

McDavid became just the second player in NHL history to have eight multi-point performances in his first nine games of a single playoff year. The only other player to do it was Toronto’s Darryl Sittler, back in 1997.

Only five players have had a longer streak of multipoint games in the playoffs, with McDavid currently sitting at fourteen points in his last five games.

If it wasn’t obvious by now, McDavid’s teammates are just as much in awe as you or I.

“Everybody who’s watching it, you don’t have to say much. It’s just evident. He’s the best player in the world and he’s pushing himself,” Oilers forward Zach Hyman said. “But it’s hard to keep pushing and keep challenging yourself. And he’s a guy who wants to win more than anybody. So you’re seeing him push himself, push our team and those are the results.”

Connor McDavid and the Oilers take the ice tomorrow night at 5 pm PT/ 6 pm MT/ 8 pm ET. Keep the record book handy, because it just might be broken once again.