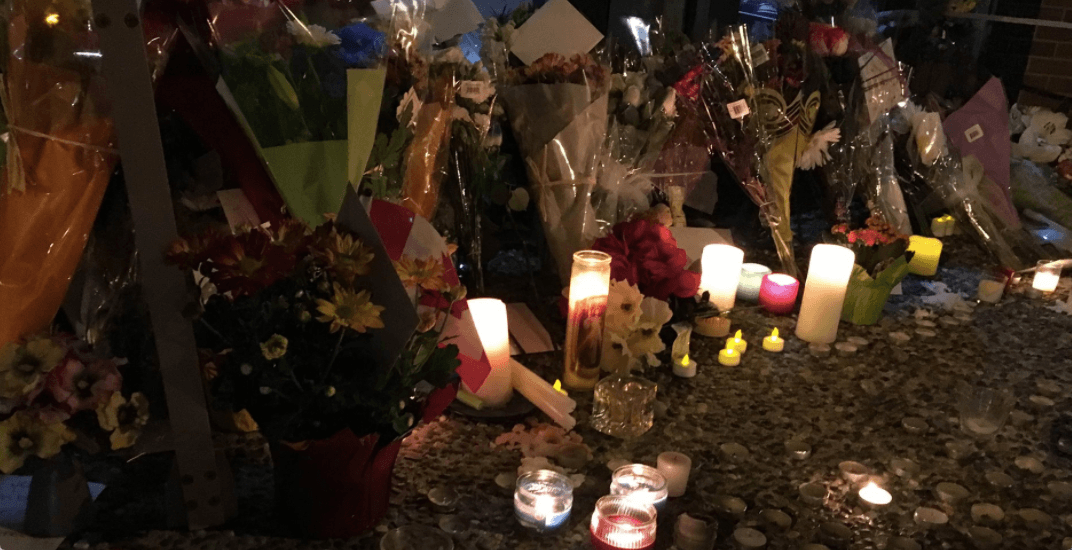 A growing memorial sits outside of the Abbotsford Police detachment and condolences are pouring in for APD Const. John Davidson, who was killed in the line of duty on Monday.

Abbotsford Police Const. Ian MacDonald tweeted a photo of the growing memorial at the detachment.

In the deepest darkness there can be light. We see you. So many of you. Thank you for being there for us. #abbypd pic.twitter.com/PoiGf0u90X

In a statement, BC Premier John Horgan said he was “deeply saddened” to hear the news.

“My heartfelt condolences go to the family, friends and colleagues of this officer at this very difficult time,” he said. “As British Columbians, we are filled with grief at this tragic loss and give gratitude to all those who put their lives on the line for us every day.”

Prime Minister Justin Trudeau also sent his condolences in a tweet that was posted on Tuesday.

Police work in harm’s way to protect us all. My deepest sympathies to the family of the @AbbyPoliceDept officer killed in the line of duty.

On behalf of #VPD our deepest condolences to our friends & family @AbbyPoliceDept as we mourn the loss of their officer today #LODD #EOW #Hero #PoliceFamily @VancouverPD pic.twitter.com/GRzJwGcORS

A  guard of honour also took place Davidson along Highway 1 on Monday night.

So many officers lined up at the 200th Street exit. #FraserValley pic.twitter.com/J8MMXnfy1O

We are proud to have played a role in a hero’s escort for @AbbyPoliceDept Cst. John Davidson last night. https://t.co/YSdjmV7sYf

Other police detachments offered their support via social media.

Our flags are at half-mast in honour of the sacrifice made today by @AbbyPoliceDept. You are in our thoughts. pic.twitter.com/gTjMAhCahT

Today our flags fly at half-mast for the fallen APD officer. Stay strong and courageous @abbotsford_police_department

Shocked and saddened. Our deepest condolences to the family and your officers. Stay strong @AbbyPoliceDept pic.twitter.com/qne6VE7Amy

Deeply saddened with the news of a fallen hero. The @deltapolice stand with @AbbyPoliceDept #Abbotsford pic.twitter.com/IER2wZX2RS

Sad hearts, our thoughts and prayers are with Abbotsford Police and family. pic.twitter.com/PaoSmwd2kC