A petition was filed in the Supreme Court of British Columbia on May 21, 2014 by the FCRA seeking the Court’s direction to rectify all activities inconsistent with the park-zoned False Creek land owned by Concord Pacific.

The False Creek Residents Association (FCRA), a majority representative that embodies the False Creek community, has recourse to the enacted By-Law. 6650, which adopted the False Creek “Development Plan”.  The plan established the framework for development of properties, including the Concord Pacific grounds, allowing the operation of the temporary sales centre on Lot 9 which is supposedly dedicated for park space development.

According to FCRA, since 2005 the City has issued consecutive 3 year temporary permits allowing Concord to market its condos on park-zoned land.  Vancouverites, especially those in the community, have witnessed various commercial activities on the lands without requiring any formal “change of use” permits.

The petition filed to the Supreme Court of British Columbia argues that the Official Development Plan stipulates the land is to be used strictly for public park and recreation purposes.  Even the relaxation provisions available to the developer must be compatible with the proper and permanent intended use of the False Creek property.

On July 24, 2014, Concord Pacific filed an application seeking to be added as a Respondent to those proceedings so that it can file its own motions and appeal any adverse ruling. 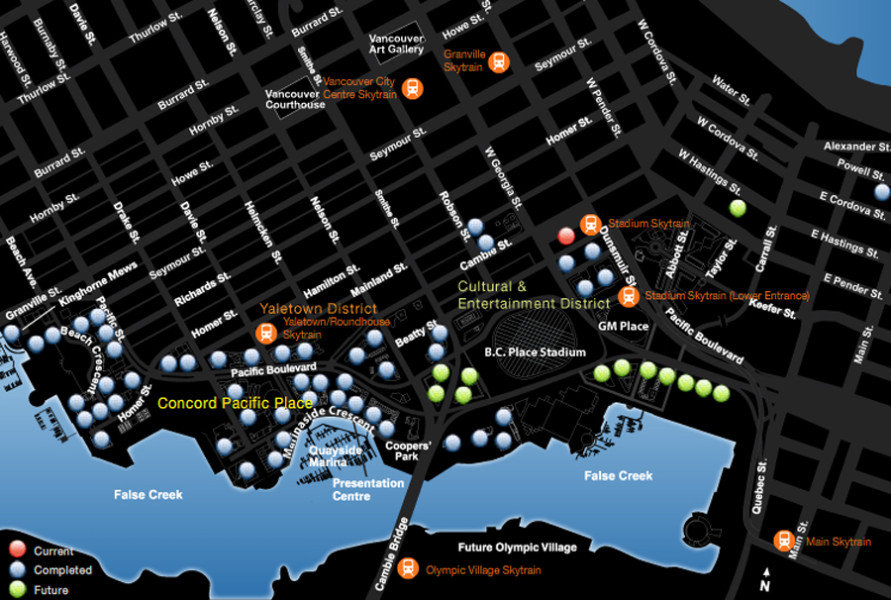 Concord supports its application under the “Hardship Provision” by claiming that there are issues to be resolved by the Court between it and the FCRA.  The developer argues for its presentation centre is uniquely positioned to provide potential buyers with a premium sales experience.  Diminishing such an asset would cause financial loss and hardship.

Currently, the hearing for FCRA is scheduled on September 11, 2014. The Concord Pacific application to be a Party to the judicial review will be on August 26, 2014.

FCRA released the summary of the petition here