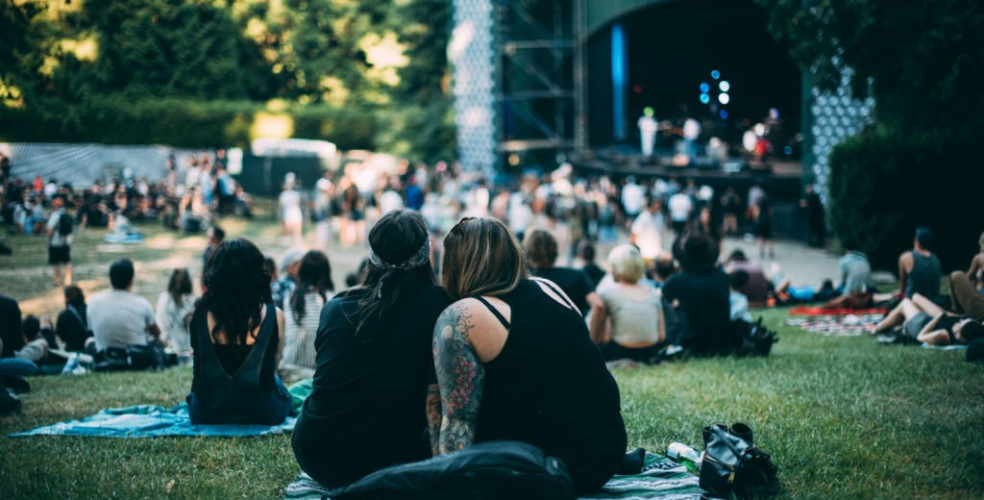 Let the summer concert season commence! June in Vancouver is officially summer, with the start of the city’s festival season. Besides some rocking shows under the sun, the Jazz Festival is featuring a few legends, and some of our fave locals are back in town.

Rock into summer with these shows in Vancouver this month!

Folk rockers The Lumineers are set to heat up Deer Lake Park with a sold out show on June 1. The band scored a huge hit in 2013 with “Ho Hey” and their latest disc, Cleopatra, debuted at number one on Billboard’s Album chart. Soak and The Sleepwalkers will serve as opening acts.

Hide your kids and hide your wives because heavy metal rockers LoG blow through Vancouver on June 1. The band released their seventh album VII: Sturm und Drang in 2015 and once their North American shows are completed, they’ll embark on an Australian tour with Slipknot.

Brand New’s fan base is dedicated. Their current tour, which often has two back to back dates, have sold-out across North America. After Jesse Lacey’s “I’m going to tell you right here and now, this isn’t going to last much longer,” confession on tour in October 2015, fans are bracing themselves. But an upcoming release may also bring another Brand New tour later this year.

Dallas Green, who records under the name City and Colour, is celebrating the release of If I Should Go Before You with a cross-Canada tour. Fans who shell out the extra $75 for the VIP experience gain access to Green’s pre-show soundcheck and receive a vinyl copy of a rare live album.

Canadian electronic duo DVBBS are back, and taking over the Commodore early in June. Brothers Chris and Alex bring their Tsunami through, and as usual, expect this to be high energy, and a ton of sweat kind of show (in the best way possible).

Vancouver electronic trio DiRTY RADiO return for a homecoming show with The Life Times, IMUR, and Savemeboots. Our hometown boys’ single “Numbers” recently passed 3,000,000 streams on Spotify, and counting. This local line up of talent is one to add to your list.

The PEAK Performance Project alums and local musicians are hitting the stage at the PNE during the Vancouver Craft Beer Week Festival. With concerts starting on June 3 at the PNE Fairgrounds, bands like JP Maurice, Good for Grapes, and the Matinee take the stage on different days. Check out all the craft beer week and music action!

At the Drive In

The 90’s band At the Drive In are back on the road. The Texan rockers reunited for a second time and are expecting to be releasing new music soon. The band is taking this tour all across North America, with a stop right here.

Toronto’s dvsn are in Vancouver this month for their debut show at Fortune Sound Club. On OVO’s label, dvsn released a highly successful debut album earlier this year, and will be joining Drake for the massive Summer Sixteen tour. This is a good chance to check out dvsn in a small venue before he’s huge.

Famed Dutch electronic producer Bingo Player returns to Vancouver as part of a summer tour. One of DJMag’s top 100 DJ’s, the once-due, Player is known for several hit singles including “Get Up (Rattle)” and “Knock you out.”

Tropical house producer Goldroom is in Vancouver this month for a different kind of party – he’s taking you on a boat. That’s right, Goldroom’s High Seas Boat Tour takes place aboard the Abitibi Boat, with guests WMSTUDIES, Can I Live, and Momantix. Don’t miss the boat!

When: Saturday, June 11 at 2:30 p.m.
Where: Aboard the Abitibi Boat, boarding takes place at Plaza of Nations Marina, 250 Pacific Blvd, behind Edgewater Casino, Vancouver
Tickets: Available online from $35. 19+

Progressive house producer Elephante may seem like the new kid on the block, but he’s quickly making a name for himself in the industry. Based in LA, this Harvard graduate sells out shows globally- so this one may be no exception.

James Taylor is a phenomenally talented singer, a songwriter, a guitarist, and above all else, a really decent guy. Taylor was deeply saddened by the devastation in Fort McMurray and announced that he would donate all proceeds from his Edmonton and Calgary concerts to the Alberta Fires Appeal. The singer says he hopes his act of kindness “will make a difference and that others are inspired to join in.”

After 45 years in the music biz, Chicago was finally inducted into the Rock & Roll Hall of Fame earlier this year. To celebrate, the band (minus former lead singer Peter Cetera, who left the group in 1985) is doing what they do best: tour. Expect their show at River Rock Casino to feature classics like “25, or 6 to 4” and “Saturday In The Park”.

Montreal trio Plants and Animals have been around since 2008, and have gained quite the following in the last few years. With a recently released new album, the band is back in Vancouver this month.

The countdown for one of the city’s first summer festivals is on, and with a stacked line-up. Flying Lotus, Tycho, Of Montreal, Thundercats, White Lung, Hinds, and many more. With day time shows taking place at Malkin Bowl, and evening shows throughout city venues, get your bikes ready and let the summer begin.

When: June 16-19, various times
Where: Various venues
Tickets: Available online from $85. 19+ and all ages (depending on the show)

Detroit’s R&B singer-songwriter and producer JMSN released “It Is” last month, and he’s been on the road since. JMSN’s sound is an addictive blend of mellow electronic, soul, and R&B is a soundtrack to summer, and his show at the Alexander is the perfect intimate venue to hear it.

Flight of the Conchords

When our favourite New Zealand duo announced a North American tour, fans were almost in disbelief. Their first tour in years brings them to Vancouver for one sold-out date, and probably most anticipated June concert/comedy show mix.

When: Thursday, June 23 at 8 p.m.
Where: The Orpheum Theatre, 601 Smithe Street, Vancouver
Tickets: Sold out.

Vancouver, you know you’d better watch out because Ms. Lauryn Hill will tear the roof off of the Queen Elizabeth Theatre on June 26. The singer is as unpredictable as she is talented so there’s no telling what she’ll have in store for her Vancity fans. Ms. Hill has sold tens of millions of albums worldwide and has taken home eight Grammy Awards including one for Album of the Year.

Sarah McLachlan will perform in Vancouver this month as part of the 31st annual Vancouver International Jazz Festival. It seems fitting that this year’s edition will feature several female headliners, as McLachlan pioneered that idea with her own Lilith Fair almost 20 years ago. Expect McLachlan to play classic hits and songs from her latest album Shine On.

K guys, Meat Loaf is actually on tour. The American singer who would do anything for love, but won’t do “that”, is stopping into Vancouver as part of his North American tour to promote his upcoming release Braver Than We Are.

If you ever needed proof that good things come in threes, the Queen Elizabeth Theatre is set to host a performance by an incredibly talented and diverse trio of musicians. Case/Lang/Veirs came about when k.d. lang sent Neko Case and Laura Veirs an email suggesting the three of them collaborate together. The ladies got to work in a studio in Veirs’ dining room and the result, an album called case/lang/veirs, hits stores on June 17.

Diana Ross is set to turn Vancouver upside down on June 30 with a concert at the River Rock Casino. In the span of 50 years, the Detroit-born diva has sold millions of albums, won a Grammy Lifetime Achievement Award, and has been an inspiration to drag queens the world over. Expect to hear hits like “I’m Coming Out” and “Love Hangover”.