He’s an Oscar winner, a billionaire, and was knighted by Queen Elizabeth II, but to scores of Vancouver Beatles fans, Sir Paul McCartney will always be known as “the cute one”. Macca played the first of two sold-out concerts at Rogers Arena Tuesday night, delighting fans young and old with songs and stories from his six decade-long career.

McCartney took the stage just before 8:30 p.m. and told the crowd that he planned to “have a good time here tonight”. Sir Paul immediately made good on his promise, starting the show with a rocking version “A Hard Day’s Night” that had never been performed solo prior to this tour.

And from there, McCartney had us in the palm of his 73 year-old hand for the rest of the night. The rocker played with the intensity of a man half his age and didn’t leave the stage once, not even for a costume change. About six songs in to his three hour performance, McCartney stripped off his jacket and said “that’s the one and only wardrobe change for the evening”. 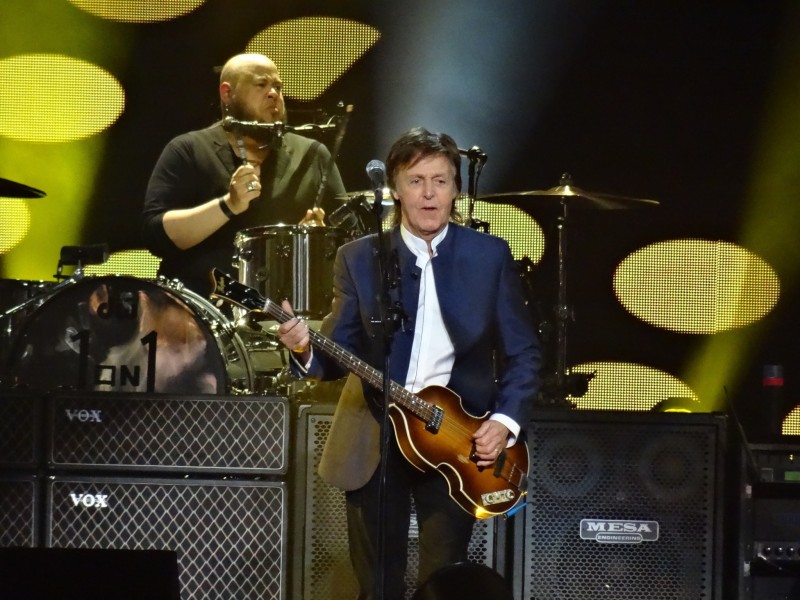 Sir Paul alternated between eras through out the night and every base was pretty much covered. His solo work was represented by a few tracks from New, the 2013 album he recorded at London’s Abbey Road Studios. Also new was “FourFiveSeconds”, McCartney’s superstar collaboration with Rihanna and Kanye West. But best of all was a stunning version of “Maybe I’m Amazed” that Paul sang as a tribute to his late wife Linda.

McCartney dedicated “1985” to “the Wings fans!” while making the band’s famous “W” signal with his hands, and the singer was elated when the crowd flashed the signal back. The Wings fans were also treated to “Band On The Run” and an insane version of “Live and Let Die” that featured fireworks and pyrotechnics. The newly-reunited Guns N’ Roses performed “Live and Let Die” at Coachella last weekend but Axl’s version doesn’t hold a candle to Paul’s (but to be fair, it’s hard to hold a candle in the cold November Rain). 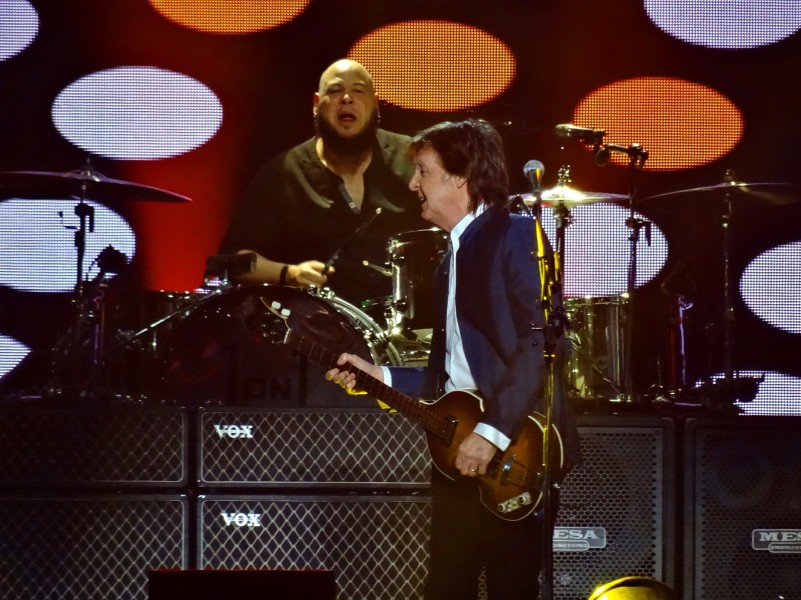 And then there the were the Beatles songs.

Everyone remembers where they were the first time they heard a Beatles song. For some, it was in 1964 when the band made their American television debut on the Ed Sullivan Show but for others, it was last night at Rogers Arena. I saw many tiny Beatles fans being carried into the venue by their parents and grandparents, and even saw one little tyke fall asleep while McCartney sang a somber version of “Blackbird”.

“Hey Jude”, “Lady Madonna”, and “Yesterday” all made the setlist, and McCartney’s beautiful rendition of “Let It Be” shook the arena to its core.

And with great Beatles songs come great Beatles stories, and McCartney nicely filled the gaps between songs with hilarious anecdotes. After playing a few chords of Jimi Hendrix’s “Foxy Lady”, McCartney told us about meeting the guitar player in London “before he broke it big”.

“We had just released, on a Friday, Sgt. Pepper’s Lonely Hearts Club Band, and two days later he opened his show with it,” said Paul. According to Paul, Hendrix’s guitar went “wildly out of tune” during the performance and he began searching the crowd for help. “He’s standing there and he doesn’t know what to do, and he says ‘is Eric out there?’ He was looking for Eric Clapton! And Eric’s in the audience but he’s having none of it. So Jimi looks at me and says ‘will you come up here and tune this, man?'” 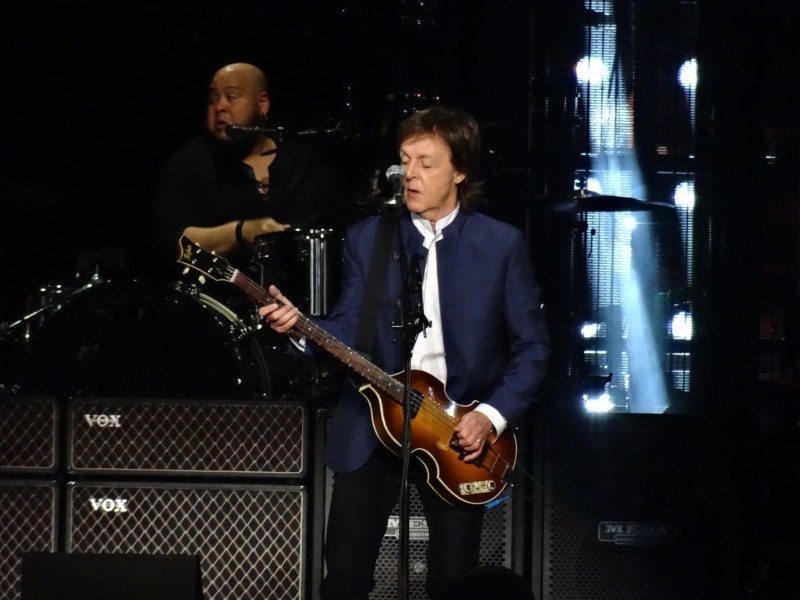 After “Back In The U.S.S.R.”, McCartney told us that he’d “always wanted to go to the U.S.S.R., if for nothing else just to sing that song to them”. He explained that the Beatles were the first rock & roll band to ever play Red Square and that he’d met Russia’s Defense Minister backstage after the show.

“He comes up to me and says ‘Paul. First record I ever bought was “Love Me Do”‘. And this other guy comes up and says ‘we learned to speak English from Beatles records.’ And he looks me right in the eye and says ‘Hello. Goodbye.'”

McCartney took several moments during the show to acknowledge fallen comrades John Lennon and George Harrison. Paul said that he wrote “Here Today” after the death of his “dear friend John” and called the song a “conversation we didn’t get to have”. Then, after a lovely version of “Something”, McCartney said that he and George would often gather at George’s house to play the song together on dueling ukuleles.

Legendary Beatles producer George Martin got a shout out during “Love Me Do”. The prolific hitmaker passed away in March and Paul remembered him as a “lovely guy” and a “great man to work with”. 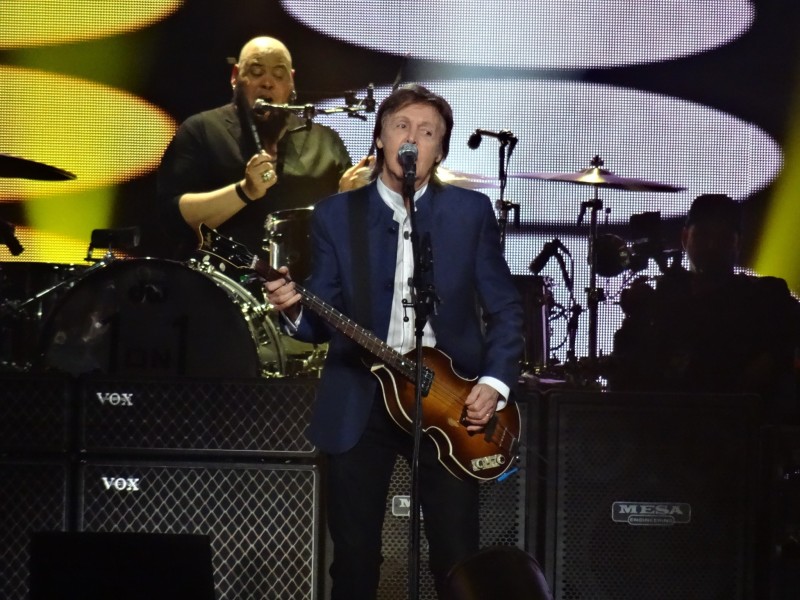 A couple of hometown heroes made surprise visits during McCartney’s set. The Delta Police Pipe Band joined the singer on stage for “Mull of Kintyre”, and Diana Krall teamed up with McCartney for “My Valentine”. He introduced the jazz legend as “a hometown girl who will play piano for us”, and Krall’s husband Elvis Costello was spotted in the audience jamming to their sweet duet.

Sir Paul wrapped up the evening with a one-two punch of “Carry That Weight” and “The End”, and exited stage left to a massive, ear-splitting round of cheers. It’s a testament to McCartney’s longevity and phenomenal talent that, despite not having a hit record in years, he can elicit louder screams from a Vancouver audience than Justin Bieber did in the same venue in March.

Paul McCartney’s One on One tour plays Rogers Arena again tonight, and tickets are completely sold out.