Cocktails At Pam’s is unadulterated fluff in the best sense. Strong performances within the mix of 1960s caricatures ensure that you will stay entertained throughout the 70-minute, no-intermission production.

Containing 11 actors within a small stage is no easy feat for director Stephen Heatley and set designer Lauchlin Johnston. I was always torn: take in the action, or miss out on the corresponding reactions? It wasn’t a bad dilemma to have, since playwright Stewart Lemoine inserts more than a few long, awkward pauses for dramatic effect. Most of them involved chugging some alcoholic drink or another – this is not a play that is shy with its vices.

It was impressive to observe the cast, many just a few years out of school. The script did well in giving each character his or her standout moment: the divorcee’s speech on a hated appetizer topping; the blasé intensity of the well-to-do doctor; the resigned yet good-natured husband. This was an era of excesses, all of which Pam tries to contain in the rigid confines of her living room. The play’s success ultimately relies on the strength of the distraught hostess, and Maryanne Renzetti delivers a believable performance, especially when things get a little surreal. 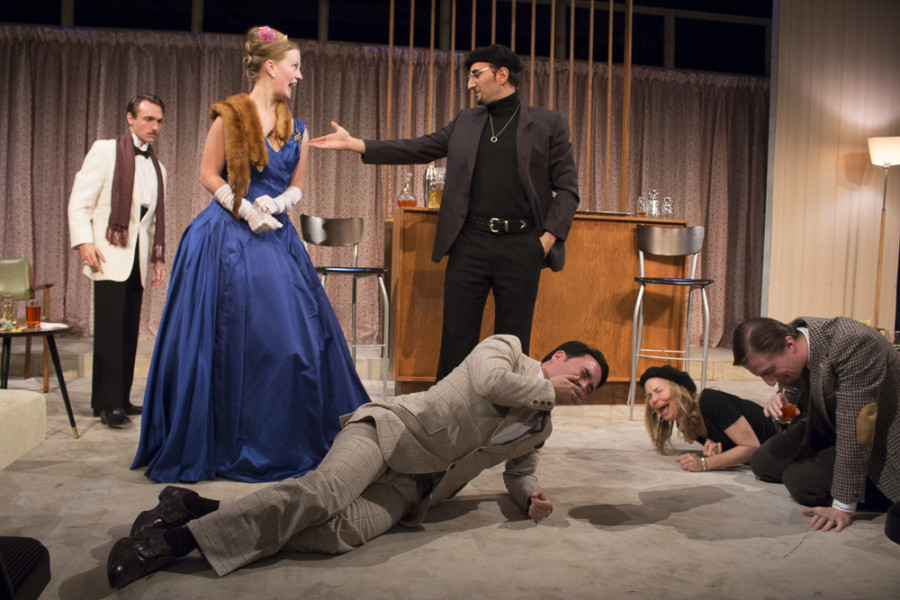 In this type of ‘chick flick’ production, the difference is keenly felt on the details, and Cocktails does not disappoint. Heatley mentioned a Mad Men influence in our earlier interview, and I could definitely see hints within the custom-built furniture and objects d’art depicting the era. The costumes were also on point, each complementing the personality and social stature of individual.

The most riveting piece of theatre you’ll see in Vancouver this year? Probably not. A thoroughly entertaining romp of witty rejoinders and high energy performances? Most definitely, and you’ll come out of the experience laughing.

Cocktails at Pam’s runs until November 30 at Studio 1398 on Granville Island. You can purchase advance tickets here.