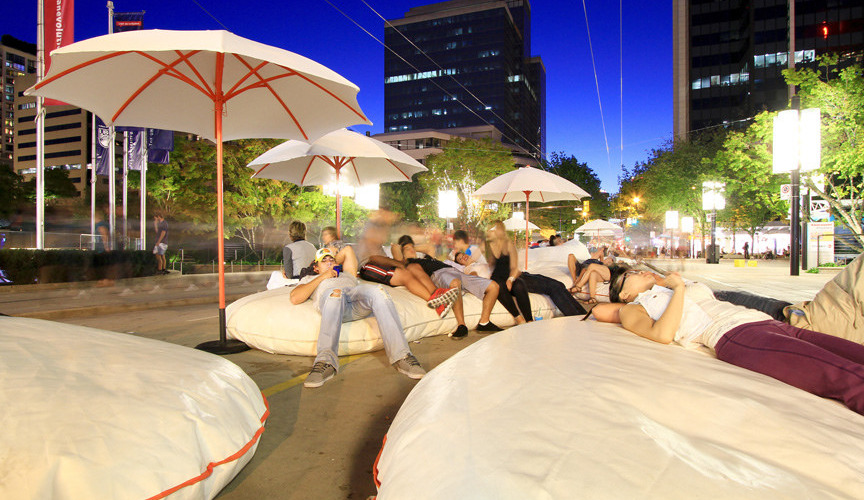 The 800-block of Robson Street between Hornby and Howe streets in downtown Vancouver could be permanently closed to turn the span of road into a pedestrianized public space.

A two-lane roadway of Robson Street cuts through Robson Square, which is a major focal point and gathering place in the region. This span of Robson Street is one of the route’s highest foot traffic locations.

“City staff are preparing a report that will go to Council later this month that will make recommendations about the 800-block of Robson Street,” Dhaneva Panday, a spokesperson for the City, told Vancity Buzz. “Further details will be available when the report goes before Council.”

It remains unclear whether a proposed plan for a year-round closure would include any retrofit work that would reconfigure the street specifically for non-vehicle, pedestrian use. Robson Square, including the road surface, was last renovated just in time for the 2010 Olympics.

In the past, there have been calls to close the road to turn it into a plaza space programmable for events, but this idea has met opposition from local residents in the West End who depend on the No. 5 bus trolley route.

Each summer since 2011, beginning just before Canada Day and until Labour Day, the 800 block of Robson is shut down to traffic and turned into a temporary plaza space through the municipal government’s VIVA Vancouver program. This centres on the program’s Robson Redux competition of inviting local and international designers and architects to submit their vision of transforming the urban space for pedestrians to use.

To accommodate the seasonal closure of the city block for Robson Redux, the No. 5 bus route is detoured to Burrard Street and West Pender instead of making its usual direct path.

In 2014, TransLink announced that it was studying rerouting options for downtown Vancouver’s bus routes, with consideration being given to the possibility of permanent road closures at the 800-block of Robson and the 600-block of Cambie Street – the site of the new Vancouver Art Gallery at Larwill Park.

If the 800-block of Robson Street is closed, it would fulfill Arthur Erickson’s original vision for the Robson Square, courthouse, and Art Gallery precinct.

The late architect originally envisioned a fully-pedestrianized space without any vehicles running through it. However, buses were allowed following the completion, and so were other vehicles later on.

Concurrently, the municipal government is in the process of finalizing the plans to rebuild the North Plaza of the Vancouver Art Gallery city block facing West Georgia Street.