Was Christy Clark just being cheeky, or did she go too far?

This tweet referring to the public’s response to the closure of the Burrard Bridge for International Yoga Day came from her official account today: 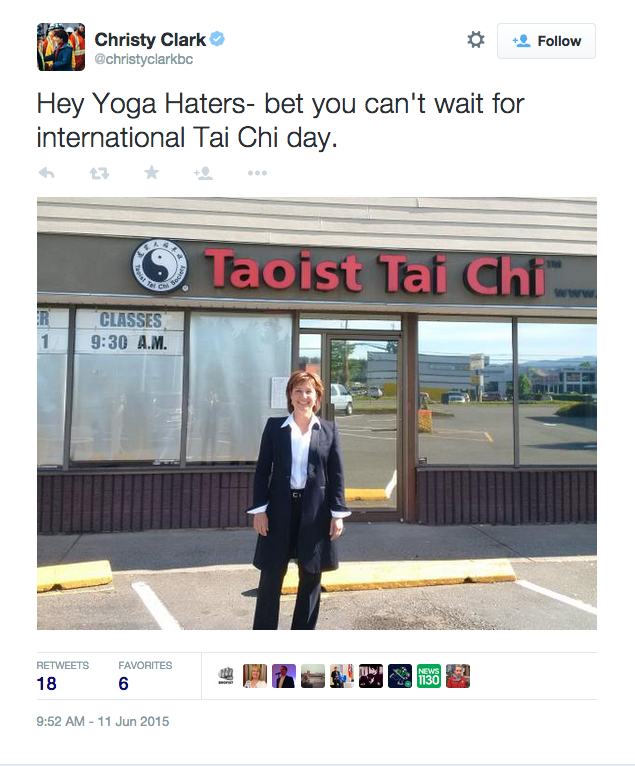 @christyclarkbc I was sure this was some sort of parody account. Whichever staffer wrote this tweet should be fired. #BCpoli

@christyclarkbc are you serious right now? Our premier showing all the maturity of a 12 year old.

Clark has come under fire recently for her decision to shut down the Burrard Bridge to make way for a giant yoga class. The event will cost taxpayers $150,000.

UPDATE: In a press conference today, Clark addressed the tweet and the accusations that she was ignoring National Aboriginal Day in lieu of International Yoga Day:

“That was a bit of humour, a bit of self-deprecating humour.

We are celebrating National Aboriginal Day, absolutely we are. We’re also celebrating Father’s Day, in my household, and we’re also celebrating the United Nations day that was designated for International Yoga Day. Thousands of people practice yoga in British Columbia and find real peace in it. I don’t know what better day to celebrate that and honour it than the day that the United Nations has set that cities and countries around the world will also be observing. So it’s a busy day, no question about it… I think that there’s room for all three and we will certainly be making sure that we are going to be a part of honouring First Nations, their contributions to our communities and our commitment to make sure First Nations are full participants and beneficiaries of our resource economy in the province that’s been a central part of our government’s agenda from the very beginning, and we’re going to mark that on National Aboriginal Day.”

So was the Premier’s tweet appropriate? You be the judge.