With an approval rating of 31 per cent, a new poll by Angus Reid ranks Premier Christy Clark as Canada’s third least popular premier.

Clark’s approval rating is statistically unchanged, down just three points compared to the survey performed in the last quarter. Since September 2014, her approval rating typically fluctuates between 30 per cent and 34 per cent.

The stable job performance rating follows B.C.’s healthy economic outlook. The province is anticipated to lead the nation in economic growth this year, with some of B.C.’s diversified sectors benefiting from the low Canadian loonie.

The Premier of Canada’s westernmost province only ranked higher than two other provincial premiers. Ontario Premier Kathleen Wynne’s approval rating slid to 27 per cent, down from 39 per cent in December 2014, amid the controversy over selling Hydro One and unrest in the public school system. Manitoba Premier Greg Selinger is the nation’s least popular premier with an approval rating of only 19 per cent. He faces an election in April.

With Alberta Premier Rachel Notley, her approval rating has plummeted since May 2015 when the Alberta NDP swept the polls, ending 44 years of Progressive Conservative party rule. Notley’s falling approval rating, from 53 per cent in June 2015 to 33 per cent this month, coincides with the province’s worsening recession.

The steep fall in oil prices has affected all sectors of Alberta’s economy, causing rising unemployment and mounting layoffs.

On the flip side, Saskatchewan Premier Brad Wall is Canada’s most popular premier and the only premier to have a majority approval rating. 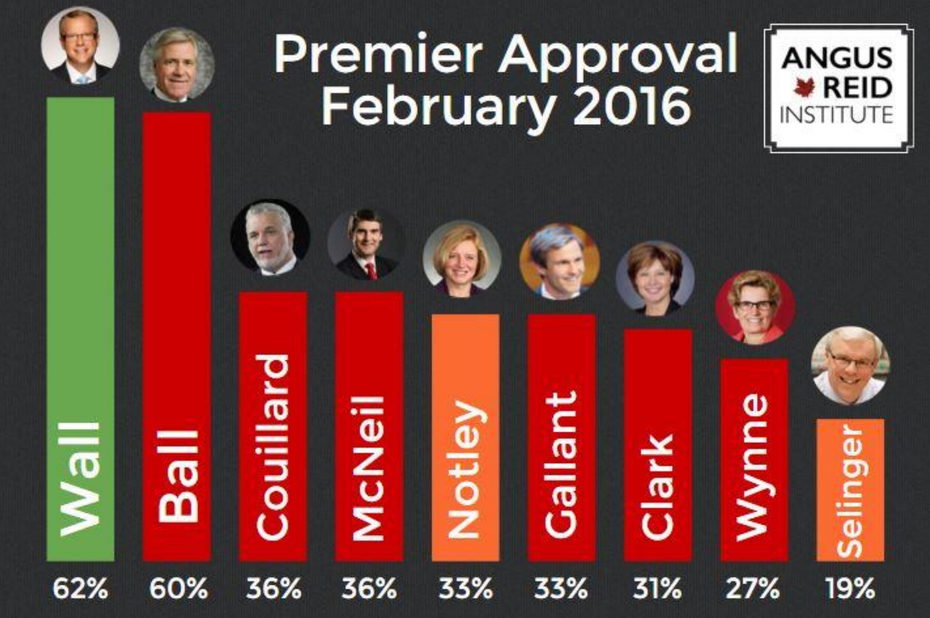