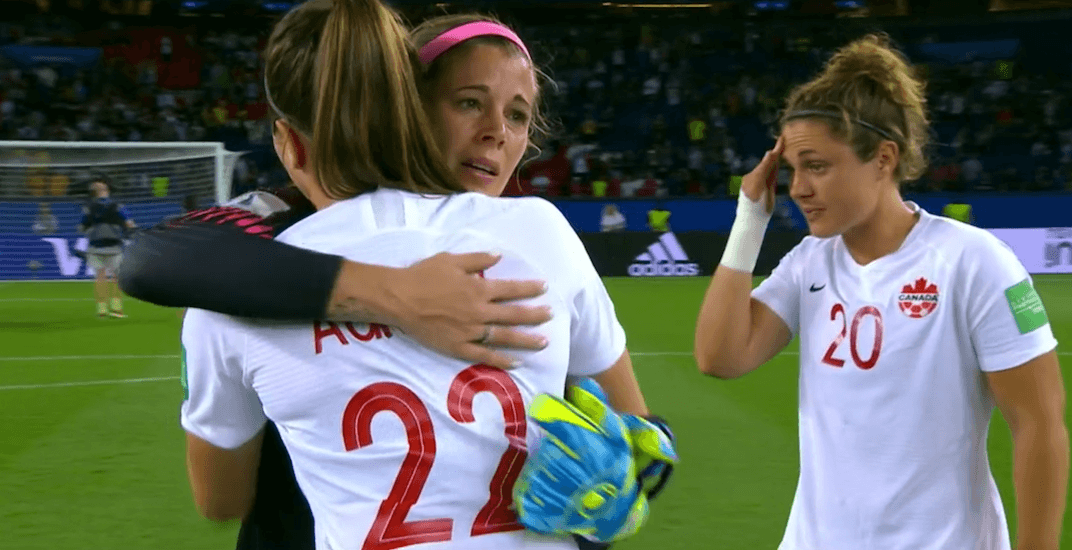 Canada’s run at the 2019 FIFA Women’s World Cup has come to a halt.

In what is likely the final World Cup of Christine Sinclair’s tremendous career, Canada has been eliminated in the Round of 16 in Paris.

After finishing second to the Netherlands in Group E, Canada (world No. 5) drew Group F runner-up Sweden (No. 9) in the Round of 16.

After a relatively uneventful first half, Sweden’s Stina Blackstenius scored the game’s first goal in the 55th minute.

The goal was the result of a pair of poor reads by the Canadians, first by centre back Kadeisha Buchanan, then by goalkeeper Stephanie Labbe.

Stina Blackstenius outraces #CAN to the ball and gets #SWE on the board first 😬 #FIFAWWC pic.twitter.com/sOslei676j

Canada got a great chance to level the match in the 69th minute, when they were awarded a penalty after a handball by a Swedish defender in the box. The handball initially went undetected, but was awarded after the referee consulted with VAR.

So Christine Sinclair stepped up to the spot and tied the match, right?

To the surprise of many, it was 24-year-old Janine Beckie who took the shot for Canada. She failed to score.

#CAN draws the PK, but no luck for Janine Beckie. #FIFAWCC pic.twitter.com/2VYnB0b5lc

Beckie, it should be said, is a competent goalscorer in her own right. You’d expect her to score in that situation, and she delivered a good hard shot on target. Unfortunately, the Swedish goalkeeper guessed right, diving to her right and getting a glove on the ball.

Despite the competence of Beckie’s attempt, how Canada could not select the 36-year-old Sinclair – who is two goals away from tying the all-time international goals record of 184 – seems mind-numbing.

The decision to select Beckie was not made by Canada’s head coach Kenneth Heiner-Moller, who instead allows his players to talk among themselves to decide on a penalty taker. It was Sinclair who chose Beckie.

“Christine actually asked me if I wanted to take it,” Beckie confirmed in her post-match interview with TSN’s Laura Diakun.

Beckie was heartbroken, saying “that’ll stay with me for a long time,” though she felt she did all she could on the shot.

“I’m confident in my penalty, I thought I hit it really well, I thought she made a really good save,” she said. “It’s the big moments, those are the moments that you live for.

“You get all the glory if it goes in and you take the blame, it feels like, when you miss.”

Winners of Olympic bronze medals in 2012 and 2016, the World Cup has proven to be a more difficult beast for Canada. They were eliminated in the quarter-final as hosts four years ago, and didn’t make it out of their group in 2011. Canada’s best-ever finish was fourth-place, back in 2003.