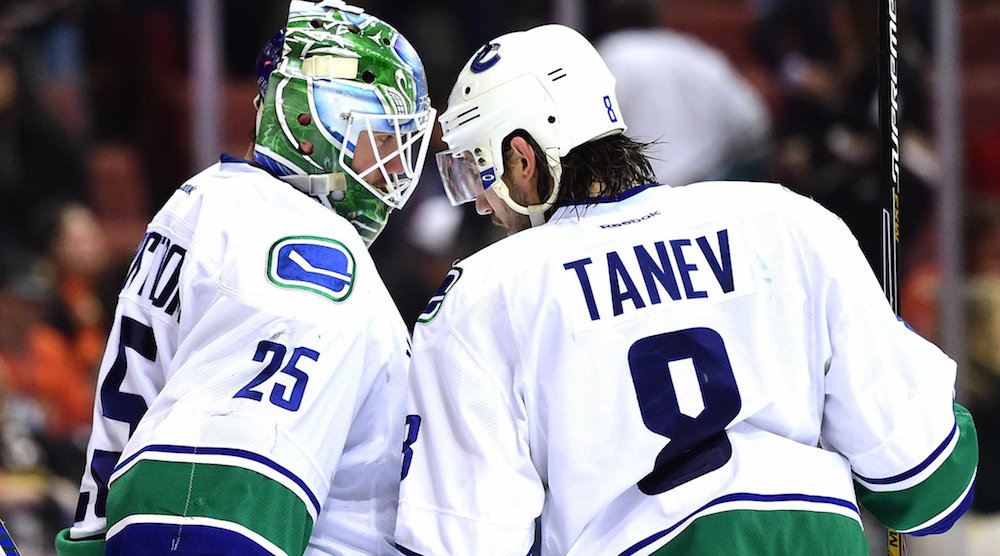 Remember the good old days, five days ago, when the Canucks were sitting pretty on top of the NHL with a 4-0-0 record? We knew it wouldn’t last, but it was fun to see the Canucks surprise some teams early on, damn it.

Even after they were beaten for the first time on Saturday against the Kings, in many ways it felt like a win. They were outplayed, but they were able to come back from a 3-0 deficit to get a point after losing in a shootout.

Before Sunday’s game against the Anaheim Ducks, they had nine of a possible 10 points through five games. That’s very good. Two nights later, after a loss to the Ducks and a much more concerning 3-0 loss to the Ottawa Senators, fans are feeling as gloomy as the Vancouver weather lately.

He was seen in a walking boot at Rogers Arena on Wednesday. Apparently he was hurt when he got tangled up with the Kings’ Anze Kopitar on Saturday, and shouldn’t have played on Sunday.

Other players out with injuries right now include Alex Burrows, Derek Dorsett, and Anton Rodin.

The Canucks now have Zalewski and Jayson Megna up with the big club, begging the question: why aren’t they snapping someone up off waivers?

Emerson Etem, who just was ahead of both players on the depth chart just over two weeks ago, was recently placed on waivers by the Anaheim Ducks. As an added bonus, if the Canucks were the only team to claim him, they’d be able to throw him to Utica without him having to clear waivers.

Nobody claimed Etem, so Anaheim can send him to their AHL affiliate.

Also available on waivers is winger Magnus Paajarvi from the St. Louis Blues and defenceman Dylan McIlrath from the New York Rangers. Both have youth, some NHL success, and potential on their side.

Given the injuries Vancouver has sustained up front, it would be a no-risk proposition for the Canucks to grab a forward out of the bargain bin. If it works out, great. If it doesn’t, no biggy.

Most of the time players are on waivers for a very good reason and you won’t gain much by grabbing one.

Jacob Markstrom was on waivers just two years ago. Luckily for the Canucks, nobody snapped him up as he’ll be their starting goaltender next season.

The best waiver wire pickup the Canucks ever had was Martin Gelinas, who they claimed from the Quebec Nordiques when he was only 23 years-old in 1994. He went on to help them during their run to the Cup that spring, as well as eventually scoring 30+ goals in back-to-back seasons.

The Canucks haven’t grabbed anyone off waivers since Brandon McMillan (remember him?) in 2014. Since then, they’ve lost Etem, Adam Cracknell, and Frank Corrado. They’re due to pluck someone.

Other notable waiver pickups by the Canucks in recent years include: Dale Weise (2011) and Tom Sestito (2013).

The Canucks practiced with the exact same lines on Thursday as the ones they used in their 3-0 loss to the Senators.

You’ll notice that you’re still not seeing Nikita Tryamkin, who still hasn’t gotten into a game yet this season.

Both players are young and, reading between the lines, appear to have showed up to training camp in less than ideal physical condition. That’s the type of thing that pisses off management, and isn’t likely to get you any breaks.

With that in mind, doesn’t a demotion to Utica accomplish both things for Virtanen? Vancouver doesn’t have that luxury with Tryamkin, who could bolt back to Russia if sent back. But if he doesn’t get to play any games, he might bolt at the end of the year anyway.

The Canucks have a pair of tough games coming up to the Edmonton Oilers (don’t laugh, they’re 6-1) on Friday and the Washington Capitals on Saturday.