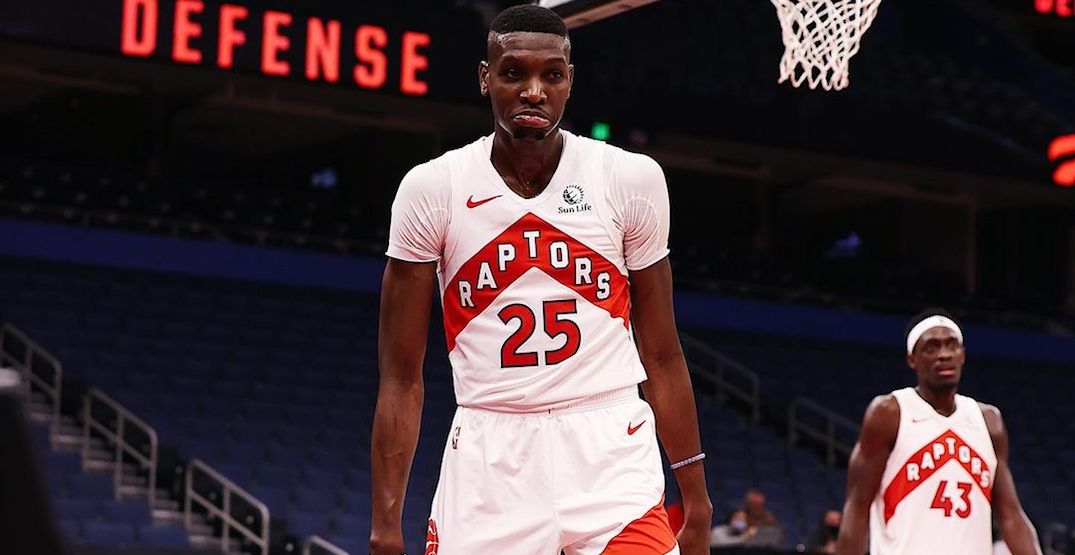 Chris Boucher is starting to turn some heads in the NBA.

The 28-year-old Canadian once again had a productive outing on Thursday, racking up a team-high 25 points, and 10 rebounds as the Toronto Raptors defeated the Charlotte Hornets 111-108.

This marks the fifth game of the season with 20 plus points for Boucher off the bench and people are starting to notice. The 6-foot-10 power forward Boucher is also third in the entire league in blocks per game and shooting an astounding 47% on three-pointers this year.

Boucher’s potential to be a breakout player for the Raptors was there ever since his G-League days where he lead the Raptors 905 to a G-League championship. From there, he was able to get a bench role with the Raptors but with inconsistent minutes.

This season, Boucher is getting around 10 more minutes per game on average than last seas because of the departures of both Marc Gasol and Serge Ibaka in free-agency.

The team had hoped newcomers Aron Baynes and Alex Len would pick up the slack at centre, but instead it has been Boucher who has seen increases in points, rebounds, assists and blocks — all career-highs.

“He’s playing extremely well,” Kyle Lowry said of Boucher post-game. “I think he’s just confident in who he is and who he’s become. It took a while but he’s in a position where he knows he’s gonna play and he knows he has to play on our team to help us.”

Coach Nick Nurse said that while Boucher is playing very well, he sees room for him to become even better.

“I think we gotta be happy about it,” Nurse told reporters. “He is playing really well, and as good as the numbers look, there’s a lot of room for improvement… he’s really close to being a really, really solid defensive player…We just kind of get some more reps at it and I think he’ll continue to improve at that end.”

Reaction on Twitter to Boucher’s play has been very positive and highlights how great he has been.

has anyone ever won 6th Man, Defensive Player of the Year, and Most Improved Player in the same season? asking for nobody in particular, just Chris Boucher.

chris boucher to the rest of the nba pic.twitter.com/UOAte8bfrE

People have also marvelled at the numbers he has put up in comparison to some of the NBA’s best players.

Chris Boucher is averaging 20.7 points on 65.2 percent shooting over the last four games.

Player Efficiency Rating (PER) is not a perfect stat. That said, the top 15 in PER this season:

Boucher said that while he is coming off the bench right now, he doesn’t mind it as long as it helps the team.

“I’m good with the way I am, I’m good with my position, I just want to get better and it’s something I’ve been saying since the first game,” said Boucher. “I’m going to get better throughout the games and figure out ways to help the team.”

For the entirety of Boucher’s NBA career, he has mainly been a bench player but with constant production like what he has produced so far this season, he will not only start for the team but could turn the entire season around.