A Development Application notice outside Chip Wilson’s house has neighbours angry at the lululemon millionaire once again.

Planted on Wilson’s property is a development application sign notifying the neighbourhood of one property owner’s plans to build an 8,000 sq. ft. floating helicopter pad with 10 ft. high pylons just off the coast from 3085 Point Grey Road, Wilson’s address.

“We have received a Development Application form from A. Foolisch Engineering Inc. to develop a fixed position floating heliport dock at the above noted address,” the sign reads.

Claiming the proposed heliport is permitted under the property’s “special family zoning” laws, the proposal is sure to anger nearby residents. Earlier this year, Wilson’s plans for a 2,500 sq. ft. dock near his Sunshine Coast home angered neighbours.

According to the proposal, the new heliport would accommodate friends and business clients flying in to Wilson’s house. The sign also notes that pick up and drop off for the heliport would be at the nearest bus stop. 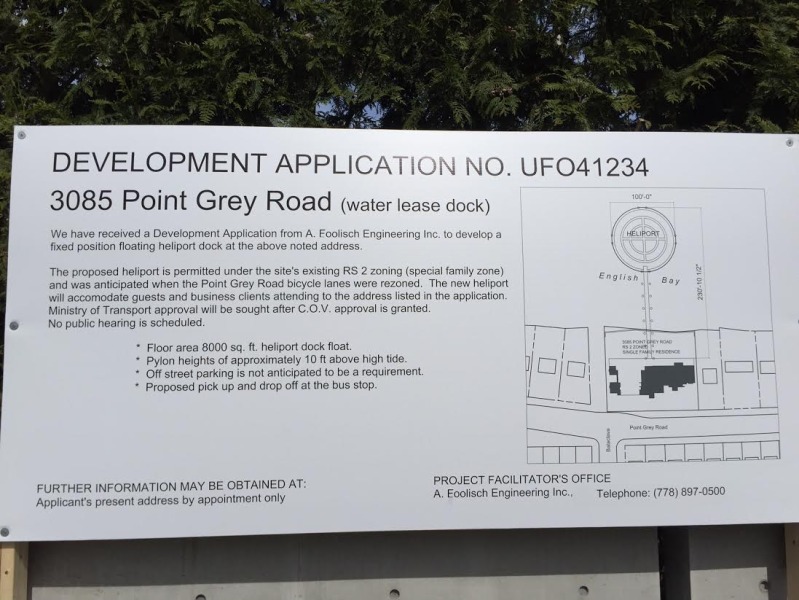 Sweet, sweet irony. If we had you fuming for a minute, you can breath a sigh of relief because the Development Application is all a big April Fools joke from Chip Wilson himself. Just try calling the phone number on the sign and see what happens.