Another Chinese Bites dinner and this is just a week after our last meal. Originally named The One, they changed their English name to Nong due to the existence of a few restaurants in GVRD that are also named The One. 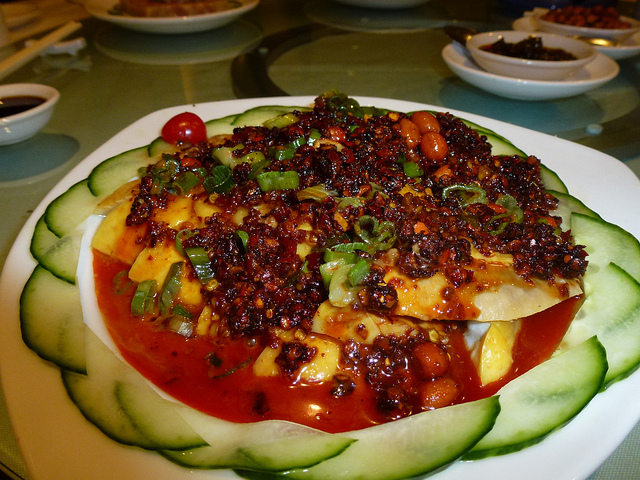 We got four appetizers to start, all served at room temperature. The first is the Chicken in Chilli Sauce. I know this looks fatty and super spicy, but that’s not really the case here. It looks a lot spicier than it actually tasted, and if you’re not a fan of chicken skin, it is easily removable. The meat was steamed to just done, with a bit of pink near the bone. The meat was very juicy and moist. 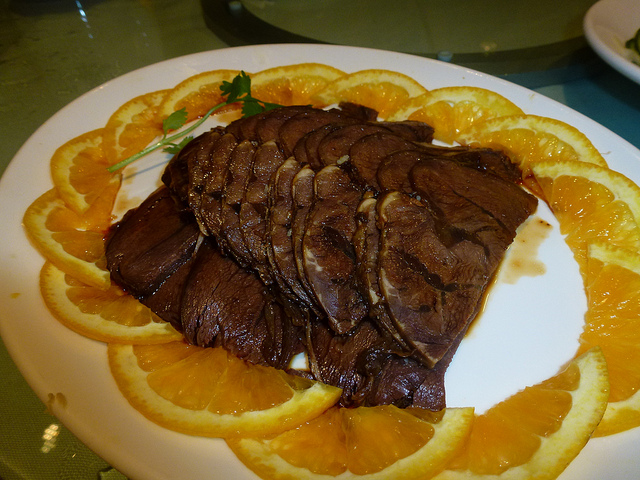 Our next appetizer was the Marinated Beef. It’s a marinated beef shank that has been braised for hours, allowing the connective tissues to break down and become almost gelatinous. The beef takes on the flavours of the marinade, which has hints of five spice, clove, anise and peppercorn. 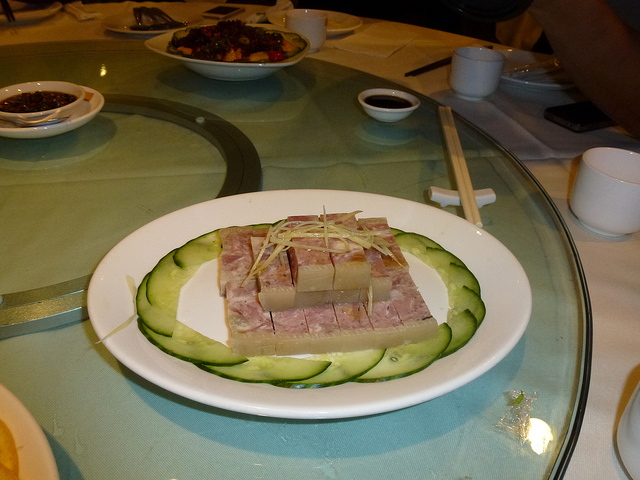 And here we have the Asian version of head cheese, a Jelly Pork dish. This was one of our many pork dishes of the night. Made with pig trotters in a brine which then is pressed and cut. Again, it may appear fatty but the texture of the pork itself is quite lean. The taste is rather mild, so it’s sometimes dipped in vinegar to enhance the flavours. 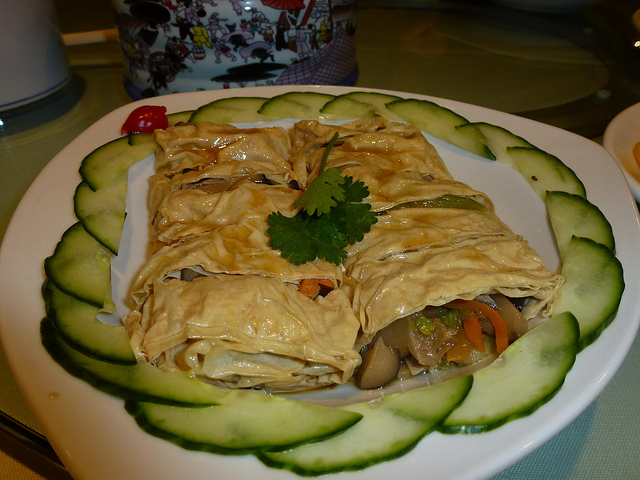 This dish is commonly referred to as Vegetarian Duck , but if you’ve ever eaten duck, you’ll know that this is nothing like duck! Rather, it’s bean curd skin rolled up with assorted marinated vegetables, such as mushroom (for the meaty texture), with some celery & carrots for crunch.

My favourite was the chicken, followed by the beef, I could live without the head cheese and will opt for real duck over this “duck” any day! 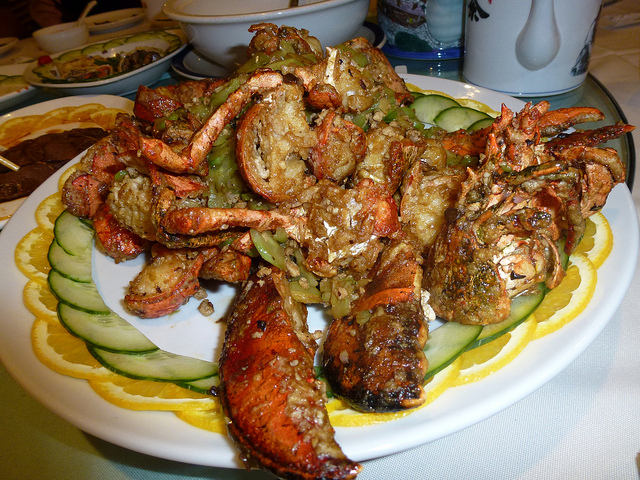 For our seafood dish, we had the Lobster with Bitter Melon and Shredded Pork. The two lobsters were amazing, very sweet and loaded with meat, but the combination of lobster with the melon and ground pork was a bit puzzling. I’m not a fan of bitter melon, more due to the texture than the taste, but I did enjoy the plentiful ground pork. Think of it as a weird surf and turf. 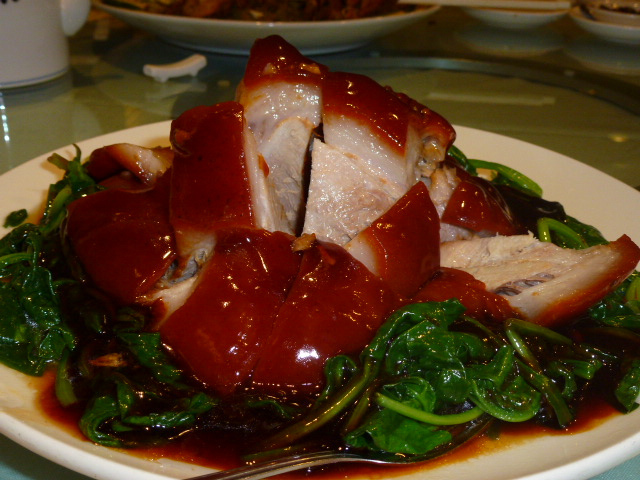 And this was the first of our Pork dishes, the Dong Po Pork Hock. The waitress sliced the Pork Hock opened for us and the pork itself is fairly lean, with a thick layer of fat and skin on top. The meat inside was very moist and had a good saltiness. The sauce on the outside The brown sauce is a blend of mostly of sugar, wine and soy sauce and the pork hock’s natural juices. It ended up being a bit on the sweet side, and didn’t add much to the dish or the vegetables. 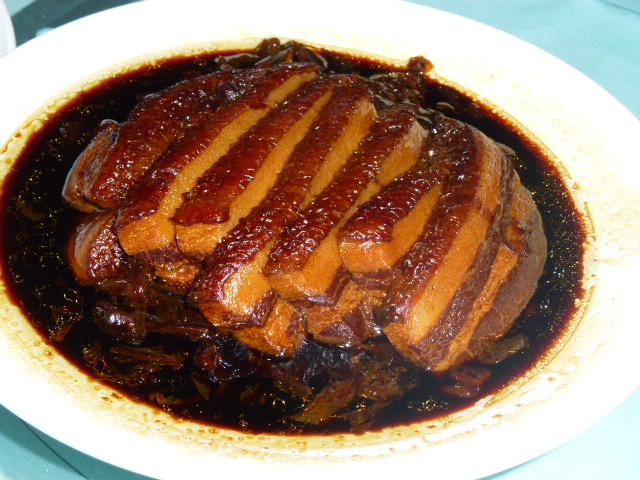 And for the second pork dish of the night, we have a Braised Pork Belly. Again, layer of meat, fat and skin but very different from the Pork Hock. This is quite rich as well but the mustard greens eases the heaviness. Be sure to order some white rice to soak up the sauce. 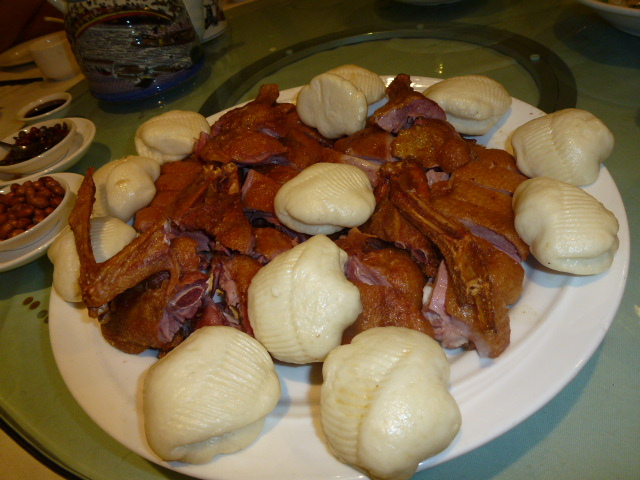 A Signature Dish of Nong is their Tea Smoked Duck. The duck skin was very crispy with a nice smoky and salty flavour. Much of the fat had rendered out due to the smoking process, so all you’re left with is skin and very smoky and lean flesh. Serving it with the buns seemed a bit weird for me, since I enjoyed the duck on its own, but it is reminiscent of Peking Duck and the steamed crepe wrappers. 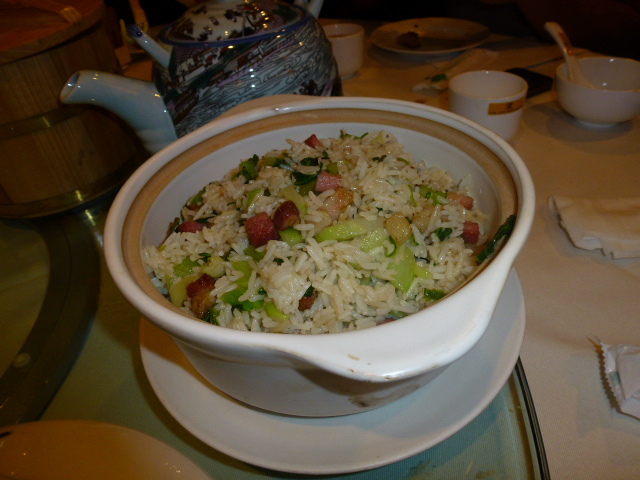 For our final dish, we had a Rice with Vegetable and Salty Pork . The ham and veggies were cut into dices and stir-fried with the rice before it was actually steamed. This resulted in a very tasty dish, with the ham imparting its saltiness onto the rice. The rice was very fluffy and differed from your usual fried rice with its harder rice grains. This was truly comforting way to end the meal. 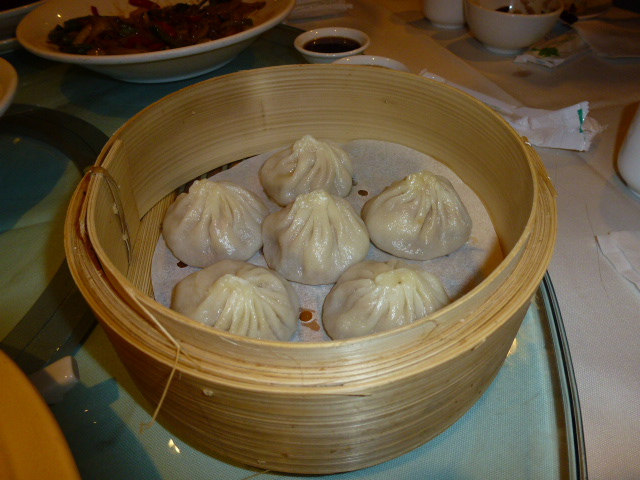 And just when you thought we were dine, they brought out a few servings of their Shanghai Dumplings, aka, Xiao Long Baos. I normally eat this at dim sum (at lunchtime), but lately, it has been appearing at various dinners too. These soup filled pork dumplings were very good, much juicier than I expected and the skin was delicate and not too thick. A very good XLB in my opinion.

Of the many dishes we tried, I would say the Chicken in Chilli Sauce is a good starter, get an order of Xiao Long Baos too. The Lobster dish was good (maybe ask for it without the bitter melon) and  the Braised Pork Belly is worth repeating. The Tea Smoked Duck doesn’t disappoint and the Salty Pork Rice at the end are both good too.