We attended a Chinese Bites dinner at Ken’s Kitchen last month to try some of their Award Winning Signature Dishes. The menu is very eclectic and has dishes ranging from Combination Dinners for a table of 10, some snacks to tied you over until dinner, like Deep Fried Tofu and Chicken Wings. The restaurant has two Chinese Restaurant Award winners, both of which were seafood dishes. 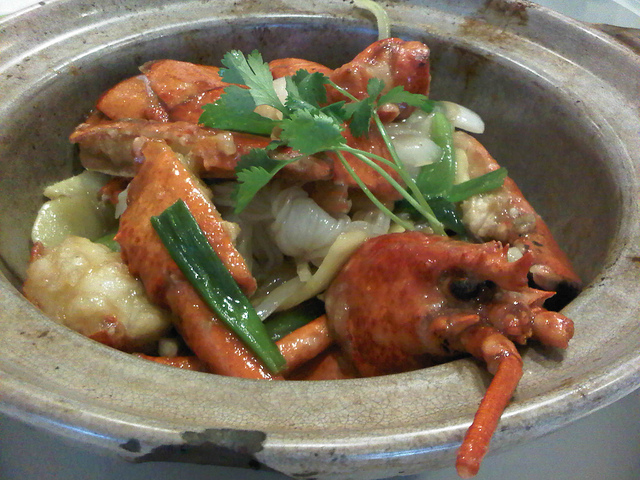 The first one is the Lobster with Konnyaku in Hot Pot. There was lots of meat on the lobster and they made it easy for us to eat by breaking it down for us. The simple ingredients of ginger and green onions really helps to bring out the sweetness of the seafood. The konnyaku is one of those things that is almost impossible to overcook. 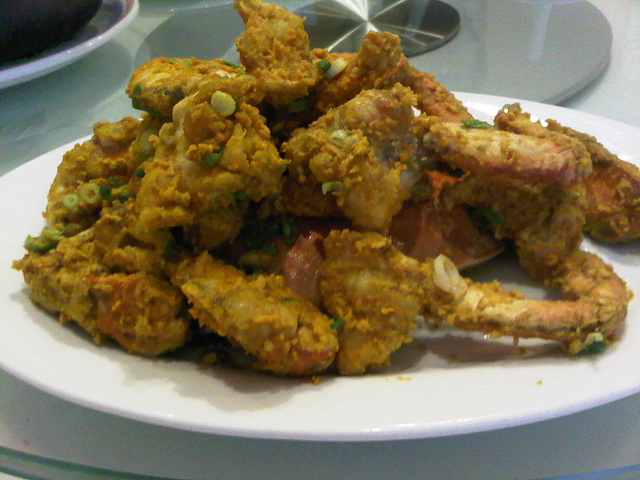 The second award winning dish is the Golden Dungeness Crab. The “golden” in the Golden Crab denotes the use of Chinese Salted Egg as part of the coating. If you’re not accustomed to the pungency of this item, it might be a bit overwhelming. The saltiness of the coating serves to enhance the sweetness of the crab. 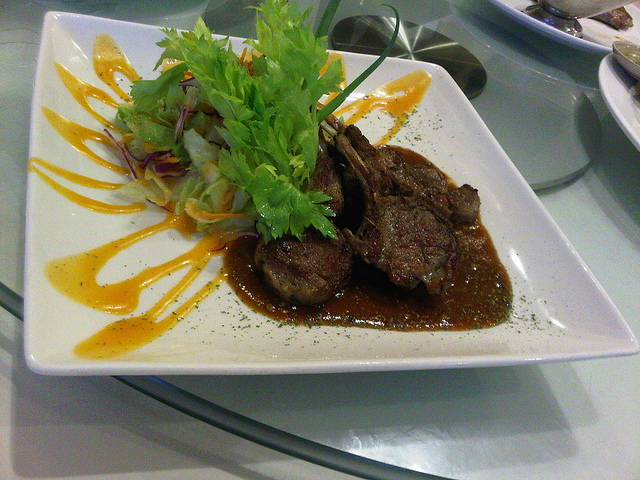 We also tried their Grilled Lamb Chops, marinated and served with a black pepper sauce. The meat was very tender, with a slight cumin or curry flavour. 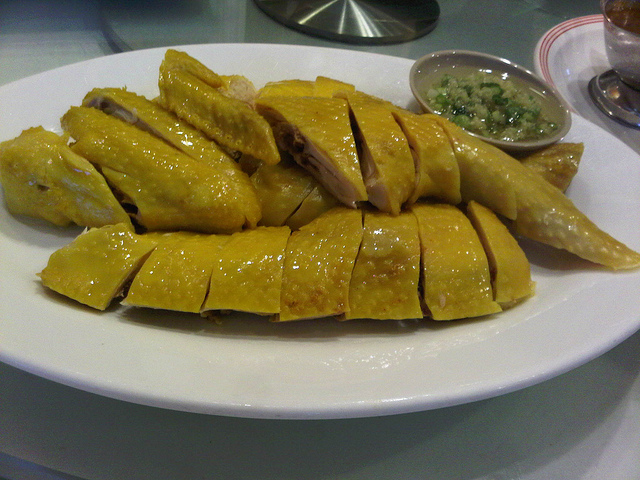 Their Specialty Chicken was next and I loved the ginger and green onion sauce that accompanied it. The chicken has a great sheen with a lovely yellow tinge in the skin. The meat itself was moist and with a thin layer of fat that was there was easy to remove. 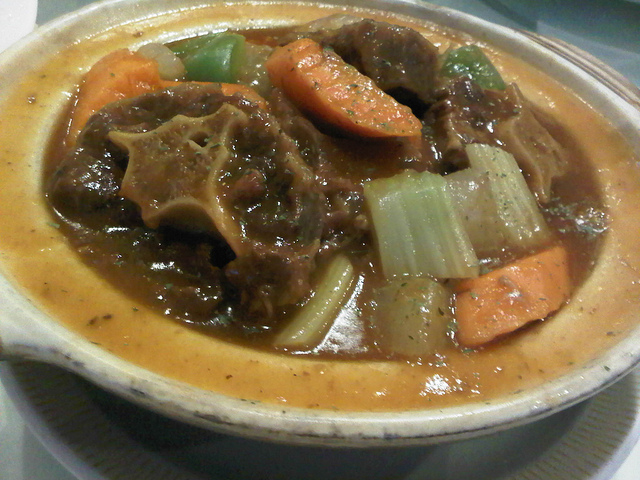 The Braised Oxtail with Daikon was next. The chunky veggies helped to sweeten the ox tail. It would have been nice had the tail pieces been broken down a bit more, but the flavour was definitely there. If you don’t mind using your hands, then this is a good dish to roll up your sleeves for. 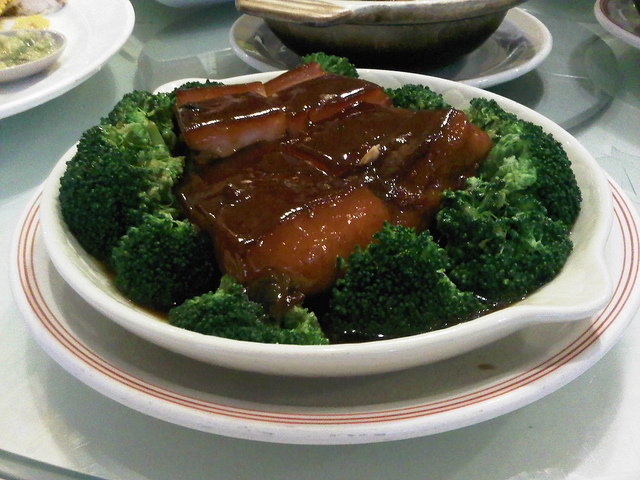 This is the Stewed Pork Belly, which is cooked skin on to keep the meat moist. It’s about 50/50 fat to meat ratio. The fat can be removed from the meat quite easily, so you can decide just how much fat you care to eat. 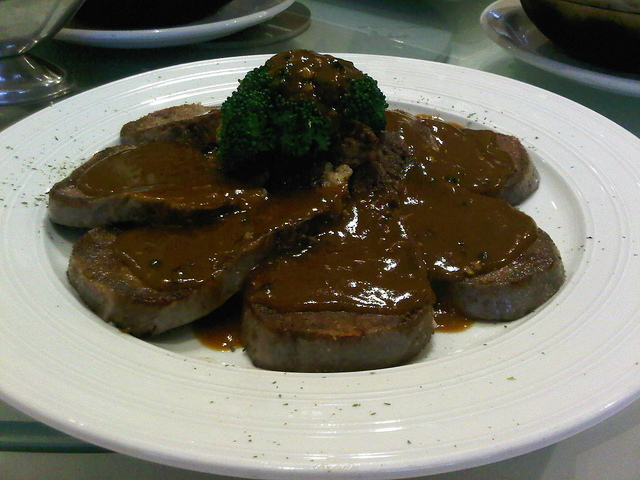 Since we had the Ox Tail, it somehow seemed fitting that we get the Ox Tongue. The sauce was really thick and the tongue could have been braised a bit longer, or sliced a bit thinner. The texture was a bit tough for me, but that could be a personal preference too. 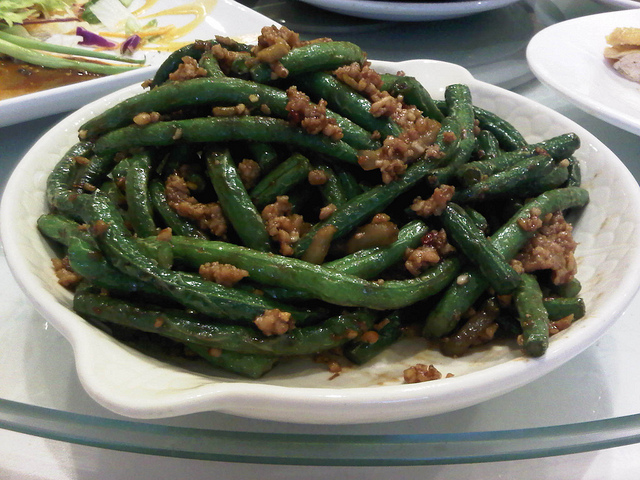 To balance out the overwhelming amount of protein, we also got the Spicy Green Beans. There was a good amount of ground pork in the stir-fry, but the dish was a bit mild, lacking the heat that we were expecting. 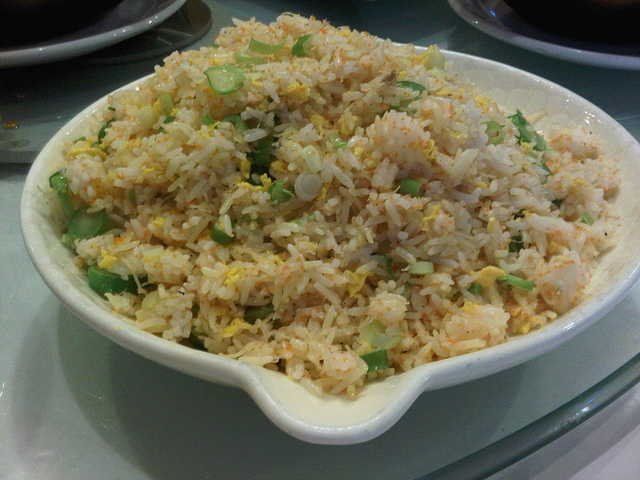 Our last dish was a Fried Rice with Gai Lan, Conpoy and lots of Tobiko. The conpoy gave the rice a nice chewiness, and the egg and tobiko (also egg!) rounded out the dish and gave us a very satisfying end to the lovely meal.