We’re always on the hunt for the cheapest places to fly for a little getaway, but it may surprise you to learn that most of Vancouver’s cheapest flights are to the United States.

CheapFlights.ca released their first annual Compass Report for Vancouver, revealing the city’s most popular and cheapest flying destinations. As it turns out, flying to Calgary will burn a deeper hole in your pocket than a trip to Los Angeles.

Here are the five cheapest flights out of Vancouver, along with their average airfares:

As for the most searched flights in Vancouver, Manila in the Philippines tops the list with an average price of nearly $1,000. Trailing behind is Hong Kong at $843 and Los Angeles at $307.

Here’s a complete list of the top 25 most searched flights from Vancouver, ordered from cheapest to most expensive: 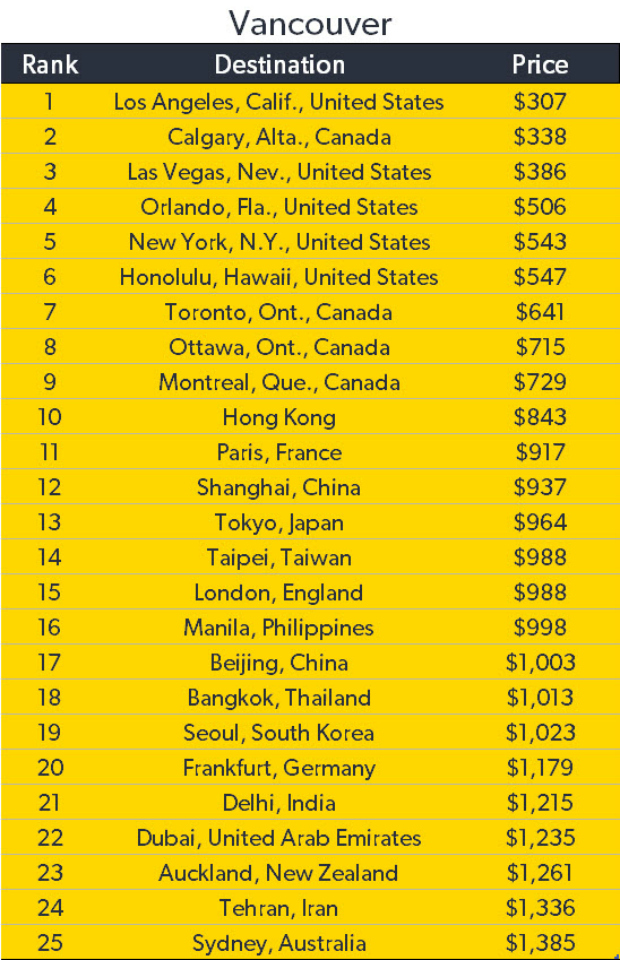 Nationally, the cheapest flights are still largely concentrated in the United States, with New York City taking the top spot. Sadly, flying to Australia will still cost you a pretty penny here in Canada – the average flight there will set you back $1,735, more than Sri Lanka, Indonesia, and South Africa.

The most searched flights by Canadians were Manila, Philippines, Vancouver, and Los Angeles.

And if you want to fly to an exotic destination, here are some fun facts that might help you plan your trip: