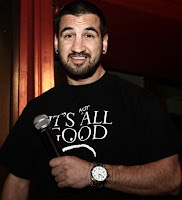 On August 15th, 2010 local comedian and LOL Promoter Donovan Mahoney became a finalist for the People’s Champ annual comedy awards awarded to Vancouver’s favourite comedian. I checked out the event last Thursday at the Kingston and wow what a hilarious night. There are some great amateur comedians in this town! Mahoney has announced that if he wins, he will donate 10 percent of his prize earnings to charity Habitat for Humanity.
Mahoney was originally ousted from the competition but decided to compete for a wildcard re-entry spot. Not only did Mahoney impress the audience enough to rejoin the competition, after three subsequent performances he was selected to be a finalist.
As it was his first attempt at the competition, Mahoney was originally quite nervous.
“I felt like my jokes weren’t working and I just wasn’t connecting with the audience the first time I was in the competition” says Mahoney. “But since I won the wildcard spot, I felt like I really had something to bring to the table and the audience and I were really feeling each other. You should have seen the reaction to my cat jokes!”
While Mahoney may enjoy joking about cats, dating and bad haircuts one thing he’s serious about is giving back to his community. This year, Mahoney has raised over $3000 for charities including Habitat and the BC Cancer Society. If Mahoney wins the People’s Champ competition it will bring more credibility and notice as a local stand-up artist. More importantly though, it will give him the chance to give a shout-out and a donation to a charity he believes in.
Mahoney’s charitable initiatives are also helping to attract a new audience to stand-up comedy in Vancouver. Stand-up comedy can be vulgar, brash and hard to stomach. Mahoney wants to improve the image of Vancouver’s stand-up scene and one way he is doing this is by attracting Vancouverites to his show who like comedy but are also interested in helping support a worthy cause.
Even if he’s not voted People’s Champ, Mahoney will continue supporting local comedy and charity through his Laugh out Loud Production company’s stand-up shows.
VancityBuzz.com