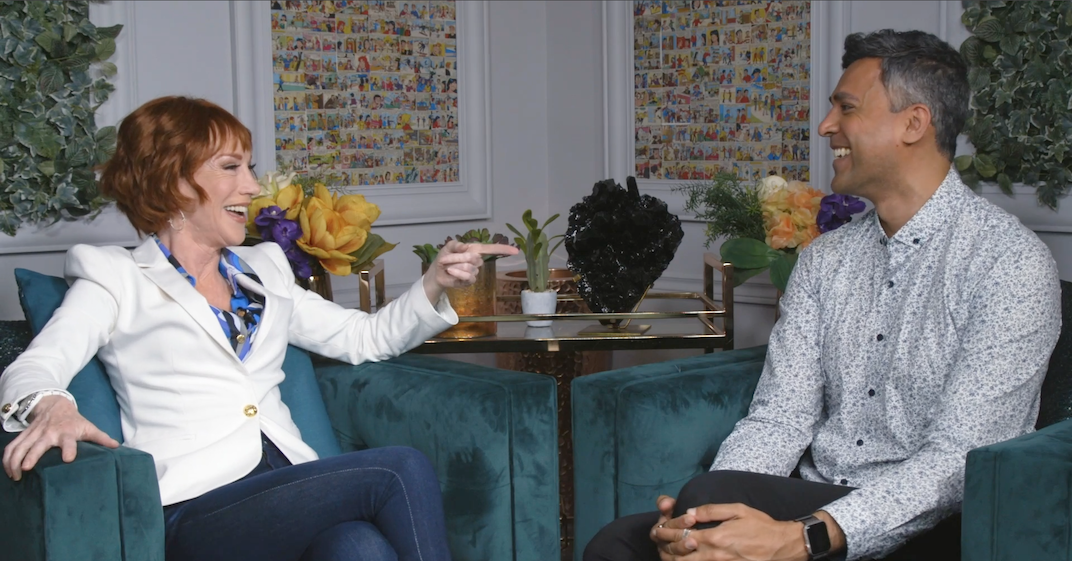 Kathy Griffin is an Emmy and Grammy award-winning comedian, and holds the Guinness World Record for most stand-up comedy specials (she’s done over 20). However, for the past year she’s been more well-known for a photo in which she holds up a mask in the likeness of a certain president.

She’s been doing the media circuit in support of her tour, but this is an honest, deep-dive into the backlash of that photo and its professional and personal repercussions. She explains why she offered a apology, but then took it back, shares stories about her mentor Joan Rivers, and which celebrities supported and which ones abandoned her during the controversy. Finally, Kathy has some advice for aspiring stand-up comics and artists about finding – and sticking with – your voice.

Or Watch it here:

Kathy Griffin’s comedy has always been edgy. She’s never been one to hold back – and she’s not about to start now.

“I don’t necessarily think it’s the best time to be a safe comedian,” she says. “I do believe there’s room for every kind of comedian. Personally, this is the only kind of comedian I know how to be.”

On her current tour, aptly called the “Laugh Your Head Off Tour”, Kathy speaks candidly about what she went through, and isn’t afraid to push the boundaries of comedy: “I cross the line, then I move it, and then I try to cross it again”.

In this interview, Kathy reveals the weirdest thing in ex-neighbours Kim & Kanye’s house, the advice she received from Jim Carrey on the day the photo went viral, and who she’s endorsing for the 2020 presidential election.

On the way to the show with the pups!

Buy tickets for the Laugh Your Head Off Tour on KathyGriffin.com