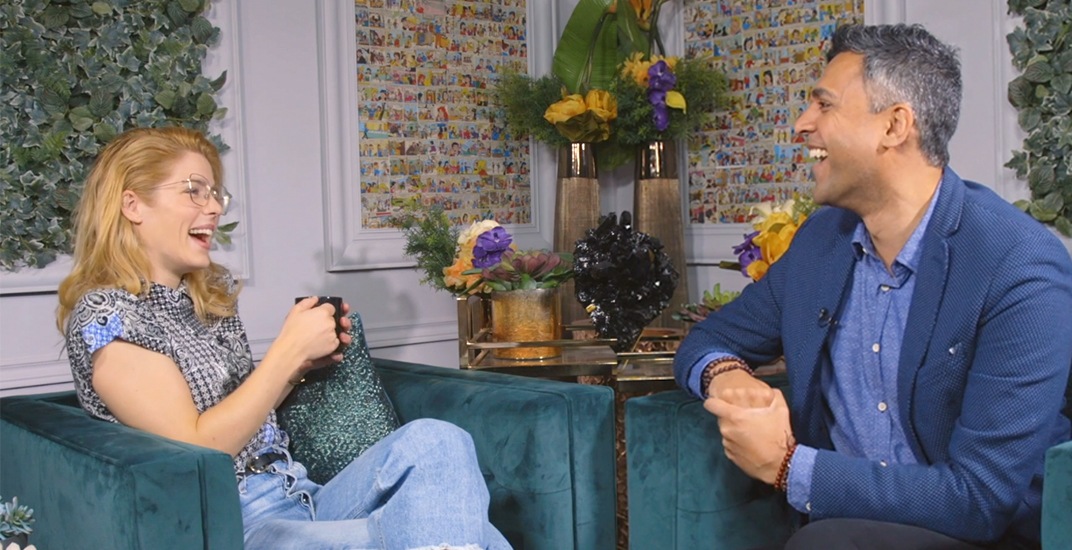 Emily Bett Rickards is known for playing the brilliant Felicity Smoak on the CW show Arrow (or maybe even as the bride in Nickelback’s 2009 music video for “Never Gonna Be Alone,” if you’re looking for a deeper cut). Until June 29th, you’ll be able to see her in Vancouver at the Orpheum Annex on Granville Street, starring in Reborning.

The Vancouver actress biked over to our studio to discuss her new play, being wary of #Olicity on social media, and finally responds to Stephen Amell’s tweet about her on-set couch.

As some Arrow fans may know, Emily Bett Rickards’ role on the show grew from a one episode guest spot to a series regular.

“I was just feeling so fortunate to have a day of work that wasn’t at the dog shop I was working at!’ she laughs. “The show was so new and she was only written for that one episode, those 2 scenes we did at the CBC radio station. It was a good day!”

While she loves working on the show, Emily admits that there are elements of theatre acting that she misses, like character work and script analysis.

“I think that’s just such a wonderful creation and something I miss from the last period of my life,” she says. “I haven’t been able to obsess with people over script analysis and text, and it’s been really fun.”

In Reborning, Emily stars as Kelly, a “reborn doll artist” who creates custom-made, realistic baby dolls. “She’s a little nuts,” she laughs, “but I kinda wanted to remind myself how much I loved acting, and I wanted to see if that would do this for me, and it really has.”

In this interview, Emily shares her favourite places to work out in Vancouver, what she’s learned about acting on Arrow, and how she feels about having her own action figure.

I grew up in Vancouver going to the theatre and starving for more, so to say I’m honoured to be a part of this project in my home town would be an understatement. Reality Curve asked me to join them for REBORNING last year and we have finally found some time to bring it to life. JUNE. It’s creepy and cool and quick, weird, and fun. I can not wait. There’s an indigogo link in my bio if you want to get involved! Hope you can come see our flash run production of Zayd Dohrns weird masterpiece.