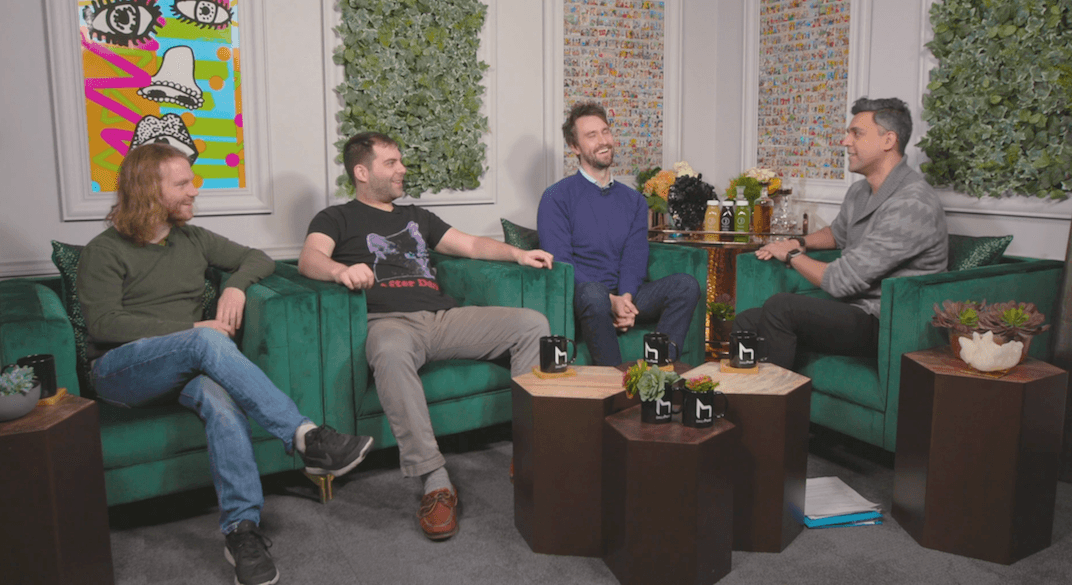 While some people may be able to say they have their ‘dream job,’ not many people can boast about creating their own dream jobs.

Jake Weisman and Matt Ingebretson are two-thirds of the comedic trio behind Comedy Central’s Corporate, a satirical dark comedy about working at a “soulless” multi-national corporation. Along with co-creator and series director Pat Bishop, these funny friends sat down in our studio to discuss working in comedy, their past (odd) jobs, and how to know when to quit.

As with many comedy groups, Jake, Matt, and Pat met doing standup in Los Angeles.

“When you start doing standup anywhere, it’s hell,” Matt says. “You’re doing it in dive bars, it’s a total nightmare. And so when you meet people that have a similar sense of humour as you, it’s a miracle.”

“You cling to them like they’re a life raft!” Jake adds.

While they love what they do, these funny fellas admit that it’s very hard work.

The trick to good writing, they reveal, is to be brutally honest with yourself, and revise enough until you’re happy with your work – and if you can, find someone to collaborate with.

“Collaborating is like working out with a gym buddy,” Matt says.

“And as you can see,” Matt says stoically, “we’re ripped.”

In this interview, the gentlemen of Corporate compare writing to boxing, get candid about living together (“I’ve seen Jake in a robe a lot of times”), and reveal the secret to their series’ success.

“I’ve slept with every president of every network, and our ratings are fine,” Jake says, matter-of-factly. “I’m very hot.”

Watch full episodes of Corporate on Much in Canada, or Comedy Central in the U.S.

Chaotic Creative will be LIVE at Just for Laughs Montreal! Get tickets and more information here.