Before Michelle Kwan, Joannie Rochette and Katarina Witt, there was Karen Magnussen. 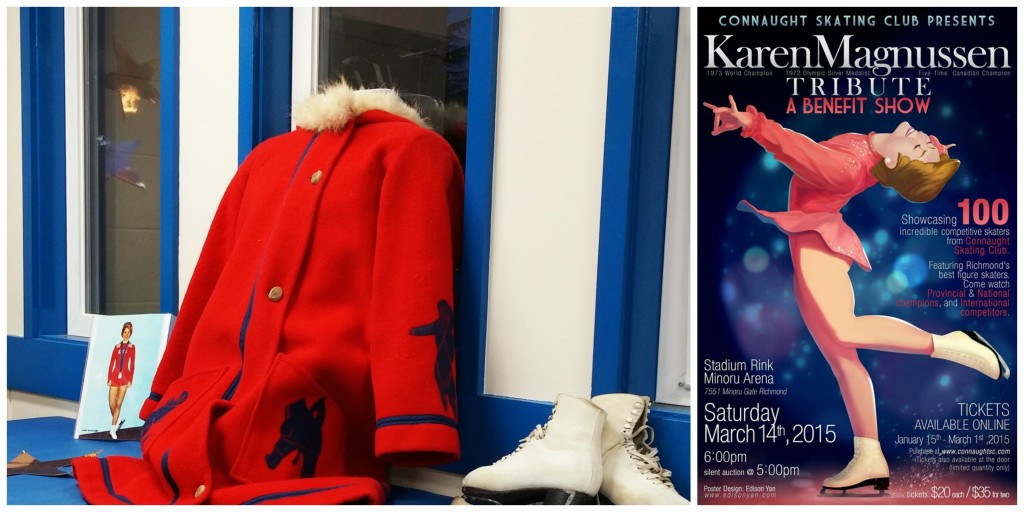 On display at Connaught Skating Club is the Olympic team jacket and figure skates that Karen Magnussen wore in 1973 at the World Figure Skating Championships.

Richmond’s Connaught Skating Club will be hosting their biannual skating show fundraiser this year on March 14 at Minoru Arena. The recipient of the proceeds from this year’s show will be five-time national figure skating champion Karen Magnussen.

The Vancouver-born Magnussen rose to prominence in the late 1960s, and was one of the dominant ladies’ figure skaters of the early 1970s. In 1972, she won the silver medal at the Winter Olympics in Sapporo, Japan. In 1973, she became the last Canadian woman to become the world champion in her sport. The striking athletic blonde with the Twiggy-esque pixie cut became a national hero, sporting superstar and the dream girl to a generation of female athletes.

A long and successful skating career followed, as Magnussen headlined Ice Capades for several years before becoming a full-time coach. After a decade teaching in Boston, she and her family returned to Vancouver, where she coached at the North Shore Winter Club until 2011. Magnussen was one of the torch bearers for the 2010 Winter Olympics, a particularly special honour as the Games were held in her hometown.

In 2011, tragedy struck. When ammonia leaked at the North Shore Winter Club’s rink, Magnussen ushered all her students – many of whom were young children – out of the rink to safety. The last to leave the building, Magnussen’s lungs were badly damaged. It turns out that the North Shore Winter Club was non-compliant and had failed numerous Occupational Health & Safety inspections over a sustained eight-month period of time prior to the incident, which was proven in a CBC report last year.

Magnussen is no longer able to work or skate, and is deprived of the sport she has lived and breathed her whole life. WorkSafeBC has so far denied her benefits, and she is still fighting her case today. For this reason, the Connaught Skating Club selected her as the beneficiary of this year’s show. 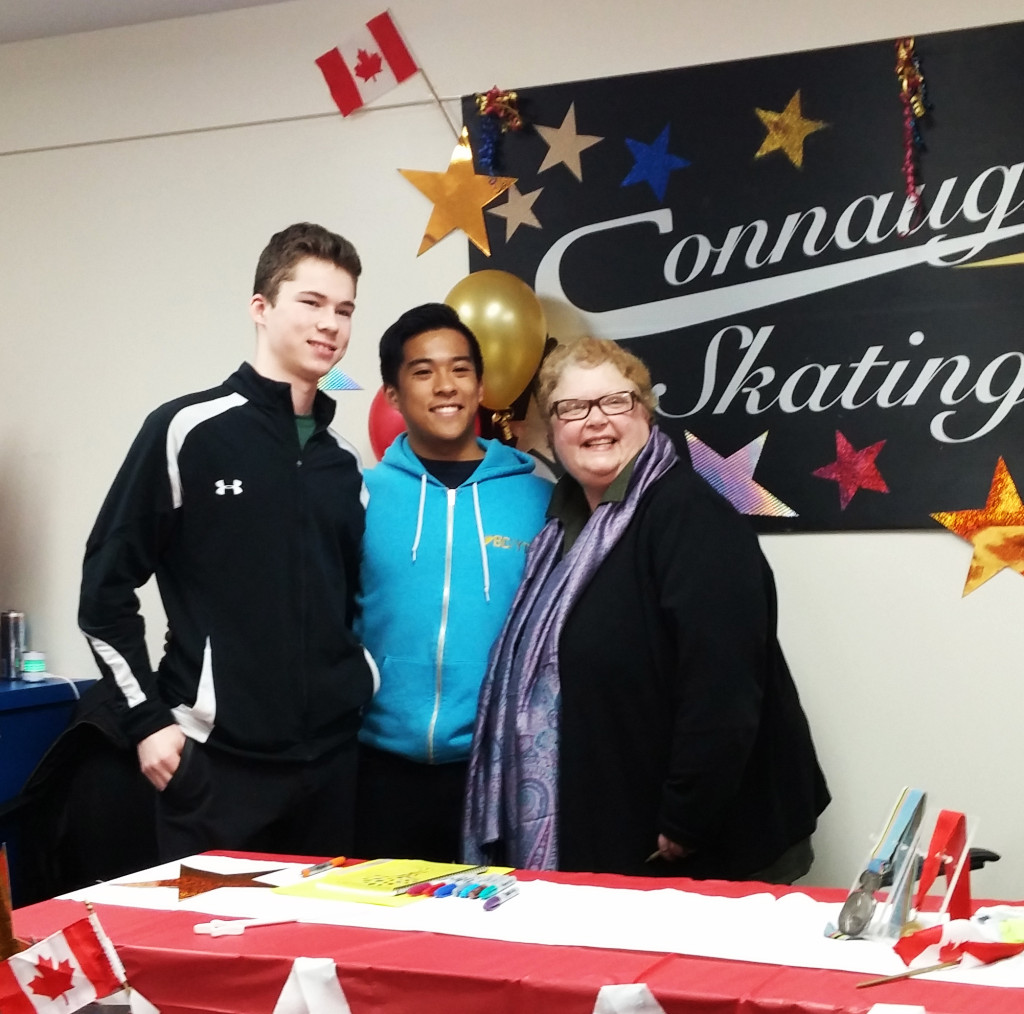 On February 10, Connaught hosted a public meet-and-greet for Magnussen. Well over 100 aspiring young skaters were at Minoru Arena while Magnussen signed autographs, greeted the students and sold copies of her family’s new cookbook. Despite her poor health, Magnussen arrived at  to conduct media interviews and spent several hours meeting and greeting her fans. Her mother, aged 87 but who still plays tennis regularly despite a hip replacement, was with her. 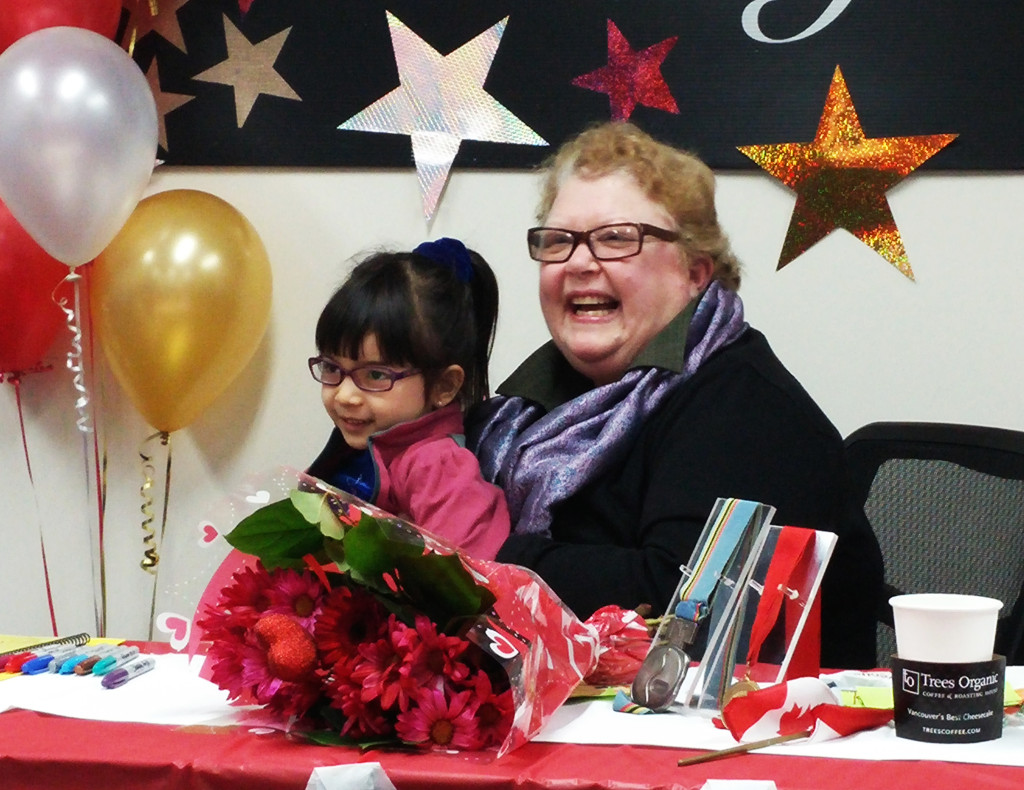 Karen Magnussen with one of her young fans.

Magnussen was primed for success at a young age. Born into a family of athletes, from age 7 she worked on getting higher jumps by practicing her Axels and Lutzes in the backyard while wearing ski boots to practice jumps. Her mother told us that she also enrolled the young Karen in ballet for her posture, and diving to get an extra spring in her jumps. Her passion and drive from a young age were evident.

“You don’t notice you’re on the ice for eight hours a day,” Magnussen said of her ambition. A typical day consisted of early morning practice from 5 to 8 a.m., a full day at school, more practice and homework until bedtime. As massage therapists were not readily available at the time, Magnussen’s father, who recently passed away, often used a combination of winter green and olive oil to massage her legs as physiotherapy. As a competitive athlete, she always considered herself as part of “Team Magnussen,” which consisted of her, her mother and former coach Linda Brauckmann, who had the stern disposition to rival even the most terrifyingly stereotypical Russian figure skating coach.

Magnussen can still feel the effects of the 2011 incident at the North Shore Winter Club today. Her vocal cords and her lungs are still damaged, she was unable to breathe properly for eight months, and she now takes the powerful immunosuppressant drug Prednisone as a last resort, “because you can’t cough 24/7.” The side effects are profound, as they result in weight gain, various forms of arthritis, constant fatigue, depression and debilitating joint pain, amongst others. “No one’s accountable, that’s the shame of it all,” Magnussen said. The North Shore Winter Club has, since Magnussen is no longer coaching there, shuttered its figure skating program.

Despite the events of the last four years, Magnussen gave great advice for aspiring skaters. To one young athlete at the meet-and-greet, she recommended keeping a journal. “We are our own worst critics,” she said, and no matter how badly a day on the ice goes, by keeping a journal an athlete can always reflect and realize, “I didn’t do too badly.” Great advice from a true champion.

Get more information on the Karen Magnussen Tribute – A Benefit Show and purchase tickets to the show on March 14, 2015.