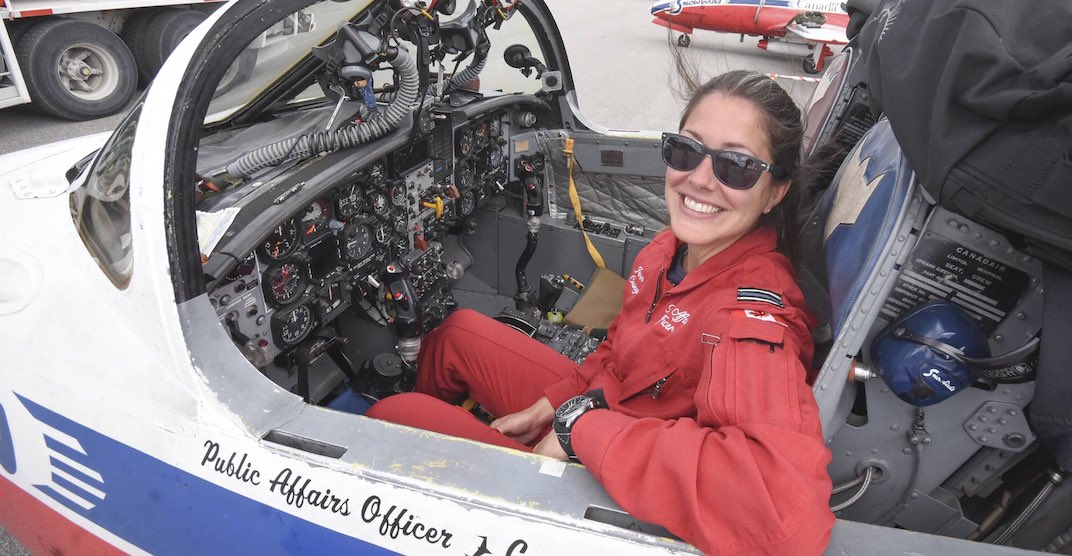 Following Sunday’s tragic death of Captain Jennifer Casey, a Canadian Forces Snowbird member, the CF Snowbirds have shared a touching statement on behalf of her family.

Captain Casey passed away after a plane crash in Kamloops, British Columbia. The Snowbirds were touring across the interior of BC as part of Operation Inspiration, a cross-Canada tour to increase morale during the COVID-19 pandemic.

Her family said that she was “always one for adventure” and that Operation Inspiration “seemed to be designed for her.”

“Her beautiful smile and positively infectious personality could brighten anyone’s day and she proudly served the mission as she flew across our great nation with a team that she adored, the Snowbirds,” said the family.

Prior to joining the Canadian Armed Forces as a Public Affairs Officer, she began her career as a journalist in Halifax at News 95.7.

Here is the family’s full statement:

“Captain Jennifer Casey, our beloved daughter lost her life on Sunday, May 17 in Kamloops, British Columbia while supporting an important mission that seemed to be designed for her. Operation INSPIRATION is a mission with one focus, making Canadians happy in a time of uncertainty and there was no better person in this world to carry out that mission than Jenn. Her beautiful smile and positively infectious personality could brighten anyone’s day and she proudly served the mission as she flew across our great nation with a team that she adored, the Snowbirds.

Jennifer was more than a granddaughter, daughter, sister, and friend to many, she was a story teller, a role that she embraced with passion and skill. She was also a proud Nova Scotian that served as an advocate and ambassador for her province wherever she went. Her journey took her many places but her heart was always at home in Halifax.

It was in Halifax where Jenn studied Journalism at the University of Kings College and started her career in journalism with the Roger’s network at News 95.7 where she developed her story telling skills, giving a voice to local causes and community groups that often didn’t have one. Working with News 95.7 is where she built her enormous network of friends that have spent the last several days sharing kind words about her professionalism and beautiful character. Now they are telling her story.

Always one for an adventure, Jenn joined the Canadian Armed Forces in 2014 as a Public Affairs Officer where she thrived personally and professionally. While serving her country, Jenn traveled around the world meeting new friends at every stop along the way. Using her experience and media connections, Jenn was great at telling the stories of the brave men and women that serve Canada at home and abroad. She was committed always to honing her skills and advancing her education in the field by completing a Master of Interdisciplinary Studies from Royal Roads University in B.C.

Many say that the military is much like a second family and Jenn welcomed these brothers and sisters with open arms and all her heart. There are many groups in her military family that are sharing in her loss. First and foremost, we are sharing this loss with the Public Affairs Branch, a group of communications professionals that introduced Jenn to her military family. We also share this loss with everyone in the Royal Canadian Air Force, a group of loving individuals that will always remember Jenn for the contributions that she made to the team.

And finally, we share her loss with the Canadian Forces Snowbirds, 431 Air Demonstration Squadron, a team that she proudly served in a job she truly loved. Our hearts are with all of you at this time as we mourn the loss of Jenn and remember all of the memories we shared with her.

As she makes her way back to Nova Scotia to her final resting place, we ask those that knew and loved Jenn to cherish the memories that you have of her and continue to bask in the light that she shone on everyone’s life. She is gone but will never be forgotten.

Captain Jennifer Casey, we salute you.”