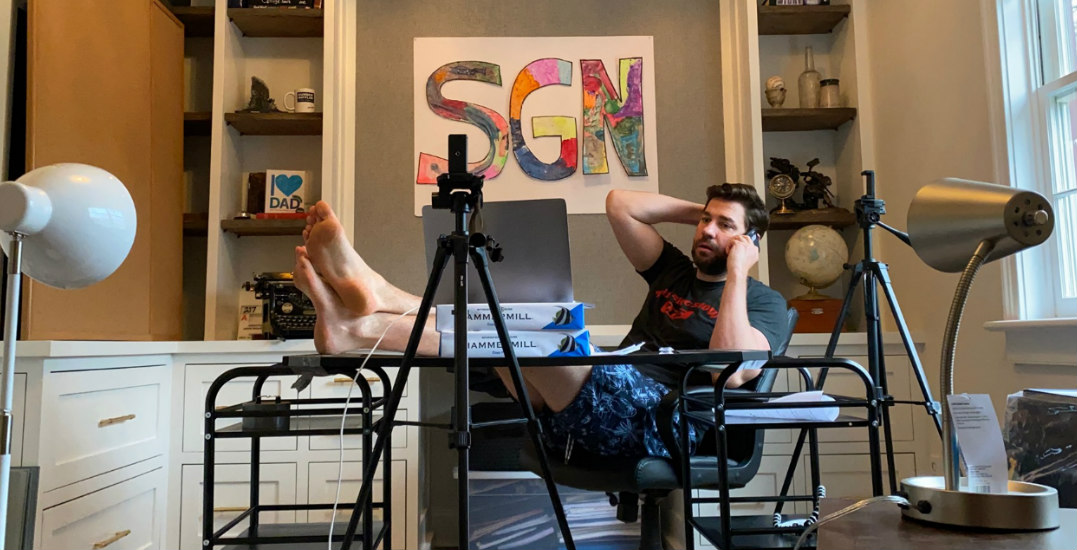 From live group meditations with Lizzo, to Lin-Manuel Miranda busting out Broadway hits from a bedroom, to Antoni Porowski giving us Quar Eye cooking tips on IGTV, some of the biggest names in Hollywood have been giving us what we need recently — some good quality entertainment.

Whether you’re looking for comic relief from Seth Meyers’ attic, some words of wisdom from Oprah, or some much-needed positivity from Miley, here’s a list of some new A+ entertainment we can watch while we all sit this out.

Just because we’re on lockdown, who said we can’t still “go to” a comedy show on the weekend? Catch some of the biggest names in comedy from the comfort of your couch at Comedy Gives Back Laugh Aid live stream this Saturday, April 4 at 4 pm PST/7 pm EST.

Iliza Shlesinger, Ray Romano, Howie Mandel, Nikki Glaser, Bill Burr, Marc Maron, and Patton Oswalt will be putting on a four-hour live stream of pure comedy gold. When was the last time you got to see so many talents at once, and for free?!

In a bid to “stay lit during dark times,” country-pop star Miley Cyrus is spreading positivity with her daily talk show “Bright Minded: Live With Miley“. Cyrus started the talk show to share good news and helpful advice in a time where bad news is everywhere.

Catch Miley interviewing some of the biggest celebs around, including Demi Lovato, Hailey Bieber, and Alicia Keys, live on her Instagram account every weekday at 11:30 am PST/2:30 pm EST. Who better to brighten your day than smiley Miley?

Already run out of The Office re-runs during quarantine? We have great news for you (or should we say “Some Good News“). John Krasinski AKA Jim has turned to YouTube with a new show where he shares positive news from his home office.

You’ll find a hand-drawn logo from his children, guests including Michael Scott himself, and of course, the good news from around the world that we all need. 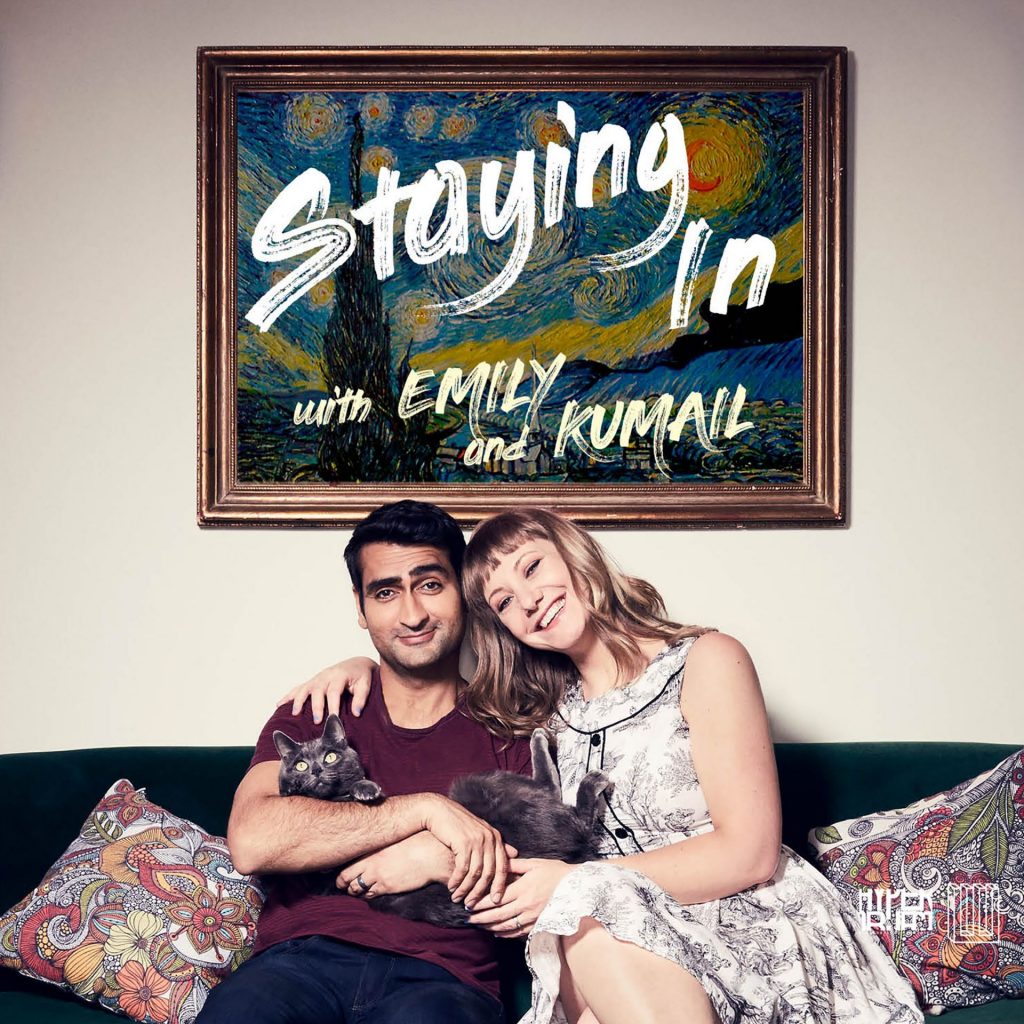 If you’ve ever seen Silicon Valley or Portlandia, you’ll know that Kumail Nanjiani is one hilarious comedian. Nanjiani and his wife, Emily Gordon, who co-wrote The Big Sick with him — a film based on the true story of them struggling with her sickness, are no newbies to serious health situations.

They’re making the most of their quarantine by giving us their hilarious 30-minute podcast “Staying In,” where they discuss everything from self-worth, to cutting each other’s hair, to gross pandemic food. Profits from the podcast are going to charities helping those impacted by coronavirus.

If you thought that you’d never see Stephen Colbert do The Late Show from his bathtub, you would have been correct, until COVID-19.

His weekday videos still have him wearing his trademark suit and talking about all his usual satire, but this time it’s called “A Late Show” and is filmed from the comfort of his backyard, living room, and yes, bubble bath. Access the hilarity via YouTube on weeknights.

Yesterday @Oprah discussed COVID-19 with @IdrisElba on the first episode of Oprah Talks. Catch up on the Apple TV app.

Fans of Oprah will be excited to hear they can catch the talk show queen’s wise words on the new launch her show “Oprah Talks: COVID-19” on Apple TV. Guests so far have included Idris Elba as well as DJ D-Nice — the DJ who is taking Instagram by storm with his live Club Quarantine sets.

Oprah has created her new show with hopes to answer the question, “How can we mindfully move through a crisis while holding onto ourselves and our humanity?”

If you’ve been missing your daily dose of Late Night with Seth Meyers, do not fret. The late-night star has also jumped on the host-from-home bandwagon, presenting his daily news “Late Night” on YouTube.

Meyers started out his home studio out of his garage, but said his nose got so cold he said it “was redder than a cartoon drunk”. He’s now filming out o the crawl space his attic. Stay tuned to see where he shoots next.

Nikki Glaser’s “You Up” podcast 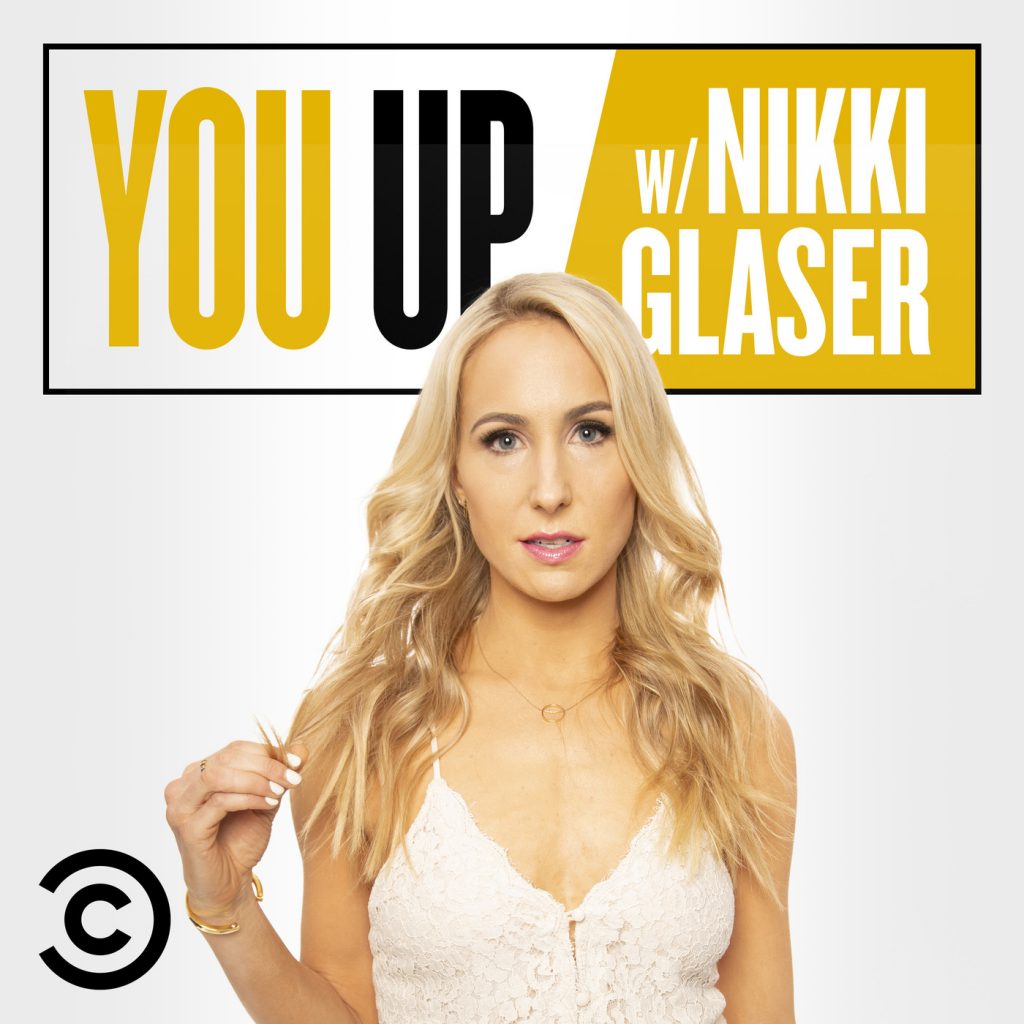 Comedian Nikki Glaser has been making us laugh with her “You Up” podcast since 2018, where she overshares about her personal life and “goes there” frequently. In light of all of us hunkering down, she’s now blessed us with a daily version of “You Up Daily.”

If you’re in need of some much-needed comic relief, this how you should be starting your day. The podcast is on Mondays through Thursdays at 7 am PST/10 am EST.