The Celebration of Light summer fireworks festival is Vancouver’s biggest event and the world’s largest offshore fireworks competition. Attracting 400,000 spectators to English Bay every night, the event returns for its 23rd consecutive year this summer on July 27, July 31 and August 3.

This FREE event, presented by Honda, is owned by the not-for-profit Vancouver Fireworks Society and produced by brand.LIVE. It is classified by the City of Vancouver as a flagship civic event and contributes more than $39-million in economic activity to the city every year.

The fireworks days are also a great opportunity to spend a day at the beach. If not, be sure to arrive at English Bay early to ensure a good and close-up viewing location of the fireworks. Don’t be late!

Another great reason to arrive early is the pre-show entertainment that will be returning to this year’s Celebration of Light. This includes the ShoreFest, with two stages located at English Bay Beach and Sunset Beach every fireworks night, and the Red Bull Air Show over English Bay on July 31 and August 3.

Car access into the West End and Kits Point will be limited to residents who can prove residency through car registration or a resident permit parking decal from 7:30 p.m. onwards on event nights. All other vehicles will not be allowed vehicle access into these two areas on event nights after closures. There will be strict enforcement of parking regulations in Resident Permit areas. 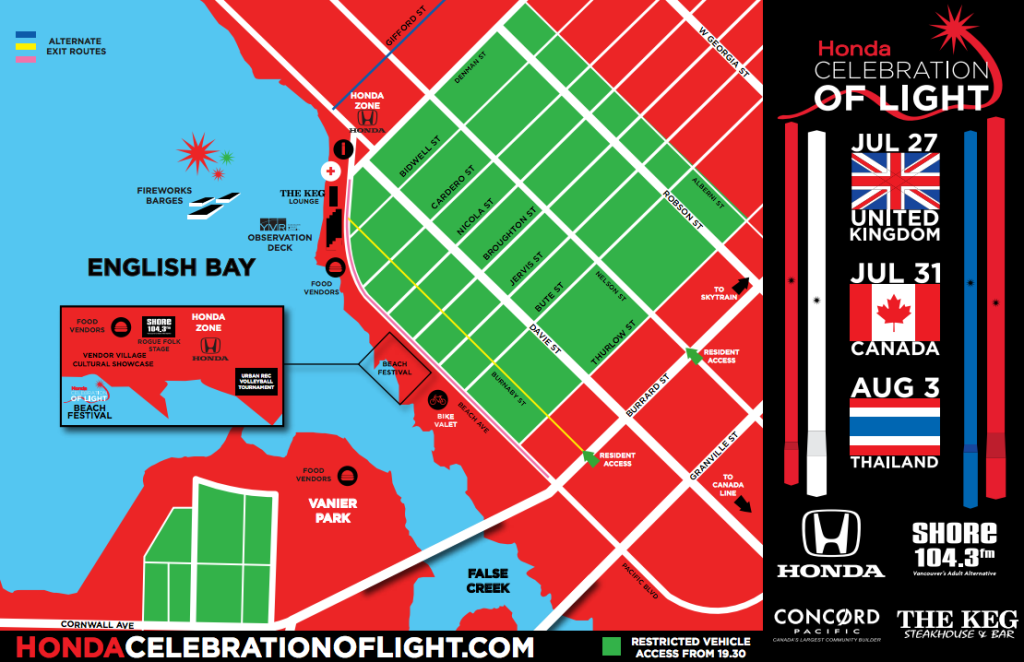 “Look up at the sky over English Bay, and enjoy the show!” The Celebration of Light fireworks displays begin at 10:00 p.m. every night, lasting 25-minutes. The fireworks will go on regardless of weather even thunderstorms.

The fireworks displays for each of the three nights are unique from the other and are synchronized to music on radio station Shore 104.3 FM. Bring a radio or listen to the simulcast online with your iPhone or smartphone.

The Celebration of Light is a fireworks competition and this year’s vying countries are:

The winner is decided by a panel of judges and public input through a web vote at www.hondacelebrationoflight.com during the festival.

For the best viewing location of the fireworks, come early to English Bay Beach in downtown Vancouver. But consider this tradeoff: it gets crowded and it can also be difficult to get home quickly when the crowds begin to storm out of the beaches towards public transit and their cars.

Other suggested close-up viewing locations in and around English Bay include Sunset Beach (Downtown Vancouver), the southeastern most section of the Stanley Park seawall (Downtown Vancouver), Kitsilano Beach, and Vanier Park. If you want to avoid the crowds, viewing areas further away at Jericho Beach may be suitable for you.

Alternatively, if you want a close-up and uncrowded fireworks viewing experience, consider the premium option of purchasing tickets to the bleacher seats at English Bay Beach. Tickets range from $44.25 to $54.75 per fireworks night: click here to purchase tickets.

To keep the City of Vancouver’s parks and beaches clean, please do the right thing by taking all of your garbage with you when you leave.

At the 2011 Celebration of Light, crowds in English Bay were stunned when Red Bull Air Race Pilot Pete McLeod buzzed over the beach in his single seater aircraft. A thrilling air show followed, with over 300,000 amazed upturned festival goers watching on. Two years later, Pete is back and better than ever in a brand new Eagle 540 Aircraft for two stunning shows above English Bay.

The Red Bull Air Show will fly above English Bay on the fireworks nights of Wednesday, July 31 and Saturday, August 3. Both shows will begin at 8:10 p.m.

SHOREfest at the Celebration of Light

SHOREfest is now entering its 5th year as one of Vancouver’s largest, free community concert series.

Beginning in 2009 in conjunction with the Celebration of Light fireworks, SHOREfest showcases some of Canada’s top musical acts in one of Vancouver’s most picturesque settings on the shores of English Bay. Over the course of three nights in the summer, hundreds of thousands of spectators gather at English Bay to enjoy the fireworks presentations while being entertained by acts on two SHOREfest stages.

Preceding the fireworks, SHOREfest (presented by SHORE 104) will host FREE concerts on two music stages in English Bay and Sunset Beach. Visitors to the beach will be able to watch some of the hottest names in Canadian music perform at Sunset Beach and in English Bay on fireworks days. 2013 will welcome some past SHOREfest favourite artists as well as bring more fantastic talent to their stages!

The Honda Celebration of Light has a downloadable app that will house all the information fireworks fans need.

In addition to general information about the fireworks, the app features:

The Honda Celebration of Light app is compatible for iPhone and Android and is available today! Updates will occur over the next few months as new content is added!

Be sure to download the Honda Celebration of Light app so you’re equipped with all the information you need when heading to the fireworks. 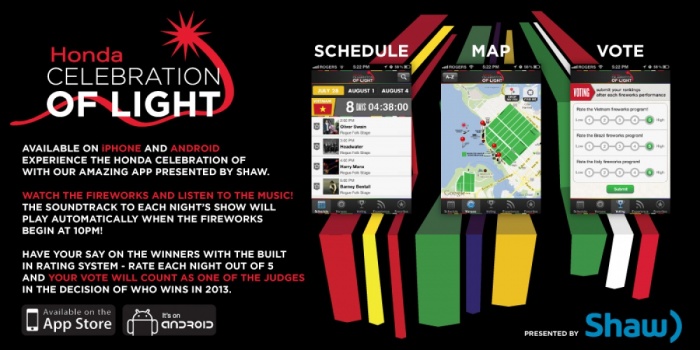