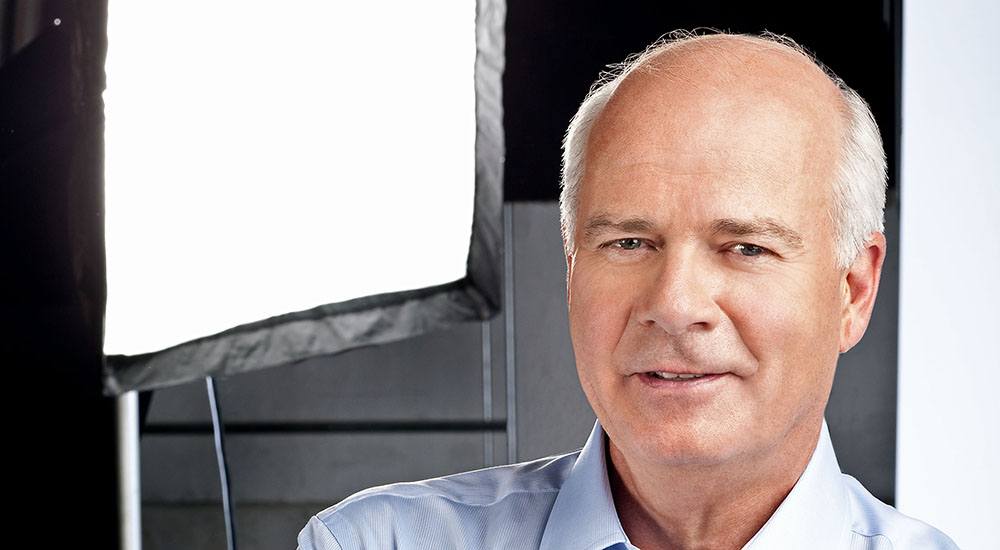 There’s no escaping it, Peter Mansbridge is a Canadian icon.

The veteran broadcaster has anchored The National for decades, trusted and authoritative, with a voice that could convince you everything was fine, even as the sky is falling.

He’s interviewed everyone from prime ministers to pop legends, and even been immortalized on film, voicing Peter Moosebridge, an animated Canadian newscaster in the movie Zootopia.

But it wasn’t always so easy, as Daily Hive discovered when Mansbridge sat down with us for a one-on-one…

“I never finished high school, never went to university and I left home when I was about 17,” said Mansbridge, the son of a civil servant, who was born in England and grew up in Asia.

“I was in the Navy for a while and that didn’t work out so well. So I left.”

At the age of 19, Mansbridge wound up working for an airline in Churchill, doing everything from taxiing planes to loading baggage.

Then one day in September 1968, everything changed.

“They had me announce the flight over the PA system inside the airport,” Mansbridge recalls.

“And there was a guy getting on the plane who was the manager of the CBC Northern service radio station in Churchill.”

That manager needed someone to do his late night radio music show – and Mansbridge’s extraordinary voice had convinced him he was the man for the job.

“I started the next day.”

‘I wasn’t going to blow this’

“I’d blown the opportunities I’d had… and then this came along and I was convinced that I wasn’t going to blow this, because I really enjoyed doing it.

“I had a plan while I was in Churchill, not only that this is what I want to do with my life but the job I’m in now is the one I want to do and work towards.”

If he had told anyone there, Mansbridge says, they would have laughed him out of the room. He had no journalism training or background.

“I was really self taught… I grew up in a family where we sat around and talked about what was happening in the world every night over dinner.

“To me those old conversations were just basically journalism – you ask questions, challenge assumptions – you tell other people what you learned.

“That was my training – having dinner with my family.”

‘I did because I loved it’

But Mansbridge stayed focused. After three years, he was moved to Winnipeg and after another five years, Mansbridge moved to Regina to work for The National for the first time.

Back then though, he was just the reporter out of Saskatchewan.

“I was working from a disadvantage and had to work that much harder than everybody else. But I did because I loved it and I wanted it to succeed and eventually it did.”

There’s no doubt about that. After stints in Ottawa, overseas and in Toronto, he began weekend anchoring – and the rest is history.

Having achieved his own professional goals, Mansbridge now hopes to help other young people progress as new journalists in a rapidly changing industry.

First of all, he says, the important thing is to think big – but start small.

“I started small. It couldn’t have been more small…And many of the journalists who I admire are ones who started in small locations.”

‘Storytellers will always have a job’

“Good storytellers will always have a job, because people want information and they want it told to them in a way they can connect to.

“It sounds simple, but it’s not simple – good storytellers don’t come along every day… That’s an incredibly important skill, even with a future that’s unclear.”

Mansbridge also warns anyone trying to make it not to be put off by failure.

“Don’t get down on yourself, don’t be surprised if you get rejected a few times,” he says.

“It wasn’t all easy for me. When I was trying to make the leap from local to national, I was turned down three times… But you learn.

“Maybe you weren’t ready, maybe you were ready and they didn’t recognize it so you’ve got to find better ways to make yourself recognized. But there will be other opportunities.”

An interview with Trump?

Remarkably, after 50 years as a newscaster, Mansbridge says he never thought of doing anything else.

“There are days when I’ve been depressed about how things are going – but never to the point of saying, ‘I gotta go do something else.’ It’s just been too much fun really.”

And it is fun. Sure, Mansbridge has held politicians and governments to account. On Justin Trudeau’s first day as Prime Minister, Mansbridge was by his side.

But he’s also been able to sit down with the likes of Ringo Starr, Bill Gates and Spike Lee.

Right now, he says, he’d like to interview Donald Trump. But, he says, the best interviews aren’t necessarily with the rich and famous.

“The interviews that I always remember the most are those with people whose names I couldn’t even tell you what they are.

“People who were caught in some extraordinary circumstance and whose story was not spin.

“It was all the real deal and they were able to tell it in such a captivating way. Those are really the ones who mean the most to me.”

As we finish up, Mansbridge shares one final piece of wisdom, fittingly passed on from a previous interviewee, a First Nation elder he spoke to back in the early days of his career.

“Basically life is like a river or a creek, where the water doesn’t go straight from A to B. It bounces off shorelines, it hits rocks, it gets backed up by fallen logs.

“All kinds of things happen, but it eventually ends up where you expect it to end up, and that’s the same as life.

And if you still have cable, The National airs nightly on the CBC News Network.