It has been almost two years since Season 2 of Top Chef Canada debuted on the Food Network. In those two years, a lot has changed for Chef Curtis Luk.

Originally from Markham, Ontario, Luk went to school to learn computer sciences, but he discovered a passion for cooking halfway through. Determined to finish what he’d started, he graduated with his degree, and went on to pursue a Master’s. But he also started to work in kitchens. His “classrooms” (Luk has no formal Chef’s training) included the kitchen of the Chateau Lake Louise, and one of Canada’s top restaurants: George in Toronto.

Then Top Chef came knocking. Luk was eliminated in the 7th round, but he made connections–notably with Trevor Bird, who invited him to come on board as the chef de cuisine at his newly-opened Fable.

Luk moved west. And then, just 10 months ago, Jason Leizert at The Parker, a new vegetarian restaurant, decided he was moving east, and owner Steve De Cruz asked Luk if he would take over. Luk had his own kitchen at last. 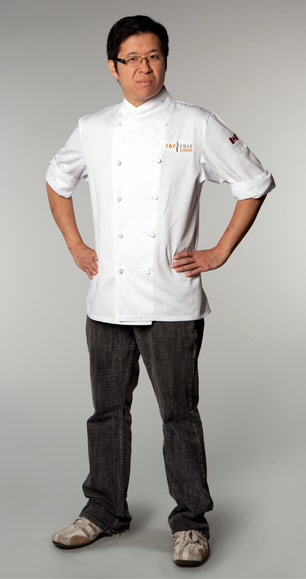 I met Luk for a coffee on a rainy tuesday in the brand-new Matchstick Coffee Roasters in Chinatown. The Parker is half a block away, in a neighbourhood that is diversifying and becoming more hip all the time.

On the eve of the debut of the fourth season of Top Chef Canada, I was most curious about how Luk’s life had changed in the last two years, and what competing of Top Chef had taught him.

“It taught me a lot about what I could do, and I learned so much about how I wanted to approach food in the future.” There is a kind of quiet confidence about him. “I went in as a sous,” he says. “It was both liberating and terrifying.” Unlike some of his fellow competitors, he didn’t have the experience of running a kitchen, or even of cooking food that was really, truly, his own.

“When you’ve been a head chef for a while, you learn to have faith in your style. One thing Top Chef taught me was to trust myself–to rely on my instincts–and to cook without over thinking it too much.”

Luk, now 30, is enjoying the West Coast lifestyle. He loves the mountains and the water that Vancouver provides, and also the freshness of the ingredients he gets to cook with here. The Parker is dedicated to being a zero-waste restaurant, and the menu is very much seasonally inspired.

It’s his goal to know as much as possible. “Knowing where you food comes from and that it’s grown in a sustainable manner is incredibly important.”

When he took over as head chef at The Parker, he was pretty much given carte blanche. The fact that the restaurant was vegetarian was a welcome challenge for him–he had to stretch further as a chef, and his food became very influenced by different cultures, with a deeper emphasis being placed on vegetables, grains, beans and legumes. He didn’t want his restaurant to be “the place where you go to get a salad.” It was his goal to make vegetarian dishes that were elegant, interesting, and unexpected.

His Roasted Cauliflower is one of the most popular dishes on the menu. A warm salad, it features roasted cauliflower and parsnips, and a comfit garlic-cashew cream. He does a risotto made with sunflower seeds, served with roasted onions, brussels sprouts, and oyster mushrooms. Among his more daring creations is a savoury souffle, Okonomiyaki-inspired, with fried enoki mushrooms, and a nori-umeboshi remoulade.

The concept is smaller, sharing plates, a vegetarian tapas of sorts, creating a lively, warm atmosphere in The Parker’s tiny 18-seat house.

One of the menu items at The Parker is called Degustation. This is when you put yourself in the chef’s hands, and he gets to create a meal for you. Luk loves this option–the challenge of it, and the opportunity to cook for others.

“As a chef,” he says, “you get to cook from your own taste and ethic. But you are always doing it n service of those who are eating it.”

And that is what being a Top Chef is all about.