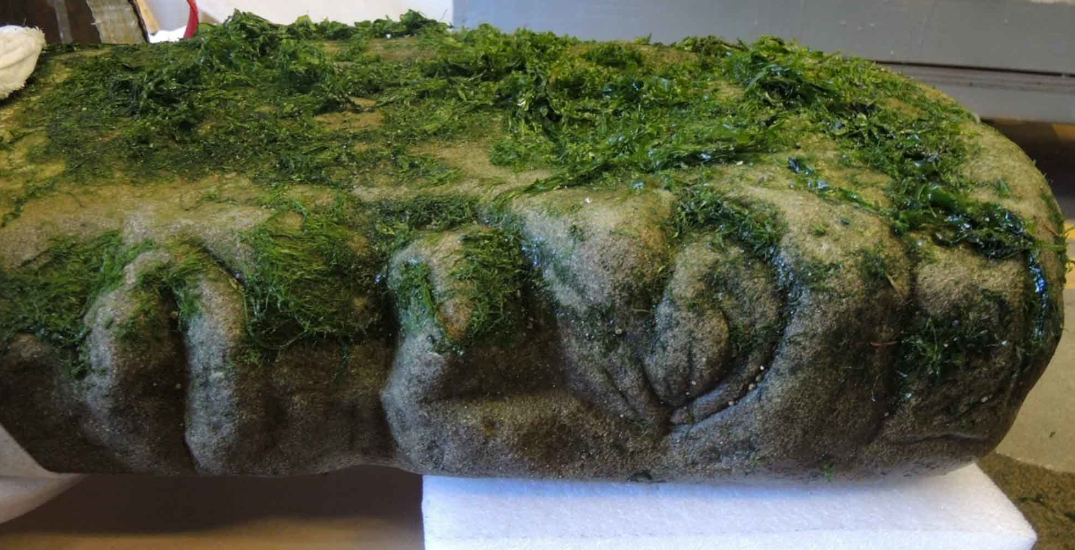 The Royal BC Museum has confirmed that a 100-kilogram carved stone pillar found on a Victoria beach last summer is an Indigenous artifact.

In a release, archaeology curator Grant Keddie said the museum would work with the Songhees and Esquimalt Nations to determine the most suitable home for the discovery.

“It’s an exciting find and a clear reminder of the long history of our people living in this region,” said Chief Ron Sam of the Songhees Nation. “We are looking forward to learning much more about the stone.”

Keddie said the stone was brought to his attention on July 12, when a local resident sent him photos of it lying on the beach below Beacon Hill Park.

The artifact is a large slab of sandstone, which the release notes is not found in the area and does not appear to have been carved with steel tools.

A few days later, on July 16, Keddie headed to the beach with some helpers and carefully moved the pillar to the Royal BC Museum.

According to the release, the curator already suspected the stone was an Indigenous artifact and reached out to the Songhees and Esquimalt Nations so they could assess the find.

Based on his research and consultations he’s had with local communities, Keddie believes that the artifact is a ritual pillar. It was likely used in ceremonies, such as the first salmon ceremony or those that involved feeding the dead, or for puberty rites.

He believes that the pillar once stood on the edge of the cliff, above where it was found, but was brought down by a large landslide.

“We hope to find more in the future, maybe under the landslide or in the water just offshore,” said Chief Rob Thomas of the Esquimalt Nation.

“Our hope is future discoveries may tell a fuller story of the stone’s history.”