When you walk into Cartems’ new (and you could argue, flagship) location, the overall ambience is airy, warm and buzzing. 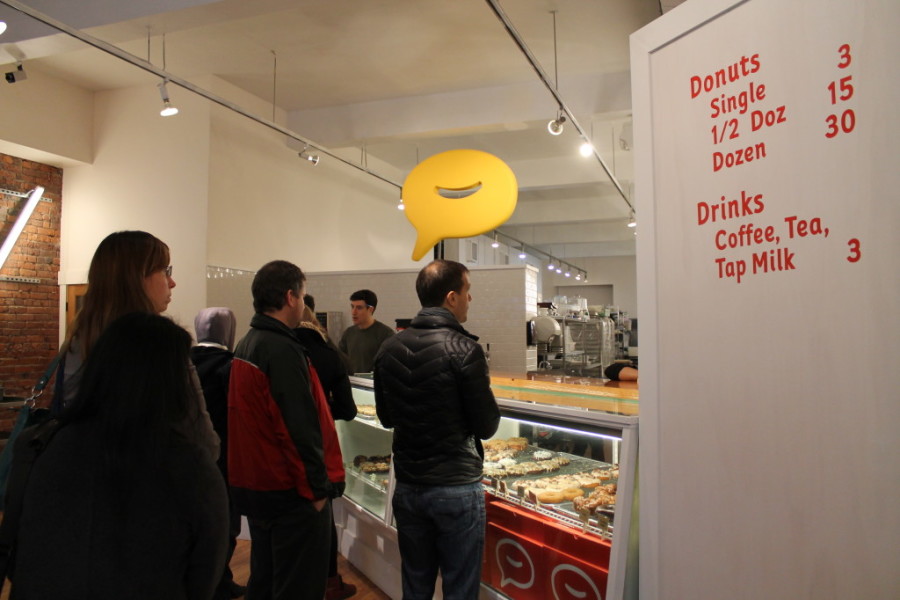 Just open a couple of weeks, the new location is a few blocks west of their original, pop-up shop location. The front third features a seating area for customers which juxtaposes industrial touches, like the exposed brick walls and the florescent lighting, with warm wood touches in the tables and floors. The owners did their best to pay tribute to the location, stripping wood from the walls, and turning it into tables and keeping (but refinishing) the original floors. Other tables were made from donated wood by a chef friend, and tree-stump stools came from a farmer in Maple Ridge. The owners literally had a hand in everything, from sanding and planing the wood, to coming up with the lighting design.

The back production facility, is clean and modern, tiled with white subway tiles, and divided from the front by a giant counter that features the dozen or so types of donuts that are on offering that day.

It’s quite normal to hear the staff (which includes part owner, Jordan Cash, as well on the front lines), asking questions of the customers and suggesting what donut they might like best.

The shop was hopping when I visited on Friday afternoon, but I managed to pull Jordan away for a quick chat. 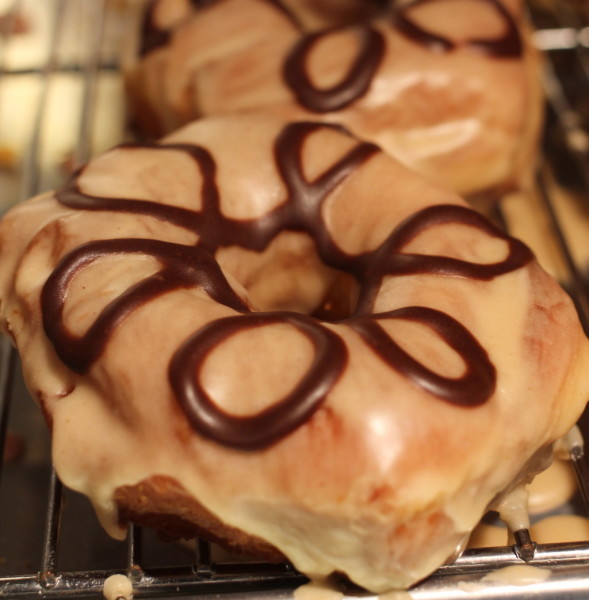 “Cartems,” he says, “was literally a dream. I was teaching English in Korea in 2002 and I had a dream about opening a donut shop called Cartems. The name doesn’t mean anything–it’s just made up. I scribbled the idea for the logo and the name down on a hotel drink coaster that was in my room. I still have it.”

Cash thought the idea could work. Vancouver had experienced the cupcake revloulution, but the gourmet donut hadn’t quite made it this far North yet. There was Top Pot in Seattle, and of course the granddaddy of all donuteries, Voodoo in Portland, but Vancouver was still primarily dependent upon Timmies for their donut fix. Cash convinced his friend, Rajesh Narine, then the pastry chef for Calabash to come on board, and Cartems was born.

It may have been Cash’s brainchild, but the business was given a leg up by the Vancouver food community. Sean Heather let them have his production facility on the corner of Hastings and Carroll, and in the words of Cash, “we just decided to go for it.”

One of the foundations of the business is to source locally, organically where possible, and to use the very best, highest quality, freshest ingredients. 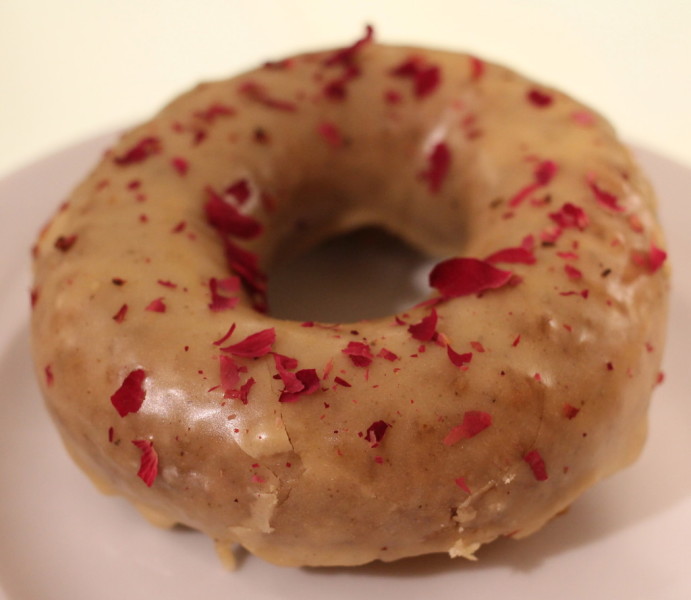 You’ll find your classics here: chocolate or vanilla glaze, caramel, cafe au lait. The most popular donut, however, is the earl grey, garnished with flower petals. They also do a bourbon bacon, garnished with bacon bits. Crazier flavour combinations include the bee sting, which incorporates parmesan cheese, is iced with a honey glaze, and garnished with black pepper, and the mexican mole, which is made with a dark chocolate infused with four different kinds of chilies, coriander, cumin, and star anise. 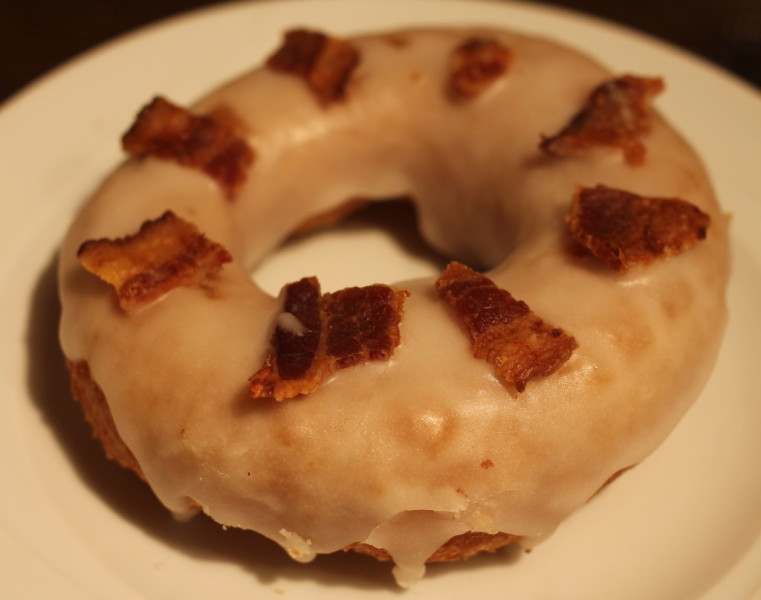 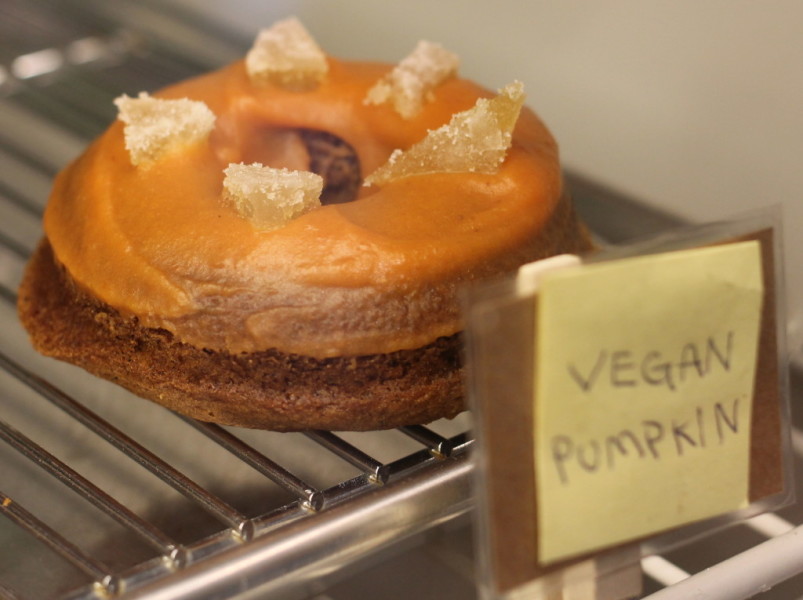 In terms of beverages, they have milk on tap (yes, you read that right!), tea from Jagasilk in Victoria, and pour-overs featuring beans from Matchstick Coffee Roasters.

They’ve come so far in just 18 months, but they still have lots of plans for donut domination to come. Cash says they want to explore donuts from around the world, and bring in more savoury donut applications. Donut-whiskey tastings may be in the works, and of course, there’s always the possibility of another location.

“I believe in keeping it simple,” Cash finishes. “Do one thing and do it well.”

Judging by the long lines and happy customers, Cash has uncovered the secret to donut success.