Cars of Summer is a series about cool cars, cool places and cool people in the Vancouver area. This week we visited Ships to Shore 2011 in Steveston, where we ran into pirates, boarded ships and took the 2011 BMW 355is for a tear on the back roads of Richmond.

The Richmond Auto Mall Courtesy Shuttle pulled up at exactly 1145, just like the sign said it would. After a morning of mishaps like arriving at the wrong dealership and having to take transit, this was a welcome sign.

“There’s a lot of rabbits out there, prolly a few hundred by now.” Said the shuttle driver. “People just let ’em go when the kids get tired of ’em. ‘Caused thousands in damages to the landscaping, last year.”

After processing my dubious credentials, Open Road‘s marketing guy tossed over a fob with the familiar blue and white propeller logo. Waiting just outside the front door was a leggy blonde who’d drop her top at the push of a button and had 300 ponies under her skirt.

The 335is convertible is one of those cars designed to take care of the driver by being as accommodating as possible. Heat resistant leather seats nestle the driver comfortably behind the dash. A 8.8″ screen displaying the standard entertainment and navigation status in a conveniently accessible split screen mode, even instructs on the finer points of getting the car into gear using the 7 speed, electronically controlled Dual Clutch Transmission. The shifter, much like a custom made joystick, responds with a flick of the wrist and effortlessly puts the car into gear.

Watching for any rodents about to dart into the street, I nudged the gas and sped my way to Gerry Park at 0 to 60 in just over 5 seconds. It was good to know the 13 inch pizza pie diameter brake rotors could, if necessary, reign in the exceptionally well behaved, turbo charged inline 6. The remarkably intuitive (and vastly improved) i-Drive system had me picking songs on the XM radio within about a minute and as the volume was cranked on some NWA, I made my way through the lazy noon hour Richmond traffic

Steveston Highway, a long straight section of road was perfect for a slalom between cars which slowed down noticeably as the Leggy Blonde strode past with purpose and intent. It was apparent she wanted to be pushed, but in the interests of keeping things wholesome, (at least for now) she maintained a speed reasonable enough to straddle the gray area between just over and way over the limit. The affections of an ornery cop not something of any particular interest.

A quick flash of the dubious credentials and access was gained  to the media and staging area, parking was a breeze after waiting for a couple of teenagers unloading a recycling bin off a half ton. What amounted to a bike path led me to the appropriate vantage point. 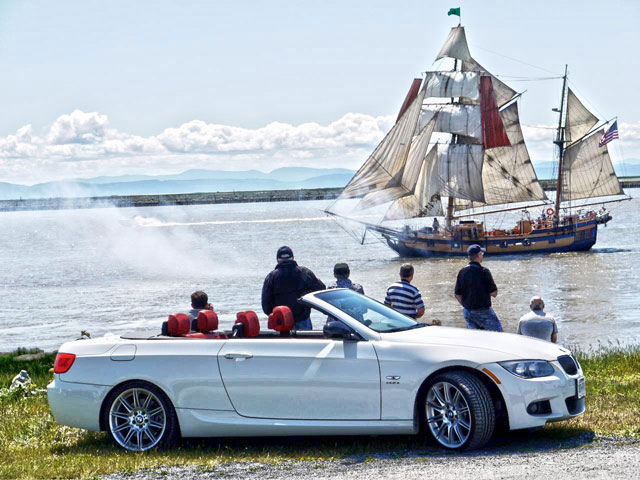 Now here’s the thing about pirate ships: What we see in film and pop culture folklore has little to do with reality. The vessels of yore weren’t massive galleons with crews of a hundred capable of plowing through a kraken. No, pirates are smarter than that. Small, fast and maneuverable is what any buccaneer worth his salt would choose. Something like The Hawaiian Chieftain. In its late eighteenth century heyday, a topsail ketch could cruise for thousands of nautical miles at up to 15 knots. Agility and the capability to enter small, shallow ports in a hurry and leave just as fast were the hallmarks influencing a privateer’s choice of ship. Even today, modern pirates pick small, powerful vessels designed for speed and stealth over size and strength.

While The Chieftain may look like an oldschool ship, she was built in the late 80’s and has a steel hull. Her primary function is to provide educational cruises and visits to ports along the coast. In fact, if one were so inclined, one could book passage on the ship and train with the crew. The Chieftain’s companion ship, The Lady Washington, is a modern recreation of the original from 1750. Lady Washington’s storied history tells of how she was a pioneer of Pan Pacific trade and the first American ship to visit Hawaii. Prior to the heady days of Hong Kong’s black pearl trading mania, The Lady served her country as a privateer in the American Revolutionary War. No doubt exists of the sordid tales she would tell, of stormy nights and drunken brawls, or the pure adventure of discovering new frontiers unseen by human eyes. 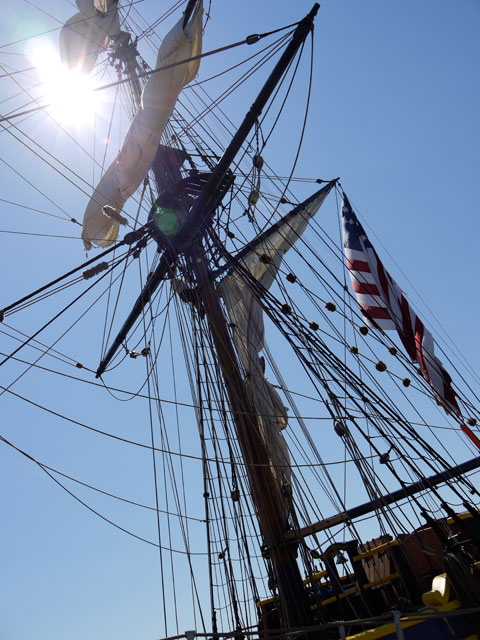 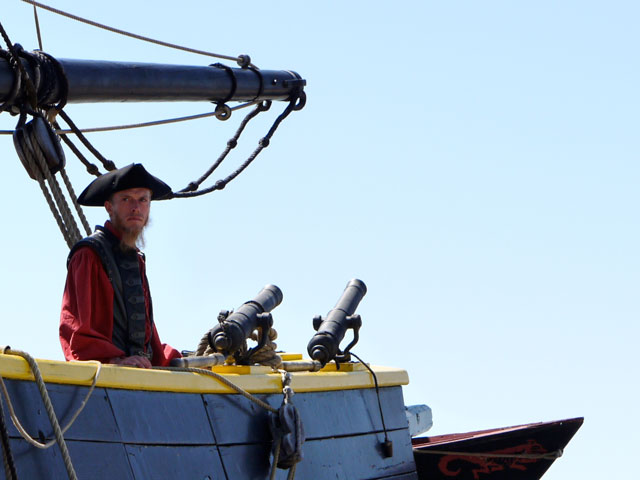 With the June sun beating down, I made my way to the dock for a closer inspection and to perhaps engage in a parlay with one of the captains. Unfortunately, I found only a few surly deckhands, weary from their undoubtedly exhausting voyage dealing with landlubbing tourists, eager to pay for a chance to get their sea legs about them. While the dock may have proven fruitless, with only some photos snapped, a surprise awaited back by the Leggy Blonde. Two happy actors posing as pirates! A few “Yarrs” later they pointed their pistols right at my face. The hilarious irony of this situation did not escape me. Of course two actors would hold me up for a white BMW convertible. Luckily, with the help of some fast talking and the requisite flash of my dubious credentials, I was able to negotiate the return of the car for the paltry sum of $50.00. 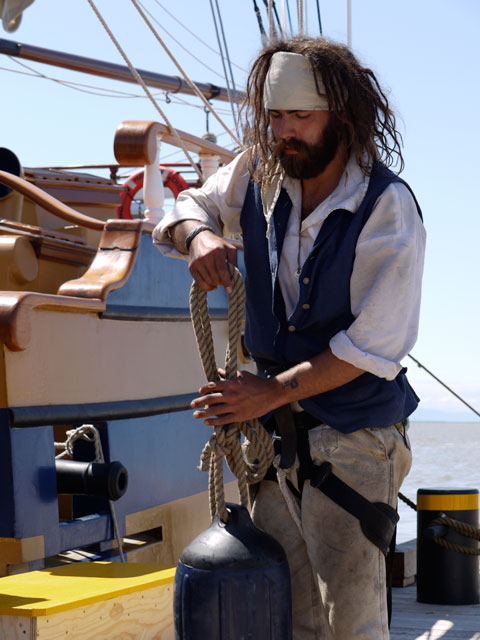 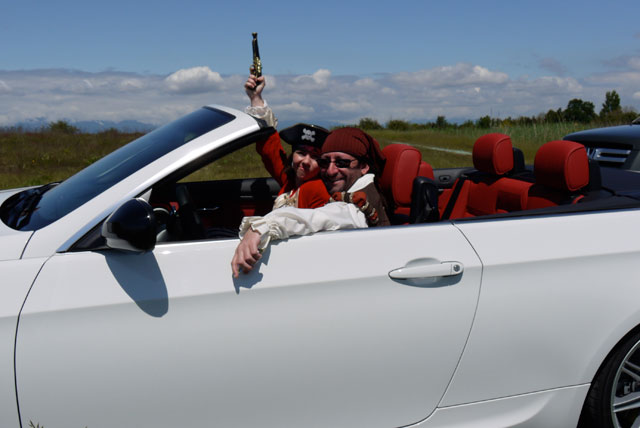 Knowing my time in Steveston was coming to a close and wishing to make a fast getaway, I tore down the highway in search of a nice long stretch of quiet asphalt. With time running out, a play was made for a deserted stretch of Jacobs Road. No oncoming traffic, nothing in the rear and nothing up my sleeve. The sport tuned exhaust howled as the accelerator kissed the floor. Pushed back into the seat, I looked with some wonder at how fast the needle swept past 100 kilometers per hour. Even with the top down and speeding along at a perfectly reasonable 160, the wind through my hair felt like a pleasant breeze. Precisely as the German engineers intended. Sadly, the road was quickly coming to an end and a gentle application of the brakes brought reality to the forefront once again, several “Speed Kills” signs reminding drivers of the perils associated with operating a high performance automobile.

Parking the Blonde brought on the sudden awareness of  exhaustion. From Sun, Surf and Speed. Tossing the magical fob back to my contact at Open Road, I thought to myself, about how spoiled I was going to get over the next couple months. With the weather finally getting nice there was no doubt; The Cars of Summer  await and someone’s gotta drive them. It could even be you.