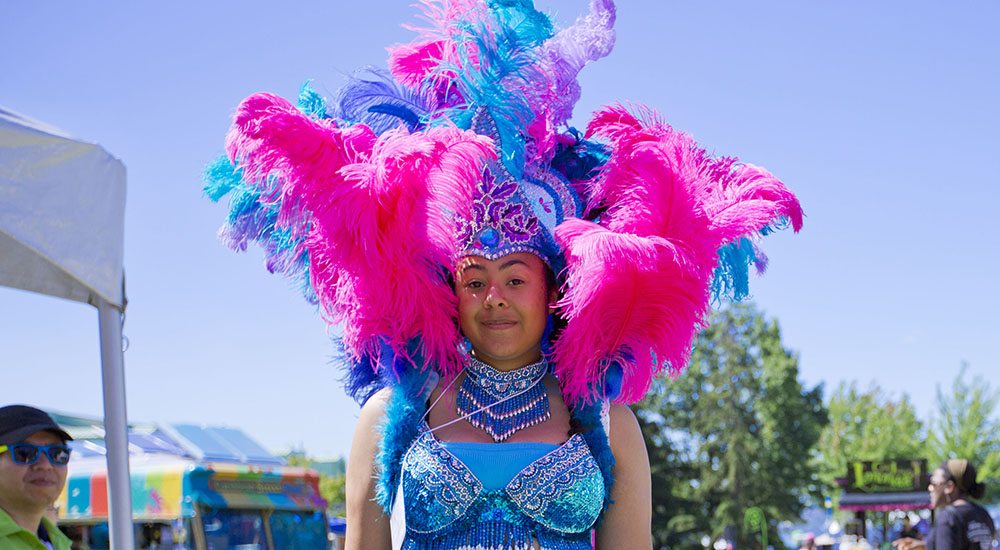 Caribbean Days Festival is hotting up North Vancouver Waterfront Park in July, drawing in crowds of exuberant fun-lovers for parades, dining, and dancing in the sunshine.

Presented by the Trinidad & Tobago Cultural Society of BC, the festival began back in 1987 after the gathering of a few Caribbean friends for a picnic.

Decades later, it is a great way to appreciate Caribbean culture, music and style, and is the largest Caribbean event in the region, with tens of thousands attending every year.

The organizers of the festival, which will take place on the weekend of  July 29 to 30, say on their website that “it is possibly the largest cultural event of its type in BC, period.”

The festival begins with a Multicultural Street Parade, which will paint the town red as costumed revellers rollick down the streets of North Vancouver.

The Parade will kick off Saturday, July 29 at 10 am at Lonsdale Avenue and 13th Street, heading down Lonsdale to Esplanade, before turning west to arrive at Waterfront Park and arriving at Forbes and Esplanade.

The festival will then be divided into North and South zones, with each area showcasing its own attractions during the weekend.

Savour spicy Caribbean food at the food concession area and relax at the large beverage garden with an ice cold drink in the North side of Waterfront Park.

The Festival will be divided into zones. (Caribbean Days Festivals)

Meanwhile on the South side, be entertained by dancers and other performances, including bands playing Reggae, Calypso, Latin and other international sounds.

In the Family Zone, there’ll be face painting, a children’s playground and other activities.